Mixed reactions in Tehran to opening of UK embassy

Iranian police confront members of the Basij as Britain reopens its embassy in Tehran. 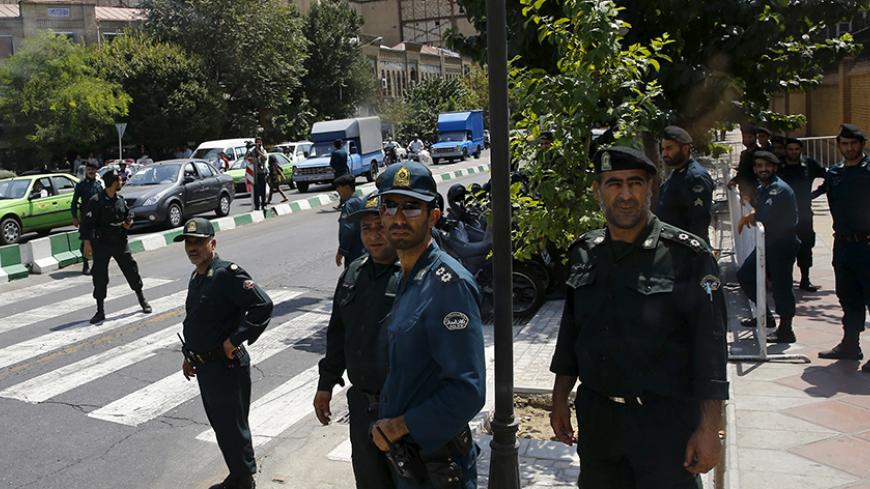 TEHRAN — If one thing stood out at the reopening of the British Embassy in Tehran on Aug. 23, it was the immense number of police cars and special guards stationed along Ferdowsi Street. The last time there was this kind of security presence, all the way from Ferdowsi Square a few hundred meters to the north, it was in the turbulent aftermath of the disputed 2009 presidential elections.

The muscle flexing appears to have been in response to calls for a protest in front of the diplomatic compound made by members of the paramilitary Basij. This happened after news of the reopening of the embassy first began to spread through social media. Notably, Britain decided to cut its diplomatic presence in Iran in November 2011, after its embassy was stormed by hard-liners.

Al-Monitor was present at Ferdowsi Street on the afternoon of Aug. 23, when the Basij protest was slated to be held, and can confirm that the rally drew less than 70 people. Undoubtedly, the rally was one of the most unsuccessful experiences the Basij has had in organizing protests during the past two decades. Alireza, a 26-year-old Basij member who showed up for the rally and preferred not to disclose his full name, told Al-Monitor, “The UK is evil and has come to take our land. Next, it will be the US’ turn. We will not allow [President Hassan] Rouhani to sell out our country.”

Traditionally, gatherings held by Basij and the hard-line group Ansar-e-Hezbollah — including unlicensed protests — are met with a soft response from the police and special guards. This time, however, there was notable violence on the part of the authorities against Basij members, with pushing and kicking. A number of Basij members were also arrested and taken to police vans.

The area surrounding the British Embassy is the main center for currency exchanges in Tehran. Manouchehr, 52, who also preferred not to disclose his full name, is one of many exchange office owners on Ferdowsi Street. With his unit’s window shades only halfway opened out of fear of the protesters, Manouchehr couldn’t do much, except smoke cigarettes. He told Al-Monitor, “When the British Embassy opens, it means our relations with Europe have truly normalized. This is very good. Good job by the police in dealing with these hooligans and not letting them ruin Iran’s reputation again.”

At about 5:30 p.m., 90 minutes after the beginning of the rally, police finally managed to remove all Basij members from Ferdowsi Street. This time, the protesters did not succeed in throwing rocks or any other objects toward the embassy, and were confined to shouting slogans against Britain and the Rouhani administration, such as “Down with the UK!” and “Down with moderates!” Another slogan, vividly illustrating just how isolated members of the Basij feel in Iran’s current political structure, was addressed to the founder of the Islamic Republic: “[Ayatollah Ruhollah] Khomeini, you be witness; we voiced our opposition!”

Philip Hammond is the first British foreign secretary to visit Iran in the past 12 years. From the early hours of Aug. 23, a considerable number of Iranian reporters and cameramen gathered in front of the embassy in an attempt to cover the ceremony, but none were given permission to enter. The Iranian government only officially confirmed the embassy’s reopening and Hammond’s visit Aug. 22, and said diplomatic relations will be elevated from nonresident to resident charge d’affaires. The announcement was made by Majid Takht-Ravanchi, deputy foreign minister for European and American Affairs, at a news conference Aug. 22. Ravanchi, however, did not say when the two countries would step up relations to the level of ambassadors.

Britain downgraded ties in November 2011 after a group of protesters and student members of the Basij stormed the downtown Ferdowsi Street compound. The ransacking came in response to the imposition of financial sanctions on Iran. The same day, another group of protesters targeted the British diplomatic compound in Qolhak, in northern Tehran.

Steps toward the embassy reopening have been taken for over a year. Rouhani's meeting with British Prime Minister David Cameron at the UN General Assembly last year, the first encounter between an Iranian president and a British prime minister since the 1979 Islamic Revolution, was considered a significant step toward improvement of ties and re-establishment of embassies.

Now, focus appears to be on reconciliation. "The two countries have different viewpoints which can be resolved through interaction and common understanding," Iranian Foreign Minister Mohammad Javad Zarif said, addressing a joint news conference with his British counterpart in Tehran on Aug. 23.

Shireen Hunter, an international relations professor at Georgetown University, explained Tehran's motives for improving relations with London: "Iran’s main interest in resuming reasonably good relations with the UK is that it will contribute to the completion of the trend toward Iran’s return to the international community. It could also have some economic benefits in that UK firms might be interested in investing in Iran, and also encourage UK tourists to travel to Iran. However, the full expansion of relations would also depend on the UK."

The Fars News Agency reported that the British foreign secretary, after mentioning British-Iranian relations, said, "Iran is an important country in a strategic region." Furthermore, Hammond said the reopening of embassies should not be seen as a symbolic move, but as highly important for establishing relations in other areas. Of note, after meeting with Zarif, Hammond tweeted: “good discussions with #Iran FM @JZarif on regional security. Shared commitment to tackling #ISIL” [the Islamic State].

In an interview with Al-Monitor, professor Arshin Adib-Moghaddam of SOAS, University of London, brought up ways in which relations could be improved: “In particular, academic and student exchanges should be facilitated to create a firm base for the future. Obviously, British companies will have an interest in accessing Iran's consumer market and to equip the country's oil and gas sector with cutting-edge technology.” He added, however, "But Iran has equally important assets to offer, in particularly in terms of a security dialogue for a viable, peaceful security architecture for West Asia and North Africa.”