The British foreign secretary visited Tehran for the reopening of the United Kingdom's embassy after four years, but his comments about Israel and Iran drew sharp criticism from Iranian officials. 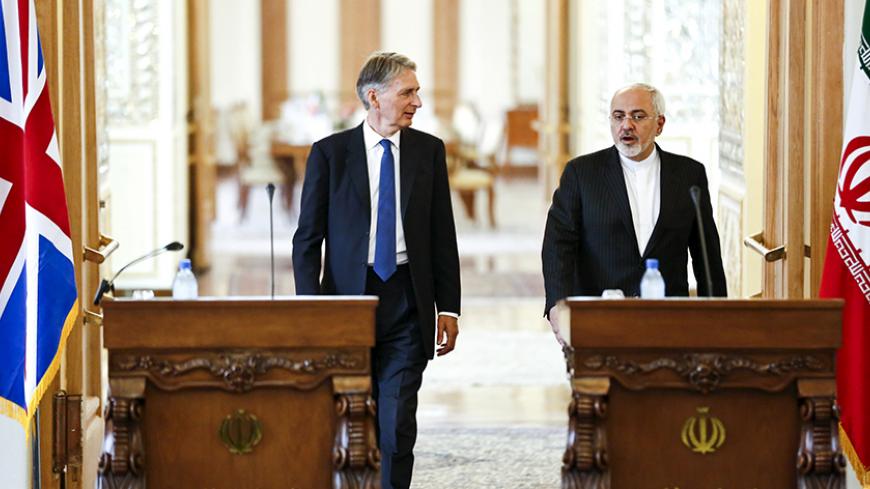 British Foreign Secretary Philip Hammond (L) and his Iranian counterpart Mohammad Javad Zarif arrive for a news conference after a meeting at the Ministry of Foreign Affairs in Tehran, Aug. 23, 2015. - REUTERS/Raheb Homavandi

The reopening of the British Embassy in Tehran can be counted as one of President Hassan Rouhani’s midterm accomplishments and the fulfillment of a campaign promise to improve relations with the world. The embassy was closed under former President Mahmoud Ahmadinejad in 2011 after hard-line university students stormed the embassy in protest against the sanctions against Iran for its nuclear program.

At a joint news conference, Hammond called the closing of the embassy a "low point” in UK-Iran relations but said after Rouhani’s elections, relations “steadily improved, step by step." His comment that “Iran is, and will remain, an important country in a strategically important but volatile region” was welcomed by Iranian analysts.

However, Hammond had also earlier told the BBC that on some issues Iran and the United Kingdom continue to have “substantial policy differences.” His comments that Iran has shown a more nuanced approach with Israel and “what we’re looking for is behavior from Iran, not only towards Israel but towards other players in the region” has caused a controversy inside the country.

A Fars News headline quoted Hammond as saying “Iran’s position with Israel has changed a little” and that “Iran is no longer a threat to Israel.” However, the text of the article did not include those explosive and incorrect translations.

When asked about Hammond’s comments at a news conference Aug. 25, Rouhani’s media adviser Mohammad Reza Sadegh said, “The position of the Islamic Republic of Iran regarding the Zionist regime has always been clear and will remain clear.”

Tasnim News Agency reported that Marzieh Afkham, spokeswoman for Iran’s Foreign Ministry, denied that during Hammond’s visit “there were negotiations about the Zionist regime or that Tehran has a different position regarding this regime.”

Iranian member of parliament Fatemeh Alia said on the parliament floor Aug. 25, “On our soil, UK’s foreign secretary spoke with BBC radio and said we will judge Iran’s approach with respect to Israel based on their actions and Iran is no longer a threat to Israel. Presumably, as those who justify [his comments], our foreign minister will once again say the comments are for domestic consumption.”

Alia also criticized Zarif by saying he “didn’t dare use the word the Zionist regime” in his news conference with Hammond. She added, “Unfortunately, some of our officials are faithful and are not traitors, [but] have committed crimes in pursuing normalization in relations with America and Britain.”