Iranian President Hassan Rouhani has been criticized for comments made by UK Prime Minister David Cameron after the two conducted a "historic" meeting. 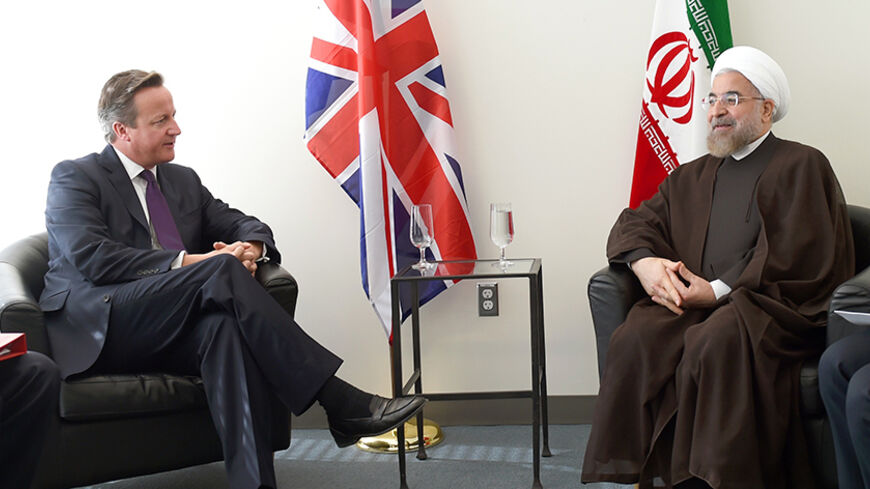 Iranian President Hassan Rouhani is being criticized for meeting with UK Prime Minister David Cameron after the latter made critical comments about Iran during his UN General Assembly speech. Cameron and Rouhani's meeting was the first time for the heads of state of the two countries to meet since the 1979 Iranian revolution.

The meeting was hailed as a “historic meeting” by Reformist newspapers. However, during his address later that day Cameron said “severe disagreements” still remained between the two countries, such as Iran’s “support for terrorist organizations,” their nuclear program and the “treatment of its people.” Cameron, however, did leave hope for cooperation on regional issues and said, “Iran should also be given the chance to show it can be part of the solution, not part of the problem.”

A member of parliament’s National Security and Foreign Policy Committee, Ismail Kowsari, said both Rouhani and Foreign Minister Mohammad Javad Zarif have to explain what “benefits” the meetings with Cameron had, given that “some hours after the meeting David Cameron condemned Iran for supporting terrorism from the podium of the United Nations.”

Kowsari said, “We expect our officials to be more vigilant and not become imprisoned by these media games.” He asked, “What is the logic behind these meetings?” He suggested that Zarif should be called to parliament to answer for these meetings and said that Rouhani and Zarif were behaving “in a rogue manner,” given that “the Supreme Leader [Ayatollah Ali Khamenei] has said that he is not hopeful about these [nuclear] negotiations.”

Raja News wrote that while Rouhani has never condemned the UK for “a century of hostile acts against the Iranian people,” he meets with Cameron and “gives him the consent” to make such statements against Iran. The article said that it was only “natural” that Cameron would make such comments after this meeting.

The article stated, “It’s not clear how far this administration’s extreme optimism with the enemy will go,” and said, “Rouhani’s and Zarif’s smiles” have only made countries more hostile toward Iran and increased US sanctions.

Raja News’ sarcastic headline also took a shot at Reformists who supported the meeting: “The result of new dimensions of a ‘historical’ meeting, ‘confidence building’ and ‘avoiding conflict’” became clear when Cameron said, “Iran supports terrorism and must change its treatment of its people.” They wrote that Rouhani political affairs adviser Hamid Aboutalebi had tweeted in support of the meeting and had taken screenshots of the first page of Reformist newspapers, all of those which chose the Rouhani-Cameron meeting as their top story, accompanied with the Cameron and Rouhani sitting in front of their respective flags.

Iran’s Foreign Ministry spokeswoman Marzieh Afkham also condemned Cameron’s comments. “It’s unfortunate that a government that with its own actions and support of terrorists, and has infected our region and the world with the evil of [IS] gives judgment on our country, which has been at the forefront of fighting against this phenomenon,” she said.

Jahan News said that Cameron was “interfering” in Iran’s domestic affairs” and criticized his “harsh statements” and Rouhani’s “silence” in reaction to those statements. While Rouhani has not commented on Cameron's address directly, during his UNGA speech, he blamed “certain foreign intelligence agencies” for the spread of terrorism in the region and emphasized that the fight against terrorism should be led by Middle Eastern governments.

by Ismail BELLAOUALI with Philippe AGRET in Rabat and Marie GIFFARD in Madrid | AFP | Jun 24, 2022
END_OF_DOCUMENT_TOKEN_TO_BE_REPLACED