What's US really doing at Turkey's Incirlik Air Base?

It is still not clear what agreement has been reached on the use of the Incirlik Air Base by anti-IS coalition planes. 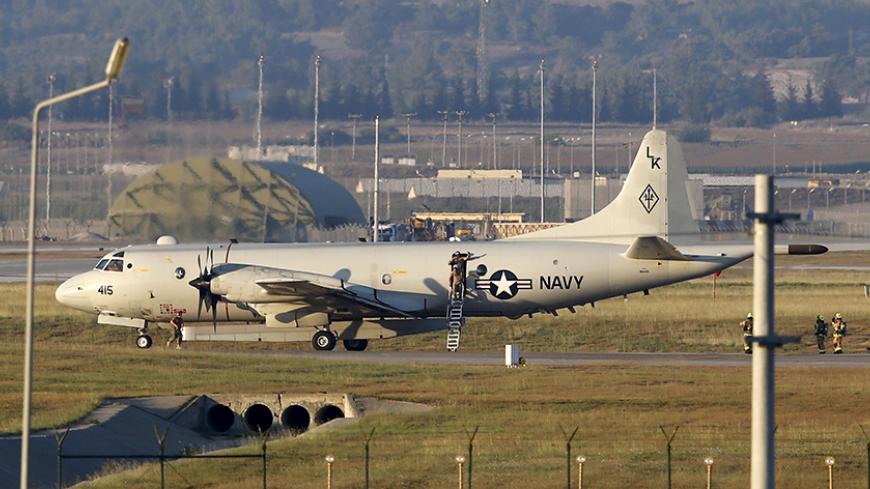 Crew members exit a US Navy P-3 Orion Maritime patrol aircraft after it lands at Incirlik Air Base in the southern city of Adana, Turkey, July 25, 2015. - REUTERS/Murad Sezer

Turkish Foreign Minister Mevlut Cavusoglu said in an Aug. 5 statement, “We have come a long way on the opening of the Incirlik Air Base. Turkey and the United States will soon launch a comprehensive war against [the Islamic State (IS)]." The news made headlines the world over.

Seven hours later, a statement from the US Department of Defense reported a “deadly attack from the base in southern Turkey” on IS targets near Raqqa. This attack was most likely carried out by an armed US unmanned aerial vehicle that was already deployed at Incirlik.

A foreign journalist asked, “Has it begun?” My reply was: “If you mean armed UAVs, then, yes. But if you mean [whether] the US combat planes are using Incirlik for operational missions, not yet.”

The true blow to IS will come from coalition warplanes led by the United States taking off from Incirlik on combat missions. The strategic bargaining between the United States and Turkey on this issue is still going on, although both parties appear to be tired.

Although the story of the Incirlik base, near the major Turkish city of Adana, goes back to the Status of Forces Agreement between NATO members (Turkey became a member in 1954), its current status is based on the Defense and Economic Cooperation Agreement of March 20, 1980.

According to that agreement, which regulates US military assistance to Turkey and US use of military facilities in Turkey, the United States fully recognizes Turkey's total sovereign rights over Incirlik and agrees that the United States will not deploy military aircraft for operational duties outside NATO missions. The agreement also states all air traffic and control services at the base are regulated by the Turkish air force. That is why Incirlik hosts the 10th Tanker Base command under a Turkish general and the US 39th Airbase Wing is commanded by a colonel. Both units, which have no combat duties, are tasked with providing logistical support for the Turkish and US air forces.

Turkish warplanes frequently use Incirlik. For the past two years, Turkish F-16s have been using it for air patrol missions.

US decision-makers see Turkey's allowing Incirlik to be used by US warplanes for combat missions as a test of the country's sincerity. The Turkish side hopes to use the US need for Incirlik as an ace in the hole in its clashes with the Kurdistan Workers Party (PKK) and in an effort to thwart progress in northern Syria by the US-supported Kurdish nationalist Democratic Union Party. But both the United States and Turkey are truly tired from the strategic haggling that has been going on for four months.

How are the parties trying to overcome the current rift? Al-Monitor learned the answer exclusively from security sources in Ankara:

Speaking on condition of anonymity, the security sources emphasized that there actually is close cooperation between Turkey and the United States through the Office of Defense Cooperation (ODC), working out of the Turkish Armed Forces Sports School in Ankara on UAV flights, intelligence coordination and shared targeting in northern Iraq. An ODC team made up of Turkish and American officers coordinates all reconnaissance and surveillance operations, which are reviewed in weekly meetings held at Turkey’s General Staff headquarters. To overcome the confidence lost over Incirlik, the intention now is to set up an ODC cell at Incirlik similar to the one in Ankara.

The security sources said there is already a cell of Turkish and American personnel operating at Incirlik to regulate armed and unarmed UAV flights. The coordinates of the UAV flights and their targets are jointly planned by the team, while the Turkish side makes the final decision. There are now plans to expand the coordination cell at Incirlik to handle the operations of coalition warplanes, which are expected to join the almost-certain massive anti-IS operation.

This is what Turkey wants for Incirlik:

Combining the Iraqi coordination cell in Ankara with the Syria coordination one at Incirlik signifies the pooling of an entire range of US-Turkish air missions in Syria and Iraq. Iraq and Syria will thus be a single area of operations. The emerging concept is coordinated planning of Turkish air operations against the PKK in Iraq and US attacks against IS. The United States and Turkey would know all the details of each other’s operations in Iraq, but not interfere with each other.

The United States has three main concerns: In Turkey's turbulent political environment, it does not want to see a repeat of 2003, when the Turkish parliament unexpectedly refused to allow the Americans to open an Iraqi front from Turkey.

That shock cost the United States two weeks and billions of dollars. The Americans are therefore wary of Turkey’s political tangles and sudden U-turns by the Turkish government.

Another US fear is the politicizing of its anti-IS efforts by Turkey’s air attacks against PKK targets in Iraq. The United States wants to be a partner in Iraq and Syria in the context of combating IS and doesn’t want a sensitive and extremely politicized issue such as the Turkey-PKK conflict to affect its military struggle against IS.

The United States is also being cautious of the risk of the Turkish military not taking the struggle with IS seriously enough. If it does not, it could create a grave threat to the success in operational activities on the ground.

In a nutshell, the Incirlik puzzle has not been solved, despite some progress being made.