Patriot batteries deployed in Turkey against possible air and missile threats from Syria are being withdrawn in controversy. 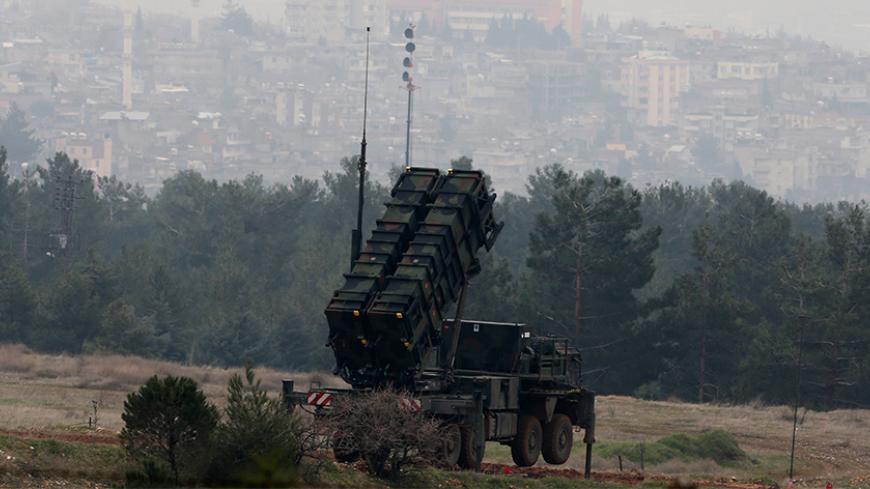 The Patriot system is pictured at a Turkish military base in Kahramanmaras, Jan. 31, 2013. - REUTERS/Murad Sezer

It looks as though the departure of Patriot missiles from Turkey will be at least as controversial as their arrival in 2013.

The United States and Germany have decided to withdraw their Patriot anti-ballistic missile systems, which were deployed in Turkey to defend against possible air and missile threats from Syria. Germany’s intention to remove its system from Turkey’s Kahramanmaras province has been known for a while. But the US decision came as a blow to Ankara.

In explaining their actions, German and US officials have avoided any mention of political motivation.

German officials said two factors influenced their decision: changes in the Syrian threat situation and technical reasons. German Defense Minister Ursula von der Leyen said on the ministry's website, “Since 2013 the structure of threats toward Turkey from Syria has changed. At that time the primary threat was President Bashar al-Assad. Now the real threat is the [Islamic State].”

US officials cited the need for technical updating for their decision not to send in new units after October. Pentagon spokesman Jeff Davis stressed that the move does not indicate any change in relations between the United States and Turkey or the US commitment to Turkey’s defense. If any new threat is detected, Patriots will be deployed again rapidly, he said, noting that ships equipped with the Aegis missile defense system are deployed nearby.

Turkey’s relations with the Assad regime became extremely tense in 2012 after the Syrian army shot down a Turkish RF-4 warplane in June and killed five Turkish civilians in artillery fire in October. Turkey, which was actively supporting the Syrian opposition against the Assad regime, felt it did not have adequate defense against Syrian missiles, especially those that might have been fitted with chemical warheads. Turkey went to NATO with its concerns, which were amplified by intense Syrian missile attacks against opposition forces in the country’s north.

In response to Turkey’s request, NATO in January 2013 launched the Active Fence mission for Turkey’s air and ballistic missile defense, under the coordination of Supreme Allied Commander Europe. As part of the mission, the United States sent two Patriot batteries to Gaziantep in southeast Turkey, Germany sent two batteries to Kahramanmaras, and Holland sent batteries to Adana. Holland withdrew its batteries in January 2015 and handed them over to Spain. These systems have never been used, as there had been no direct air threat from Syria.

Are the United States and Germany justified in withdrawing their Patriot systems based on technical reasons and a lowered threat of air and missile strikes from Syria? German and US media have been saying that, in addition to these stated reasons, there are also political considerations. Obviously, it's not realistic to claim otherwise at a time when the United States and Turkey have increased their cooperation over the use of Incirlik Air Base to combat IS; Turkey was debating whether to remain in the Western defense alliance; tensions rose in Turkish-German relations; IS threats to Turkey escalated; and clashes resumed between Turkey and the Kurdistan Workers Party (PKK).

Germany's daily newspaper Frankfurter Rundschau, in an article that began “Deployment and withdrawal of the Patriots were political messages,” said, “From the outset it was debatable whether Turkey would be targeted by missiles from Syria. NATO nevertheless dispatched the German missile defense system.” The story added that the deployment was essential to keep Turkey content and prevent it from further destabilizing the region. Frankfurter Rundschau allowed that the presence of Patriot missiles could have reduced the already-minimal possibility of a Syrian threat, but concluded, "Politically. the mission did not serve anything. The Turkish government is more concerned with its own interests, not with those of the alliance.”

According to major German newspaper Frankfurter Allgemeine Zeitung, the real reason for the withdrawal of the Patriots is Turkey’s divergence from Germany and the United States on Syria. German media also have cited Turkey’s air attacks against the PKK in northern Iraq, and Ankara’s unwillingness to become actively involved in combating IS.

In the United States, an Aug. 15 article in The New York Times had a major impact in Turkey. The story cited some information not contained in official statements. Quoting unidentified US sources, the article said the decision to withdraw missiles was made months ago, but to have informed Turkey at the time could have imperiled negotiations in progress with Turkey, notably over the use of Incirlik Air Base. American officials, deeply worried about such a probability, delayed informing Turkey until an agreement on the use of Incirlik was reached July 22. When the Patriots decision was finally announced, Turkey was livid, the story said.

These are the impressions Al-Monitor has gathered after contacts with Turkish Foreign Ministry officials, US officials and security circles:

In short, the US and German decisions to withdraw their Patriot batteries from Turkey sent Ankara two clear political messages: From now on, the priority threat in Syria is IS, and be ready to get involved in combating IS, including cooperating with the Assad regime.

Washington, by publicizing its decision to withdraw its Patriots in a joint statement with the Turkish Foreign Ministry, wanted to soften the disappointment of Turkish decision-makers. The question now is: Has Turkey received these messages?