Semih Idiz analyzes the various rationales for NATO’s deployment of Patriot missiles to Turkey and their possible consequences. 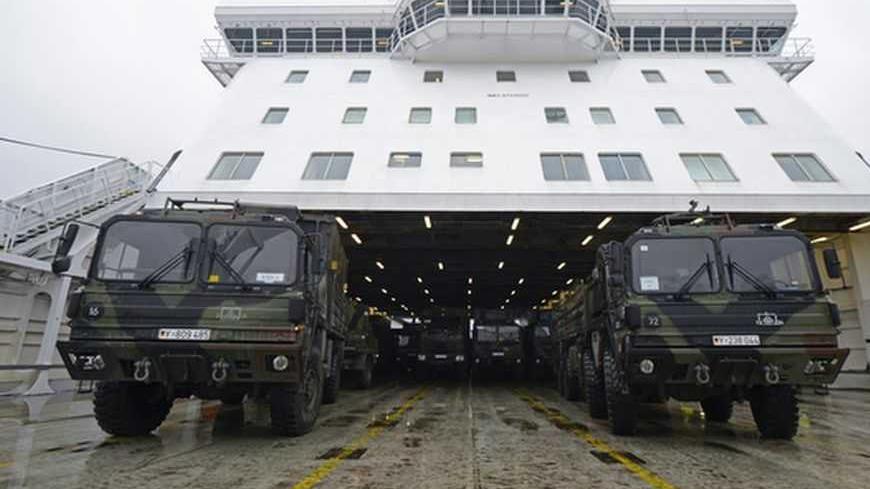 Military vehicles of a Patriot missile system are loaded on a ship in the harbour of Travemuende, Jan. 8, 2013. - REUTERS/Fabian Bimmer

German and Dutch Patriot missiles have arrived in Turkey as part of a NATO mission to bolster Turkish air defenses against a possible missile attack from Syria. This follows the arrival of US Patriot missiles in January, and the integrated deployment under NATO’s command is expected to be up and running by early February.

The fear in Ankara has been that the Syrian regime may arm its long-range Russian-made Scud missiles with chemical warheads and set them on Turkey in a final, desperate act. Turkish President Abdullah Gul was the first to warn against this possibility in an interview with the Financial Times in November.

Syrian President Bashar al-Assad has said he would never use chemical weapons against his people, but has not discounted their use against foreign invaders, thus indirectly confirming that Damascus has these weapons.

The fact that the Syrian regime started using missiles against opposition forces, however, added to Western concerns and expedited NATO’s decision in December to grant Ankara’s request for Patriot missiles. Turkey had placed that request in November after ordinance fired either mistakenly or intentionally from across the Syrian border killed a number of Turkish citizens.

This, however, will not be the first such deployment in Turkey. Patriots were also sent there during the wars against Saddam Hussein in 1991 and 2003. The latest decision to deploy these missiles in Turkey has, however, created more of a regional stir than before.

Russia and Iran, who have been staunch supporters of the Assad regime, reacted angrily to NATO’s decision. Both see it as part of a wider plan by the US-lead alliance to neutralize Russian and Iranian missile capabilities. Both countries also consider the Patriot deployment within the context of Ankara’s decision in 2011 to allow the stationing of the NATO’s early-warning anti-missile radar system in the town of Kurecik, in Southeastern Turkey.

Prime Minister Recep Tayyip Erdogan and Foreign Minister Ahmet Davutoglu have argued consistently that this radar is not aimed at a specific country, underlining that NATO documents pertaining to it do not mention any country as a threat. US and NATO officials have, nevertheless, told the Western media that the principal aim of the radar is to monitor Iran’s missile activities.

Tehran sees it that way, too, with Iranian officials arguing also that a main objective of the radar is to protect Israel from Iran. They see the decision to deploy Patriot missiles in Turkey in the same light. Iranian military officials have said that they are prepared to respond effectively to any threat from this radar and the Patriot batteries in Turkey.

The head of the country’s armed forces, General Hassan Firouzabadi, on the other hand, warned Turkey in December against the deployment of the Patriots, going so far as to claim that this could trigger a “world war.”

Russia, for its part, has opposed NATO’s early-warning radar project, popularly dubbed the “missile-defense shield,” from the start, when it was still being debated where key components of the system should be stationed. Moscow has also said it would counter this system with similar systems of its own.

Russia has also opposed the deployment of Patriots in Turkey. While acknowledging Turkey’s right to self defense, Foreign Minister Sergei Lavrov nevertheless warned NATO Secretary-General Anders Fogh Rasmussen in November that “any buildup of weapons creates threats and risks. Any provocation can cause a very serious armed conflict.”

President Putin echoed this concern during a visit to Turkey in December and, citing Russian playwright Anton Chekhov, said that if there is a gun hanging on the wall in the first act, it is likely to be fired before the play is over. Moscow also believes that the main mission of the Patriots is to protect the radar facility in Kurecik, and like Tehran, has argued that these missiles are in Turkey for the long haul.

Turkish and NATO officials deny this, saying the Patriots are here on a defensive mission, and will go when it ends. In response to media claims, these officials also reiterate that the Patriots will not be used to enforce a no-fly zone over Syria. Meanwhile, Western diplomats point out that the German parliament’s authorization to send the Patriots to Turkey is valid for one year only.

Together with the US batteries, which arrived at the Incirlik Airbase, near the city of Adana in early January, the total number to be deployed in Turkey will be six. The US Patriots will be stationed in Gaziantep, while the German ones will be deployed in Kahramanmaras, and the Dutch in Adana. All three are major cities near the Syrian border.

Not surprisingly, the arrival of the Patriots was also met by the usual groups of angry anti-NATO protesters in Turkey, who clashed with police outside the Incirlik airbase and in various Turkish cities. But these protests could not prevent the deployments.

Prime Minster Erdogan is on record as saying that the border with Syria is also NATO’s border, underlining that Turkey has the right to ask for these missiles from an alliance of which it has been a member for over 50 years. Although his ruling Justice and Development Party’s grass-roots supporters are traditionally anti-NATO, Erdogan’s remarks have tempered their anger, given his continuing popularity, even if they are not happy with the turn of events.

The Patriots have also provided political fodder for the main opposition Republican Peoples Party and the Nationalist Movement Party. Both have been trying to score points against the government by arguing that while Germany and Holland sought parliamentary approval for this deployment, this did not happen in Turkey. They have therefore been insinuating that there is more to the matter than the public is being told.

There are analysts, on the other hand, who claim that the deployment of the Patriots is a purely symbolic act. One of these is Michael Brtoska, the scientific director of the Institute for Peace Research and Security Policy at the University of Hamburg. Talking to Deutsche Welle, Brtoska was skeptical that six Patriot missiles would be sufficient to protect the 900 km (560 mile) border with Syria.

As an aside here, it must be mentioned that Turkey wanted more than the six batteries it got, but NATO could not meet its request for up to 20 batteries, pointing to a availability.

Arguing that he sees no reason for the Syrian regime to attack Turkey, Brtoska tried to assuage pubic concerns in his country that German soldiers manning the Patriot batteries might be in harm's way. "Chances are very high that the soldiers are looking at a quiet time there," he noted.

Others, however, point to the fact that this is the Middle East, where anything can happen, and caution against such categorical remarks. They also dispute the claim that the Patriots are in Turkey for symbolic reasons.

Pointing out that the estimated cost of the deployment of the Patriot missiles will be €42 million for Holland and €25 million for Germany, a NATO official told Al-Monitor that “it would by a very expensive way of making a point” if it is true that this is only a symbolic act.

Semih İdiz is a contributing writer for Al-Monitor’s Turkey Pulse. A journalist who has been covering diplomacy and foreign-policy issues for major Turkish newspapers for 30 years, his opinion pieces can be followed in the English-language Hurriyet Daily News and Taraf.