Kadri Gursel writes that Turkey's request for NATO Patriot missiles reveals its lack of capacity and few other options to handle regional threats. 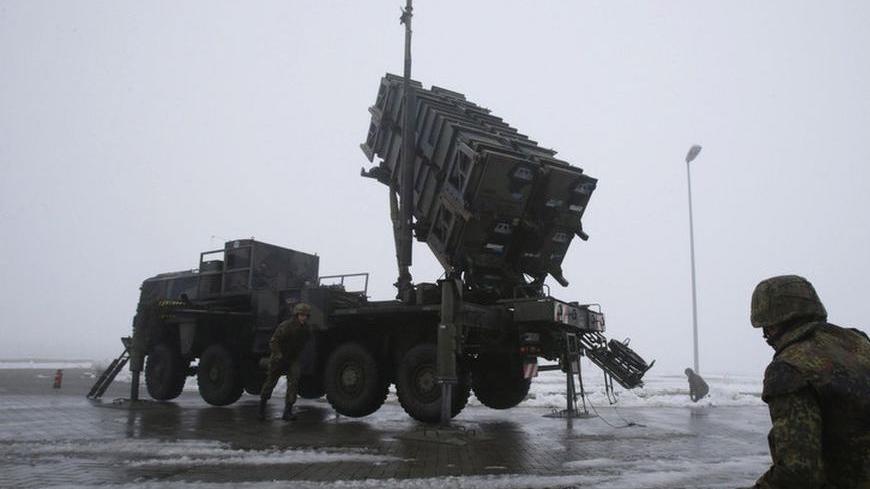 Soldiers of the German armed forces Bundeswehr beside a PAC-2 launcher of a Patriot missile battery in the north German village of Warbelow, Dec. 18, 2012. Germany's lower house of parliament, the Bundestag, approved the sending of two Patriot batteries and 400 soldiers to Turkey as part of a NATO plan to protect the country from expansion of the Syrian conflict.
December 28, 2012

Turkey, perceiving ballistic missile threat from Syria, called on NATO to deploy Patriot missile batteries on Turkish soil against this threat. NATO approved the Turkish request and decided to deploy six batteries, two each from the US, Germany and Netherlands, in Turkey close to the Syrian border.

After joint assessments made with the Turkish government, it was agreed to deploy the US Patriots at Gaziantep, the German batteries at Kahramanmaras and the Dutch ones at Adana. According to press reports, the Patriots will be operational in January. Adana, Turkey’s fourth largest city, is 100 kilometers (62 miles) from the Syria border, where the important US-Turkish airbase at Incirlik is located. Gaziantep, an important industrial center with 1.5 million population is 60 km (37 miles) to the Syrian border. Kahramanmaras, the provincial capital with a population of half a million, is 150 km (93 miles) north of the border.

The data also shows that the Patriot batteries will not be defending the NATO anti-ballistic missile defense system set up in rural Malatya.

But the purpose of this article is not to set out what Patriot deployments doesn’t mean but what they actually mean. That is more interesting.

Patriots reveal Turkey’s military capacity deficiency to back up its ambitious foreign policy.

Simple but true:  In the summer of 2011, Turkey decided to bring down the Baath regime in Damascus and sought ways to implement its decision as much as its capacity allowed.. Turkey did everything it could with the exception of direct military intervention in Syria. It is not a secret that Turkey sponsored the initial organization and coordination of the Syrian opposition, opened its territory to the use of the opposition military forces and provided logistical support to them.

The roles Turkey played in arming of the opposition forces are now a secret known by all. Ankara, despite the objections of its Western allies, promoted creation of buffer zones in Syria and even direct intervention. To this end, although at the end they did not succeed, Turkey devised and applied aggressive policies.

Some western capitals were worried that Turkey’s disproportionate response to killing of its five citizens at Akcakale by Syrian artillery fire could have ignited an unwanted war.

In the final analysis, Turkey became a country that for the first time in its history openly strived to terminate a regime in a neighboring country and treated that regime as an enemy. Of course, nothing could be more  natural for the Baath regime to feel the same enmity against Turkey.

It was known from the outset that Syria had chemical weapons of mass destruction and ballistic missiles that could deliver them to distant targets. Turkey, on the other hand, does not have the capability of intercepting these missiles in flight and destroying them.

This in itself is a clear indication that Turkey’s current military capacity is not enough to support an aggressive and ambitious Syria policy.

Can the Baath regime in Syria fire their Scuds at Turkey with or without chemical warheads? When the collapse of the regime becomes inevitable, could they press the buttons for Scuds to punish Turkey, to drag Turkey into the crisis or to destabilize the entire region?

These questions don’t really mean much. What is important is that a hostile regime perceiving a vital threat from Turkey has deadly weapons that Turkey could not confront without the help of its Western allies.

Turkey and its Western allies, no matter how divergent their ideologies and strategies may be, agreed on the need to terminate the Syrian regime. But Turkey went too far ahead of its allies and then slowed down and asked for their assistance when it perceived the threats.

Since Turkey had to approve NATO’s “New Strategic Concept” adopted at November 2010 Lisbon summit, it must now enter into a realignment with the Western alliance. Turkey, which had anyway agreed to deployment of a NATO ballistic missile defense system on its soil by agreeing to the New Strategic Concept, also had to bid farewell to its policy of zero problems with Iran.

We should not forget this Turkey had defied the West only a few months before November 2010 and puts its name to the Tehran Declaration along with Brazil and Iran, and caused raised eyebrows in Western capitals by rejecting the UN Security Council’s fortified sanctions against Iran’s nuclear program.

In short, this realignment is unstable because it is not caused by ideological or strategic standpoints but  by lack of capacity and not having another option.

When you look at it from a NATO perspective, the Western alliance proved once again that it is a robust alliance by adhering to principles of cooperative security and indivisibility of security by closing the security gap of one of its members.

Kadri Gürsel is a contributing writer for Al-Monitor's Turkey Pulse, and has written a column for the Turkish daily Milliyet since 2007. He focuses primarily on Turkish foreign policy, international affairs and Turkey’s Kurdish question, as well as Turkey’s evolving political Islam. He joined the Milliyet publishing group in 1997 as vice editor-in-chief of a newly launched weekly news magazine, Artı-Haber, and was Milliyet’s foreign news editor from 1999 until 2008. Gürsel was also a correspondent for Agence France-Presse between 1993 and 1997, and in 1995 was kidnapped by the PKK, an experience he recounted in his book "Dağdakiler" ("Those of the Mountains"), published in 1996. He is also chairman of the Turkish National Committee of the International Press Institute.