Kadri Gursel writes that Iran's fury at NATO's deployment of Patriot missiles to Turkey is also related to Anakara and Tehran's competing interests in Syria. 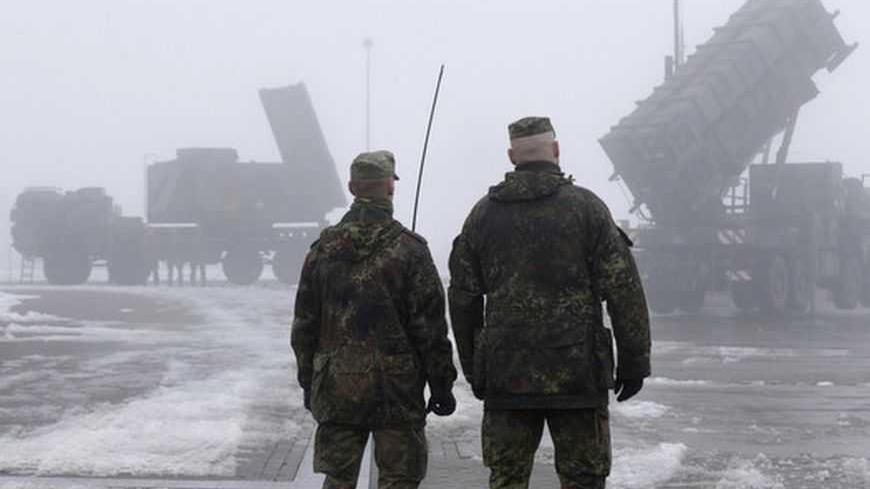 Soldiers of the German armed forces stand next to a radar unit (L) and launcher of a Patriot missile battery during a press rehearsal in the north German village of Warbelow December 18, 2012. - REUTERS/Tobias Schwarz
January 1, 2013

Iran was outraged by NATO’s decision to deploy six Patriot batteries at Turkey’s request — two each from the US, Germany and the Netherlands — in Turkey.

On Dec. 15, Iranian Chief of Staff General Hassan Firouzabadi said, “Each one of these Patriots is a black mark on the world map, and is meant to cause a world war. They are making plans for a world war and this is very dangerous for the future of humanity and for the future of Europe itself.”

This was truly an out-of-line, neurotic reaction that reflected a messianic mindset. Then, Iranian President Mahmoud Ahmedinejad canceled his scheduled visit to Turkey. The Turkish press said Ahmedinejad had to cancel his visit as a reaction to the Patriots.

Then, Iranian Foreign Minister Ali Akbar Salehi chimed in: “The deployment of Patriot missiles will achieve nothing but provocation and, God forbid, result in others being forced into uncalculated actions. Their deloyment is more of a provocation than a deterrent, and they won’t help regional security.”

These were all implied threats.

This tense attitude of Iran's could be hard to understand at first glance. Really, what is it with Iran? Militarily speaking, deployment of the Patriots will not expedite the downfall of the Syrian Baath, Iran’s strategic ally. The batteries which will become operational two each at Adana, Kahramanmaras and Gaziantep won’t enforce a no-fly zone. It is true that at one point Turkey lobbied for a no-fly zone to hasten the end of the Damascus regime. If that had been the goal — and it wasn’t — to try to accompligh that with the Patriots would have been irrational. Anyway, it would have been unfeasible as the range of the missiles is not long enough to enforce such a zone in Syrian airspace.

It is also impossible to use these missiles offensively against Syria. Therefore, Iran’s anger isn't just about the weapons. The arrival of the Patriots in Turkey means more than that for Iran. We can analyze it in four parts in the context of the Arab uprisings and revolutions:

First, the Islamic Revolution of Iran is losing influence and prestige in the region. Arab uprisings have brought Islamic movements to power in the Maghreb, but none of the slogans and strictures of the Islamic Revolution of Iran were heard in the streets or in the media. In the past, Iran’s revolution had a degree of influence of some Sunni Islamic movements. But today we don’t notice Iranian influence on Islamic or secular political and civic actors of the Arab uprisings. It is therefore perfectly possible that Arab uprisings actually led to the regression of Iranian ideology.

Second. Iran is at the threshold of a major strategic loss. Following the toppling of the Arab dictators of the Maghreb, Iran’s strategic ally in Syria is next on line. In Iran’s geopolitics, Syria has a vital standing. The fall of Damascus would be an irreplaceable loss for Iran.

The third factor that enrages Iran is the increase in Western military power in Turkey, and therefore in the region. Even before the Egyptian uprising, many were predicting the departure of Mubarak, the US’ most valuable ally in the region, for health reasons. Tehran was hoping the inevitable outcome of his withdrawal from the scene would have been a significant reduction of US presence in the region. But things didn’t turn out as Iran had hoped. In toppling of Qaddafi in Libya, the Western Alliance played the lead role. Now they are also playing an important role in efforts to get rid of Iran’s strategic ally, the Baath regime.

The deployment of NATO Patriots in Iran’s neighbor, Turkey, was a symbolic but spectacular expression of how Western powers were maintaining their military presence in the region even in the environment of Arab uprisings.

And finally, as the fourth factor, we have to acknowledge that Turkey’s Syria policy is by itself a major source of Iranian fury.

When in the summer of 2011, Turkey decided to blow up all bridges to Syria and overthrow its regime, one factor overlooked was Syria’s vital importance for Iran. For Tehran, Turkey’s anti-Syrian position was a strategic threat to Iran. Here we are talking of a Turkey that had pursued a policy of “zero problems with Iran” until Ankara tacitly agreed at NATO’s November 2010 summit to the deployment of the defense-system radar on its soil. Only a few months earlier Turkey had signed the Tehran Declaration with Brazil and Iran, and voted against the fortified Security Council sanctions on Iran.

While Iran was elated by Turkey’s toning down of its relations with the Western Alliance, its subsequent realignment caused resentment in Tehran.

Tehran was already having problems living with Turkey’s Syrian policy. Its anger became fury when this policy ended up with the deployment of the Patriots.