Semih Idiz explains the breakdown in Turkey-Iran relations over Syria. 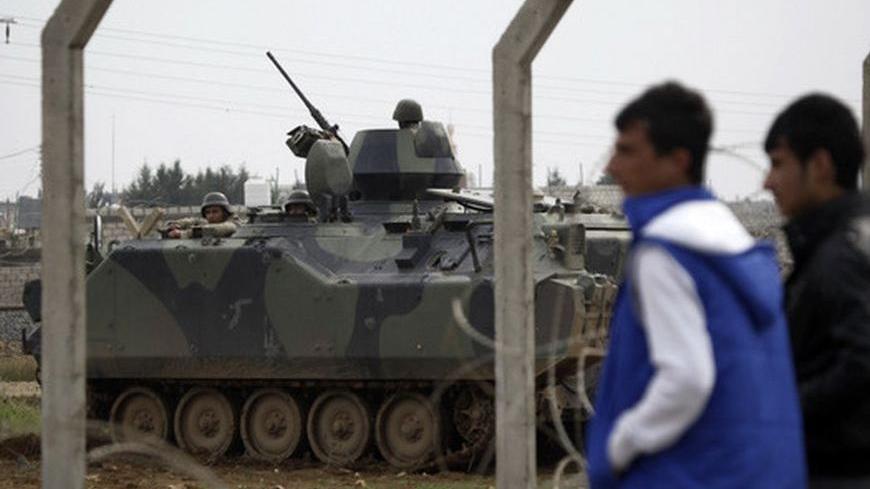 A Syrian youth from the northern Syrian town of Ras al-Ain reacts in front of the border fence near Turkish soldiers in a military vehicle at the Turkish border town of Ceylanpinar, Nov. 25, 2012. Iran said Turkey's plans to deploy Patriot defensive missiles near its border with Syria would add to the region's problems, as fears grow of the Syrian civil war spilling across frontiers. - REUTERS/Amr Abdallah Dalsh

The Syrian crisis has made it more difficult for Turkey and Iran to continue giving the impression of normality in their ties, something they have tried hard to do in the past despite disagreements on specific issues. With Ankara firmly behind the Syrian opposition, and Tehran continuing its political and military support for the regime of President Bashar al Assad, serious cracks have started to emerge in relations between the two countries.

Meanwhile Turkey’s decision to call on NATO for Patriot missiles against the possibility of a missile attack from Syria has upped the ante considerably for Tehran, leading to less than diplomatic exchanges between the two capitals. The latest spate of verbal sparring came after Iranian Army Chief of Staff General Hassan Firouzabadi warned Turkey against the deployment of Patriot missiles, expected to take place in late January or early February.

Not mincing his words Gen. Firouzabadi even suggested this could be a prelude to world war. He claimed on Iranian state television (Dec. 15) that the true aim in deploying the missiles in Turkey was to protect Israel against Iran and to restrict Moscow’s capacity to help the Syrian regime.

“Unfortunately, one by one, Western countries are approving the deployment of Patriot missiles to Turkey’s border with Syria while they are planning a world war, which is very dangerous for the future of humanity and Europe itself,” Firouzabadi declared.

In fact these are not the first remarks by Iran’s top military commander targeting Turkey over the Syrian crisis. “It is not a proper norm for Syria’s neighboring states to facilitate America’s warmongering objectives. If, they accept such a norm, they must then realize that after Syria, Turkey and other [such] states will be next in line,” he was quoted by the Iranian Press TV channel as saying in August.

There were also angry remarks from Iranian military officials and politicians when Turkey agreed in September 2011 to host the early warning radar for NATO’s missile defense system. That system is clearly aimed at countering ballistic missile threats from Iran, even if Ankara has been trying to mollify Tehran by arguing that it is not specifically aimed at Iran, but at unspecified general threats.

Prime Minister Tayyip Erdogan and Foreign Minister Ahmet Davutoglu have also been trying to assuage Iranian concerns by underlining that the Patriot missiles are coming in for a defensive, not an offensive, mission to do with Syria, and will depart once that mission is completed. But to little avail it seems, judging by the latest remarks emanating from Iran.

Davutoglu has of course brought up the matter of the less then friendly sounding statements from the Iranian military towards Turkey, in his meetings with his Iranian opposite number Ali Akbar Salehi in the past.  Based on official Turkish accounts, Davutoglu was assured by Salehi that only remarks emanating from him should be taken as reflecting the true Iranian position concerning Turkey, which — the Iranian foreign minister reportedly declared — continued to be positive.

That however was then, and Salehi has now joined the chorus in Tehran — almost simultaneously with Gen. Firouzabadi’s remarks — by referring to the deployment of the Patriots in Turkey, as a “provocation” that will be to the detriment of regional security. In a thinly veiled warning to Turkey, Salehi also reiterated his country’s support for President Assad.

“The Islamic Republic of Iran won't allow Western plans and scenarios aimed at overthrowing the Syrian government to succeed,” he said in a comment posted on the website for Iranian state TV.

Firouzabadi’s and Salehi’s remarks were in turn followed by the clearest indication of tension in Turkish-Iranian ties when Iranian President Mahmoud Ahmedinejad dropped his upcoming visit to Turkey. That was planned for Dec. 17, when he was due to attend a ceremony commemorating the 739th anniversary of the death of Jalal-u-din Rumi, the 13th century Sufi mystic revered by Turks and Iranians alike.

The Iranian side tried to explain away the cancelation on the basis of “programming difficulties,” but it was clear that Ankara was displeased over this development, with Prime Minister Erdogan commenting icily that, “Turkey had done the right thing by inviting the Iranian President,” and suggesting the rest was up to Tehran.

Erdogan also added that Ankara had not received any indications that the cancelation was due to the Patriot deployment. That contention however was taken with a pinch of salt by diplomats in Ankara who believe that Ahmedinejad’s decision was very much linked to the issue of the Patriot missiles, and Ankara’s unwavering support for the Sunni-led Syrian opposition.

As matters stand, two relatively recent meetings between Erdogan and Ahmedinejad, the first in October in Baku, on the sidelines of the Economic Cooperation Organization (ECO) summit, and the second on the sidelines of the Democracy Forum in Bali in early November, produced little agreement on Syria resulting merely in diplomatic niceties expressed about continuing to work together for a settlement to the crisis.

All of this leaves the two countries quite far from the pre-Arab Spring days when their ties were developing rapidly, in spite of Washington’s disapproving looks, a fact that culminated in the fuel-swap deal worked out by Turkey and Brazil in May 2010 for Iran’s enriched uranium stocks. That deal was rejected by the US but appeared to cement Turkish-Iranian ties further.

But then the Arab world imploded, unexpectedly resulting in the Syrian crisis. The two countries are now not only at loggerheads over Syria, but are also seen to be basing their regional calculations on sectarian affiliations, which have taken on a new significance due to the civil war in Syria.

Meanwhile Turkey has found it hard to withstand pressure from Washington and has reduced its gas and oil purchases from Iran, while seeking alternative ways to pay Tehran for what it is still purchasing — which is still a significant. The volume of trade between the two countries has nevertheless dropped by 25% this year, after reaching $3.5 billion in 2011.

It remains to be seen if the remaining volume of trade will act as a buffer against a serious crisis in bilateral ties. It did so in the past, but those were times when momentous events of vital strategic importance for the two countries were not taking place in the Middle East.