Ankara and Tehran ties are strained over Syria and Hezbollah. 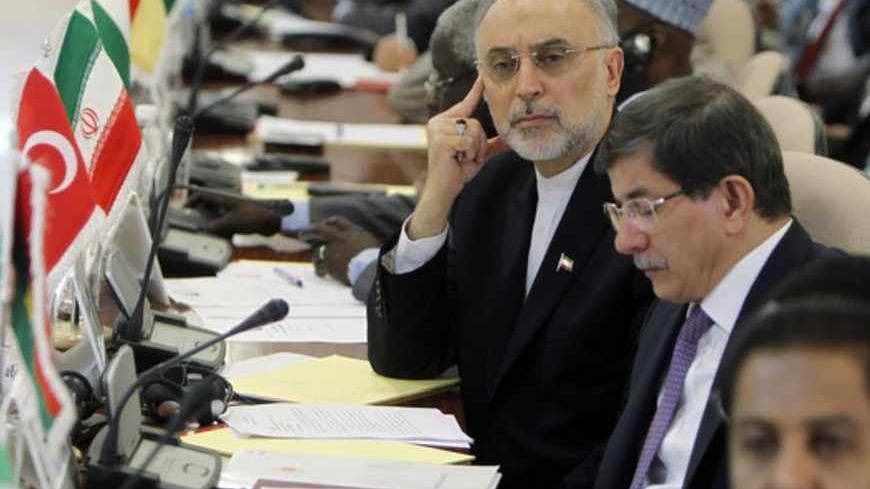 The pretense of good ties Ankara and Tehran have been trying to maintain despite the deepening of the Syrian crisis — in which the two countries are supporting opposite sides — has started to shatter. Iran is also expressing dissatisfaction over Turkey’s peace process with the Kurdistan Workers Party (PKK), which involves militants from the group moving out of Turkey into northern Iraq. While Turkey’s ties with Tehran become more confrontational, Ankara’s new regional enemy is turning out to be the Iranian-backed Lebanese Hezbollah.

Talking to the state-run Turkish TRT channel on May 12, Turkish Foreign Minister Davutoglu accused Iran of providing space for “the killer,” Syrian President Bashar al-Assad, to act. He went on to declare that he had cautioned his Iran counterpart, Ali Akbar Salehi, over the telephone recently that Tehran should opt for a deterrent approach toward Assad.

Davutoglu was also one of the keenest supporters of the Joint Statement issued after the meeting in Amman of the core members of the “Friends of Syria” group on May 22, which called for an immediate withdrawal by Hezbollah as well as “fighters from Iran” from Syrian territory.

Lashing out at Davutoglu for “raising unfounded allegations” against his country, Iranian Parliament Speaker Ali Larijani was quoted by the Fars News Agency as saying during a parliamentary address that “Turkey was projecting the blame for its miscalculations in Syria on Tehran and Hezbollah.”

In an earlier sign of rising tension between Ankara and Tehran, Iranian Foreign Ministry spokesman Seyed Abbas Araqchi reflected dissatisfaction over the recent deal worked out between Ankara and the PKK that requires that the group move its militants out of Turkey to their bases in northern Iraq.

“When some developments are to take place at borders and forces are to be moved, they definitely need to happen with the consent of the central governments [of Iran and Iraq],” Araqchi was quoted saying by Fars on May 21. Urging respect for Iraq’s territorial integrity, Araqchi added that Iran was monitoring developments in the region closely.

Senior Iranian military officials and politicians have reacted angrily to Turkish support for the Syrian opposition, especially after Ankara called on NATO to deploy anti-ballistic Patriot missiles near the Syrian border. Tehran is also angry over Ankara’s allowing NATO to deploy sophisticated anti-missile radar aimed at Iran on Turkish territory.

In an attempt to defuse tension over anti-Turkish remarks from Iran and the angry Turkish responses, Davutoglu and Salehi had arrived at an understanding whereby only those statements reflecting the Iranian government’s official position on Turkish-Iranian ties should be taken seriously, while all others are to be taken as “personal opinions.”

Diplomats in Ankara, however, saw this as a thinly veiled attempt to check the rising tension between the two countries, tension that is being increasingly reflected in official statements. Meanwhile, accusations and angry remarks from Turkish officials aimed at the Iranian-backed Lebanese Hezbollah are expected to fuel these tensions further.

Key members of Turkey's ruling Justice and Development Party (AKP) have adopted an openly hostile stance against Hezbollah after the group’s leader Hassan Nasrallah vowed recently to support Assad to the bitter end and admitted that Hezbollah fighters are involved in the bloody battle between regime and opposition forces for the strategic Syrian city of Qusair.

Ankara has also made the massacres by regime forces earlier this month in the towns of Baniyas and Al Bayda on Syria’s Mediterranean coast a rallying call against Assad and his regime, and is openly accusing Hezbollah of participating in the brutal attempt to ethnically cleanse the region of Sunnis.

Talking at the sixth International Risale-i Nur and Islamic Unity Symposium in Ankara on May 26, Deputy Prime Minister Bekir Bozdag blasted Hezbollah, whose name means “The Party of God,” saying it should change its name to “Hezbollsatan,” The "Party of Satan."

“You call yourself ‘Hezbollah’ and then you declare jihad to kill innocent women, children and the aged. How can there be such stupidity?” Bozdag was quoted by the media saying angrily to widespread applause from the predominantly Sunni audience.

Meanwhile, the sentiments expressed by Bozdag, who is one of the AKP’s leading Islamist ideologues, are finding an echo on the streets, as demonstrated by the angry anti-Iranian and anti-Hezbollah demonstrations outside Istanbul’s Fatih Mosque following Friday prayers last week on May 24. These demonstrations, which are expected to continue, are a telling sign of how the times have changed, since Fatih Mosque is generally the venue for anti-Israeli and anti-American flag-burning demonstrators chanting Islamic slogans.

The angry reaction to Bozdag’s “Hezbollsatan” remark by Turkey’s Alevis, however, also went to show how Turks are increasingly divided over the sectarian war in Syria.

“This is how they are; they call it ‘the party of Allah’ when they receive help from [Hezbollah]. But when [Hezbollah] sides with the Alevis, they turn it into the ‘Party of Satan,’" Huseyin Aygun, a deputy from the main opposition Republican Peoples Party (CHP), himself an Alevi, tweeted in response to Bozdag’s remarks.

Bozdag has other critics as well, even among those who once were considered to be in the Islamist camp. One such critic is Ahmet Hakan, a widely read columnist for Hurriyet. Hakan, a Sunni, pointed out in his column May 28 that Hezbollah was until recently hailed by many in Turkey for its “legendary resistance to Israel.”

Also pointing to the assistance Assad is receiving from Moscow, Hakan went on to write, “[Mr. Bozdag], who does not consider calling [Russian President Vladimir] Putin ‘Satan,’ is not reluctant to refer to Hezbollah as ‘Satan,’” and accused Bozdag of “not expending a millimeter's worth of effort to understand Hezbollah’s problem.”

Meanwhile, the recent Reyhanli massacre, which the Turkish government under the administration of Prime Minister Recep Tayyip Erdogan says was perpetrated by pro-Assad elements in Turkey, has an increasing number of Turks questioning why Ankara has gotten embroiled in the Syrian crisis in this way. Bozdag’s remarks, on the other hand, have left many wondering why the Erdogan government is now actively creating new enemies in a region where Ankara has always treaded cautiously in the past by remaining impartial, given the potential for crises there to spill over into Turkey.

It seems the Erdogan government, which once set out to have good ties with everyone in the region, is going to come under increased public scrutiny in Turkey over the way it has been handling the Syrian crisis and its fallout.