Turkey once sought a nuclear-free region but now covets the protection from its neighbors that is afforded by US nuclear bombs, writes Kadri Gursel. 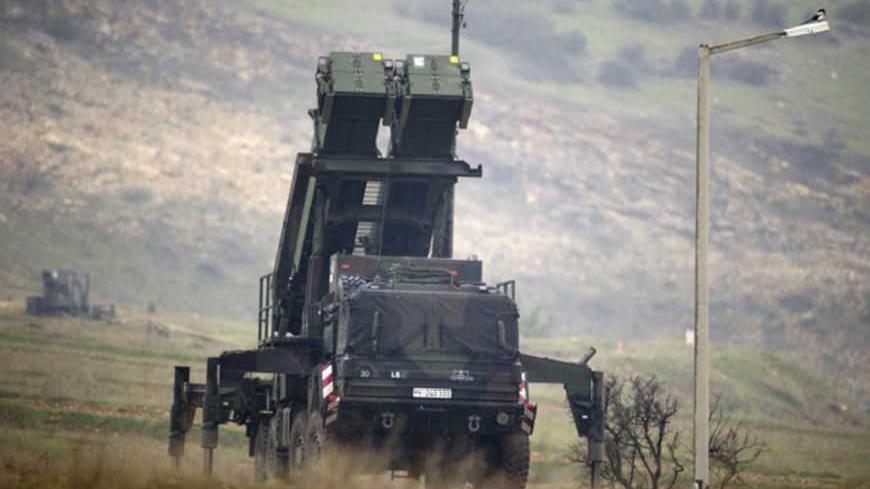 In recent years when the AKP government gave priority to developing strategic ties with the Baath regime, the neo-Islamic political class that rules Turkey did not think of chemical weapons and ballistic missiles in the Syrian army inventory as a strategic threat against Turkey.

They thought at the time that Turkey, by using its soft power, was actually transforming Syria and even on the verge of integrating it. Visas were abolished between the two countries and contacts reached unheard of levels.

For example on Dec. 22-23, 2009, in “The First Session of the Turkey-Syria High Level Strategic Cooperation Council” held in Damascus, 50 accords, memorandums of understanding and cooperation protocols were signed by two countries on education, culture, commerce, security, health, irrigation, agriculture, mass housing and other fields.

We are talking of the not too distant past, when many were gushing with praise for Foreign Minister Ahmet Davutoglu’s patented political strategy of “Zero Problems With Neighbors.”

The joint communique of the meeting had a paragraph that revealed an interesting paradox:

“The parties, agreeing on the necessity of purging the Middle East from nuclear weapons, have reviewed latest developments on the ongoing dialogue in the context of Iran’s nuclear program. With the conviction that all countries have the right to use nuclear energy for peaceful purposes we have emphasized the importance of finding a diplomatic solution to this question.”

The paradox that called for clarification was NATO-member Turkey, jointly with anti-West Syria, declaring its wish for “a Middle East purged of nuclear weapons."

“Nuclear weapon-free Middle East” was one of the themes of the anti-Israel policy that peaked between the Davos confrontation of January 2009 and the Mavi Marmara events of May 2010. Basically, there was nothing strange with that expressed wish. Everyone, at least a vast majority, would want to see the Middle East cleansed of nuclear weapons. But when it is Turkey that asks for it, one has to pause and think. Turkey is one of two countries in the Middle East that has nuclear weapons on its soil. That Israel is a nuclear power is a secret known to all in the world. That Turkey has American B61 nuclear bombs on its territory is also known by all, but disregarded.

The difference between Turkey and Israel is that the nuclear bombs deployed at Incirlik base near the southern city of Adana are not Turkish but American property. These are air-launched gravity bombs and their quantity changes “according to need.” B61s  are the forward deployed elements of the nuclear umbrella the US provides for its NATO allies.

B61s were deployed at Incirlik during the Cold War years to balance Soviet tactical nuclear weapons and they are still there. According to reliable sources, Turkish pilots are not trained on B61s and Turkish F-16s don’t have the capability of delivering B61s.

In addition to Turkey, these bombs are deployed in territories of four other US allies: Belgium, Holland, Germany and Italy. All, except Italy, now don’t want these weapons on their soil.

But there is no likelihood for Turkey to adopt such a position. To the contrary, actually.

The B61s that are still offsetting the Russian tactical nuclear weapons, as they were in the past, now have an increasingly important role for Turkey in the new Middle East geopolitics: To deter Syria and Iran. The Syrian situation is well known. Since the uprising and the civil war than ensued in Syria, Turkey, which until recently tried to transform that country with its soft power and strategic cooperation, is now resorting to all possible means, except to openly declaring war, to topple the regime in Damascus and replace it with a Muslim Brotherhood-dominated fraternal regime. Turkey, aware that its approach is seen as hostile, is now wary of Syria’s chemical weapons and ballistic missiles. Against this threat, Ankara asked for NATO protection and the Western alliance deployed Patriot batteries around three cities close to Syria.

On the other hand, despite all objections, Iran is making headway in becoming a new nuclear-armed power of the Middle East. No doubt a nuclear-armed Iran will constitute a strategic imbalance for Turkey in the Middle East geopolitics. For a long time, as a political choice prompted by the “zero problems” policy, Turkey ignored this threat. The engine of Ankara’s “zero problems” approach to Iran was to advocate a solution to the international crisis brewing around the Iranian nuclear program that would ensure a change of the global nuclear order, to the benefit of developing powers like Turkey.

Three years ago on May 14, 2010, the declaration that Turkey, at that time challenging the global nuclear order, pronounced to the world from Tehran (along with Brazil and Iran) was a part of this strategy. Acting with the same philosophy, on June 9, 2010, Turkey voted against a UN Security Council resolution that called for aggravated sanctions against Iran’s suspicious nuclear program.

Three years after the Tehran Declaration and the negative vote at the Security Council, Turkey, far from challenging the global order, is feeling more secure under the protective wings of precisely that order against a threat from Iran.

It was Turkey’s Syria policy that led to this situation.

On March 19, in a workshop on "Emerging Powers and the Global Nuclear Order” organized jointly by Washington-based Carnegie Endowment for International Peace [CEIP] and the University of Brasilia at Brazil’s capital, Brasilia, this subject too was discussed. Turkey-based nuclear weapons were debated in the context of AKP’s ambitious Middle East policy.

Sinan Ulgen, the Director of Istanbul-based Economy and Foreign Policy Research Center [EDAM], who submitted a paper to the workshop, said:

“Ankara, (…) believes that the continued presence of NATO nuclear weapons deters chemically armed Syria and, potentially, a nuclear-armed Iran in the future."

Turkish officials continue their quiet support for nuclear weapons. While reluctant to discuss these weapons in public, Ankara’s actions suggest that Turkey is taking steps to ensure that it retains the capability to host and deliver US tactical nuclear weapons for the foreseeable future. Despite taking on a more passive nuclear posture since the end of the Cold War, the current difficulties in the Middle East will likely affect Turkey’s thinking about nuclear weapons. As the Syrian civil war worsens, and Ankara continues to grapple with how to deter a Syrian chemical weapons attack, Turkey could opt to harden its support for the forward deployment of nuclear weapons in Europe.”

Ulgen noted that divergent views of Iran and Turkey for solutions in Bahrain and Syria had led to tension between Ankara and Tehran, and this prompted Turkey to withdraw the public support it gave to the Iranian nuclear program.

Turkey, along with treating Israel as whipping boy in 2009-2010 and pressing it with the call for a ‘’Nuclear-free Middle East,’’ is now sharing a new ‘’joint threat” with Israel at a different plane: Iran and its nuclear program.

Let us repeat: This is all because of Turkey’s Syria policy.

Turkey is hard pressed to manage the phenomenal contradictions between its new and ambitious policy in the Middle East and the NATO membership it needs to alleviate its military capacity deficit.