Why does Erdogan want nuclear weapons?

President Recep Tayyip Erdogan has for the first time made his nuclear ambitions public, arguing that it is unacceptable for Turkey to not have nuclear weapons while other countries do. 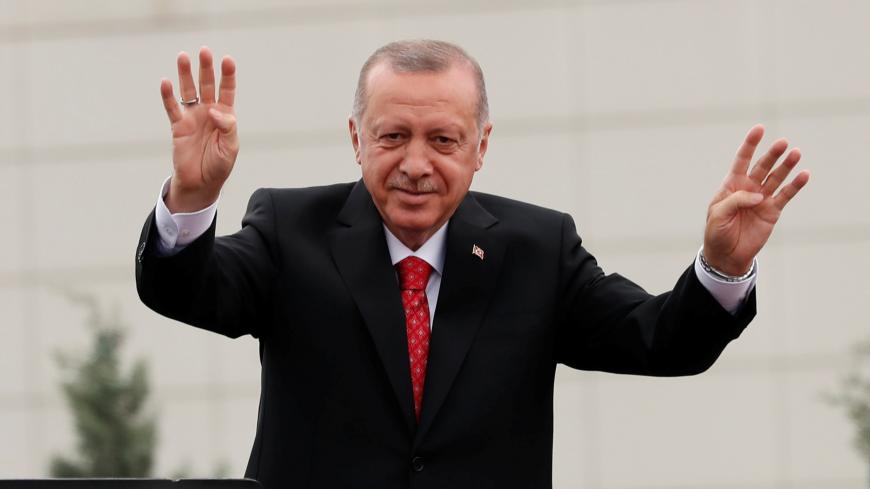 In an unprecedented move, Turkish President Recep Tayyip Erdogan declared his desire to obtain nuclear weapons, flouting Turkey’s obligations as a signatory of the Non-Proliferation Treaty (NPT). Speaking at an economic forum in the central Anatolian city of Sivas Sept. 4, Erdogan praised the advancement of Turkey’s defense industry and then said, “It’s all fine and well, yet some countries have missiles with nuclear warheads, not one or two. But I don’t have missiles with nuclear heads. This I cannot accept.”

Erdogan’s use of the singular first-person pronoun was, of course, meant to denote Turkey and not himself. His statement reflects his mistrust in the nuclear umbrella of NATO, to which his country belongs. Indirectly, it also indicates that he attributes no deterrent significance to the American B61 tactical nuclear weapons deployed at the Incirlik Air Base, in southern Turkey, as part of NATO’s nuclear program.

In further remarks, Erdogan claimed that “all developed countries in the world” have nuclear weapons and recounted an anecdote about how the former president of an unnamed nuclear country grumbled about restrictions on him. Erdogan said, “When I was on a visit there, he told me, ‘They tell us this and that, yet I have about 7,500 nuclear warheads at present, but Russia and America have 12,500 or 15,000. I, too, will make [more].’”

Signaling that he does not object to nuclear arms races, Erdogan commented, “Look at them. Look at what they are competing over. But when it comes to us, they say, ‘Don’t do it!’” In arguing why Turkey’s acquisition of nuclear arms would be legitimate, he pointed to Israel, which is believed to be a nuclear state but maintains a policy of “nuclear ambiguity,” neither confirming nor denying whether it has nuclear weapons. “There is Israel just beside us. Do they have [nuclear weapons]? They do," he said, describing Israel’s possession of nuclear arms as a tool for “bullying” the region.

As he wrapped up the topic, Erdogan made a crucial remark. “We are currently working on it,” he assured the audience, suggesting that Turkey is engaged in activities to acquire a nuclear capability. If that is indeed the case, open sources are, of course, unavailable on what those activities entail and how much they have progressed.

The Turkish Foreign Ministry, meanwhile, maintains the page “Arms Control and Disarmament” on its website, which emphasizes Turkey’s “active participation in international efforts in these areas, adherence to relevant international instruments and their full implementation.” It lists the multilateral agreements that Turkey has joined to become part of international control regimes against the proliferation of nuclear weapons and ballistic missiles. That this ministry is bound to a president who “cannot accept” not having nuclear weapons is an inexplicable paradox.

Turkey became party to the NPT in 1979 and to the Comprehensive Test Ban Treaty in 2000. It is a founding member of the 1996 Wassenaar Arrangement on export controls of dual-use equipment and technologies, which can be used both for civilian purposes and the development of nuclear arms. In 1997, Turkey joined the Missile Technology Control Regime, which aims to prevent the proliferation of chemical, biological and nuclear-tipped ballistic missiles. Finally, Turkey has been party to The Hague Code of Conduct Against Ballistic Missile Proliferation since its inauguration in 2002.

Given this background, the question is inevitable: Has Turkey under Erdogan decided to backtrack and acquire nuclear weapons? The question is not baseless. It is hard to believe that Turkey’s leaders have never discussed the option of nuclear armament. What is unprecedented, however, is that an inclination toward nuclear armament has been proclaimed so openly, directly and at the highest level.

In the years since the end of the Cold War, there had been only one previous occasion on which a Turkish official had spoken publicly on the issue. It occurred in August 2006 when military chief of staff Gen. Hilmi Ozkok referred implicitly to the nuclear option at the end of his tenure. Speaking at a ceremony marking his retirement, Ozkok began by expressing Turkey’s concern over the proliferation of weapons of mass destruction. “The presence of countries possessing or suspected of possessing weapons of mass destruction on the axis from North Korea all the way to the Middle East is a serious and determining threat for our country today,” Ozkok said.

He went on to allude to Turkey’s nuclear option, using very careful language: “If the problem [of the proliferation of weapons of mass destruction] cannot be resolved despite the intense diplomatic efforts of the international community, I see a strong likelihood that we will face some important decision stages in the near future. Otherwise, we will face the prospect of losing our strategic superiority in the region.”

The threat perception Ozkok outlined could have stemmed from Iran’s reactivation of its nuclear program under President Mahmoud Ahmadinejad, a radical adversary of the West and Israel elected in 2005, replacing the Reformist administration, which had suspended the country's nuclear program. Israel is unlikely to have fueled Turkey’s concerns, as its nuclear arsenal was already well known, and bilateral ties had not yet plunged into crisis.

The difference is glaring between Ozkok’s remarks 13 years ago and Erdogan’s Sept. 4 statement. While the chief of staff made do with insinuations, Erdogan’s assertion of ongoing work in the context of nuclear-tipped missiles is clear and explicit, leaving no room for interpretation. It is also a gesture of defiance.

Remarkably, a decade ago in remarks to Qatar’s Al Jazeera, Erdogan had called for “no nuclear weapons in the region.” At the time of the interview, Nov. 25, 2009, the Mavi Marmara flotilla crisis between Turkey and Israel had not yet unfolded, but bilateral ties were already in turmoil, and Erdogan was aware of Israel’s nuclear arsenal. He even told Al Jazeera, “Pressuring Iran is unfair and unjust while others have [nuclear weapons],” a reference to Israel, but he did not use Israel’s case to advocate Turkey’s right to nuclear weapons.

So, what has changed in a decade to lead Erdogan to defiantly ask why he cannot have nuclear missiles? Why is he pointing to Israel now, given that Israel was not an argument for justifying a nuclear option for Turkey a decade ago? Moreover, there are the well-known examples of how India and Pakistan became nuclear powers. Unlike Erdogan, their leaders never declared to the world their intentions to acquire nuclear weapons and related ballistic missiles, keeping their programs state secrets until their first back-to-back nuclear tests in 1998. Why is Erdogan doing the opposite? What is his purpose in declaring his inclination so prematurely, given that Turkey is not even a nuclear-threshold country at this point?

The answers might lie in the geopolitical bottleneck in which Turkey currently finds itself.

Turkey’s security issues have only grown more complicated with Erdogan’s acquisition of the S-400 air defense systems from Russia, a move he made against the existential threat he perceives from the United States, which, he believes, backed (either passively or actively) the failed coup attempt against him in July 2016. Because of the S-400 purchase, Turkey is now deprived of the F-35 warplanes it had paid for in addition to having been expelled from the F-35 co-production program and facing the threat of further US sanctions.

Meanwhile, the United States is backing Israel and Greece in their drive to build energy corridors in the eastern Mediterranean, shutting Turkey out, and the risk of confrontation in the region growing. Moreover, Turkey’s loss of the F-35s means that its air force, the country’s main source of deterrence, will weaken with time, and closing the gap by purchasing warplanes from Russia does not seem possible at present. On top of all this, Turkey is literally squeezed between Russia and the United States in Syria.

Faced with these predicaments, Erdogan is brandishing his nonexistent “nuclear card” to warn the forces he views as threatening him that he will move to create more instability and disorder unless they ease the pressure on him. By advocating Turkey’s right to nuclear weapons, he is sending the message that he will not step back against these forces, but will forge ahead, upping the ante.

If Erdogan’s message is taken seriously, the reactions it will spawn can hardly help Turkey extricate itself from its geopolitical bottleneck. On the contrary, all the countries and alliances that might see a nuclear Turkey as a threat would, no doubt, begin to scrutinize it closer and with more suspicion. With this framework of mistrust, increasing direct or tacit pressure, isolation and threats of sanctions against Turkey will obviously lead to more instability and disorder both in Turkey and the broader region.