Rizk, a nongovernmental organization affiliated with the Syrian Forum, has been able to secure jobs for many Syrian refugees in Turkey and now hopes to equip Syrians with the skills to rebuild their country when the war is over. 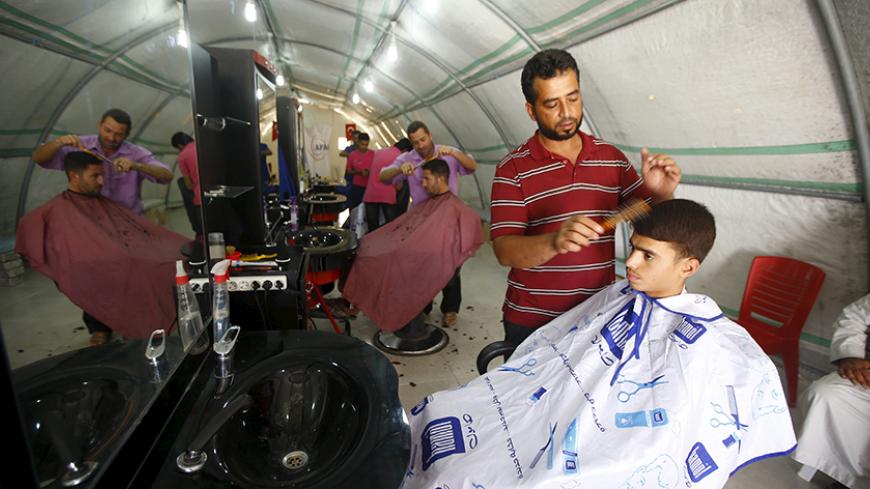 A hairdresser cuts the hair of a customer at Suleymansah refugee camp in Akcakale in Sanliurfa province, Turkey, June 11, 2015. - REUTERS/Osman Orsal

Millions of refugees fleeing the civil war in Syria have attempted to make money in nearby countries to ensure the survival of their loved ones. In Turkey, Rizk, a nongovernmental organization affiliated with the Syrian Forum, has turned around the lives of hundreds of refugees by finding them jobs.

Howraa al-Bosh, who earned a bachelor's degree in computer science, always dreamed of being a TV presenter. Escaping the war in Syria, she ended up living in the Turkish town in Urfa. She told Al-Monitor, “I heard of Rizk through people who told me the organization had been able to find employment for many Syrians. I applied and ended up working on several TV programs, such as 'Al-Ayadi al-Baydaa,' which tackled the problems faced by Syrian refugees, as well as 'Tokous Ramadiniya,' which discussed Ramadan traditions in Muslim countries for a production house called HD Production.”

Ibtissam Brahim also secured a job through Rizk. The mother of four who lost her husband during the conflict worked as a nurse in a clinic in Syria before the revolution. Stranded in Turkey with her young children whose ages range from 5 to 11, Brahim’s main priority is to provide for them. “I needed to work. I tried to find a job as a nurse but it was difficult because I was Syrian,” Brahim said.

Through Rizk, she was able to find work as a dressmaker. “Sewing is very removed from nursing, but it is a job that gives me hope. Employment allows a woman to remain independent,” she explained.

Many women, like Bosh and Brahim, found themselves without any means of survival in the wake of the Syrian civil war. The conflict there pitting the regime of President Bashar al-Assad against rebels and radical groups as well as the emergence of the Islamic State (IS) has triggered one of the largest refugee crises of our time. Today, some 8 million Syrians have been internally displaced and about 4 million Syrians have sought refuge in nearby countries such as Jordan and Lebanon. About 1.8 million have been granted refugee status in Turkey, according to the UNHCR. Most of those running from war have lost everything in the process, including their houses, belongings and jobs.

Anas Shehab created the Rizk project in December 2013. The activist opened his first “office” in a coffee shop in Urfa, finding positions for a driver and a teacher in his circle.

Shehab told Al-Monitor in an interview, “The refugee problem grew as the conflict extended in time. In my view, the refugee issue had worse implications than the bombings. Refugees who are left jobless and without means of survival can become the devil: They can turn into [pro-Assad militants] or join the likes of Jabhat al-Nusra and IS. Providing them with employment allows them to reintegrate into society and gives them hope for a better life.”

The activist eventually set up a small office with a few volunteers working as intermediaries between job seekers from the Syrian refugee community and Turkish business owners and companies. As it grew, the NGO was endorsed by the Syrian Forum, a consortium of NGOs that formed in 2011. The group's goal is to build the capacities of Syrian individuals and institutions as well as establish and support civil society organizations devoted to Syrians.

There are nonetheless many obstacles in the paths of refugees seeking employment, Shehab admitted. Some do not have the necessary qualifications, and there are language barriers. There is also a high turnover rate in the some of the work available, due to harsh conditions and long working hours of 10 to 14 hours per day.

Mohamad Ibrahim, who found a sales job through Rizk, told Al-Monitor, “Some employers pay us less than they are supposed to or fail to pay us at the end of the month. What can you do?”

In spite of the difficulties, Rizk managed to find employment for some 1,400 Syrian refugees in 2014 and for 900 others in the first six months of this year. “This has a huge impact on the refugee community and an important trickling effect, if we calculate that each employed Syrian earns an average of $500,” Shehab said. The NGO receives about 50 to 100 applicants a day and has about 17,000 applications still outstanding. Job seekers generally either apply physically or online.

Rizk operates with a small income of about $8,000 per month and a staff of nine employees, including four volunteers. It has managed to open several training centers with the help of the Turkish government and several other NGOs. “The goal is to allow Syrians to learn new skills if they cannot make use of their original profession,” Shehab said.

Rizk has relied on a two-pronged marketing approach, sending representatives to industrial areas and local businesses as well as attending local fairs. The organization has placed people in Istanbul and Gaziantep, among many other cities.

To expand its operations, Shehab said that the NGO will need to increase its capital to $15,000 or $20,000. Funds are urgently needed to serve the 680,000 Syrians he says have found refuge in Urfa and are mostly unemployed.

“I am single but I need a job to support the rest of my family. It’s a matter of survival, to put a roof over our head and food on the table,” Brahim underlined.

Shehab said that Rizk has greater ambitions than just finding employment for refugees. “The people who have been trained and worked in the best Turkish companies will be better suited to rebuild the country when the time for peace comes. They will have the necessary skills for the reconstruction of the country.”