Brent Scowcroft, former Republican US national security adviser, tells Al-Monitor that US failure to implement the nuclear agreement with Iran “would be an abdication of America’s unique role and responsibility, incurring justified dismay among our allies and friends.” 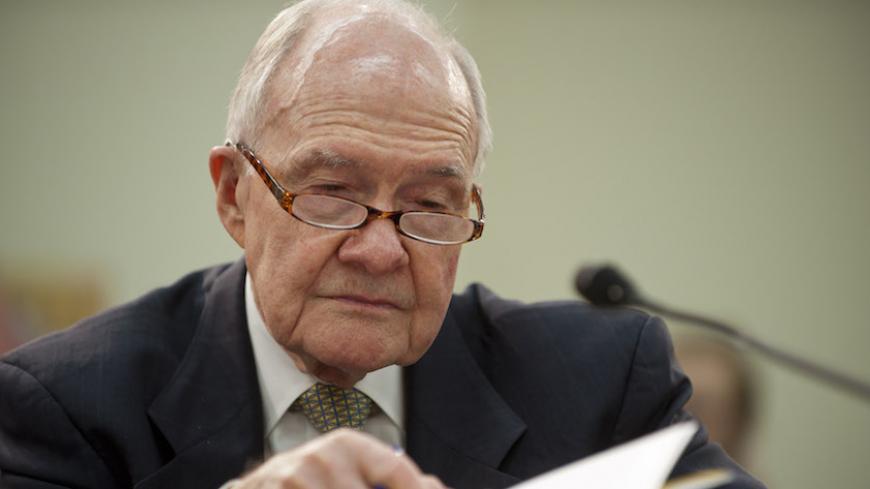 Bipartisanship, which has been in short supply since the Iran nuclear agreement was announced in July, is showing tentative signs of life as Congress nears an important vote on the issue.

In a draft op-ed that was shared in part with Al-Monitor on Aug. 13, Brent Scowcroft, former national security adviser to President George H.W. Bush and a trusted confident of many of Bush’s successors, said that in his view the Joint Comprehensive Plan of Action (JCPOA) with Iran “meets the key objective, shared by recent administrations of both parties, that Iran limit itself to a strictly civilian nuclear program with unprecedented verification and monitoring by the IAEA [International Atomic Energy Agency] and the UN Security Council.”

“To turn our back on [the JCPOA] would be an abdication of America’s unique role and responsibility, incurring justified dismay among our allies and friends,” Scowcroft wrote.

Earlier, on Aug. 13, former Sen. John Warner (R-Va.) published an op-ed with another former chairman of the Senate Armed Services Committee, Carl Levin (D-Mich.), supporting the deal reached between Iran and the five permanent members of the UN Security Council plus Germany on July 14.

Taking a different tack than Scowcroft, Warner and Levin argued that US failure to implement the JCPOA would undercut any potential US military deterrent against Iran.

“It’s highly unlikely that our traditional European allies, let alone China and Russia, would support the use of the military option since we had undermined the diplomatic path,” the veteran former legislators wrote. “Iran surely would know this, and so from the start, would have less fear of a military option than if it faced a unified coalition.”

Other moderate Republicans have indicated in the past that they would likely support the Iran agreement but have been reluctant to say so publicly since the deal was announced.

Recent queries to former George W. Bush national security adviser Stephen Hadley went unanswered, even though Hadley praised the interim deal reached with Iran in 2013 and in 2014 told Al-Monitor he was “optimistic” about achieving a long-term comprehensive accord.

In that interview, Hadley acknowledged that any viable accord would permit Iran to maintain a limited uranium enrichment capacity. He also said, “At the end of the day, if we can come up with a limited enrichment capability that really puts the Iranians back so that breakout is a year to 18 months away [instead of the current few months], if the alternative is a military strike and all the international isolation of Israel that is likely to follow that, my guess is that the Israelis will choke down the agreement.”

According to President Barack Obama's administration, Iran would be unable to amass enough fissile material for a nuclear weapon — so-called breakout time — for a year if the JCPOA is implemented. It achieves this in part by limiting Iran to 300 kilograms (661 pounds) of low-enriched uranium — a quarter of what would be needed if further enriched to make a single nuclear weapon for 15 years.

Hadley made his earlier comments before George W. Bush’s brother, Jeb, became a candidate for the Republican presidential nomination. Hadley is now among a group of former senior Republican officials advising Jeb, who — along with all the other so-far announced Republican hopefuls — has expressed opposition to the Iran deal.

Another former high-level Republican public servant who has also refused to weigh in publicly on the JCPOA so far is Colin Powell. In office from 2001-2004, Powell strongly supported European negotiations with Iran over its nuclear program. Powell also broke party ranks and endorsed Barack Obama for president in 2008. A Powell assistant said her boss had not taken a position yet.

Some Republicans may be waiting until Congress returns from its August recess before jumping into the Iran debate to have maximum impact. Under the terms of compromise legislation passed in the spring and signed by Obama, Congress, which has conducted extensive hearings on the issue and received many private briefings from administration officials, has until Sept. 17 to vote on a resolution of disapproval of the JCPOA.

It remains unclear what, if any, impact prominent Republican validators might have on the congressional debate. A handful of Republicans in the Senate have been considered possible “no” votes on a resolution to disapprove the JCPOA or at least unlikely to vote to override a presidential veto of such a resolution.

Among this group is Sen. Jeff Flake (R-Ariz.). Indicative of the administration’s efforts to woo Flake, President Obama took him on a trip to Africa last month. Secretary of State John Kerry invited him along to observe the formal reopening of the US Embassy in Cuba on Aug. 14.

Some commentators have faulted what they regard as a highly partisan speech last week by Obama at the American University for turning away possible Republican supporters. In the speech, Obama equated some of those opposing the deal with individuals who backed the US invasion of Iraq in 2003. He also suggested that Iranian hard-liners who chant “Death to America” are “making common cause with the Republican caucus” on Capitol Hill.