Brent Scowcroft, a veteran Republican voice on US foreign policy, said the US “isn’t smart enough” to solve the Syria crisis and that intervening in Egypt "will create more problems in the long run” in an interview with Al-Monitor's Barbara Slavin, indirectly criticizing hawkish advisers to Republican presidential candidate Mitt Romney. 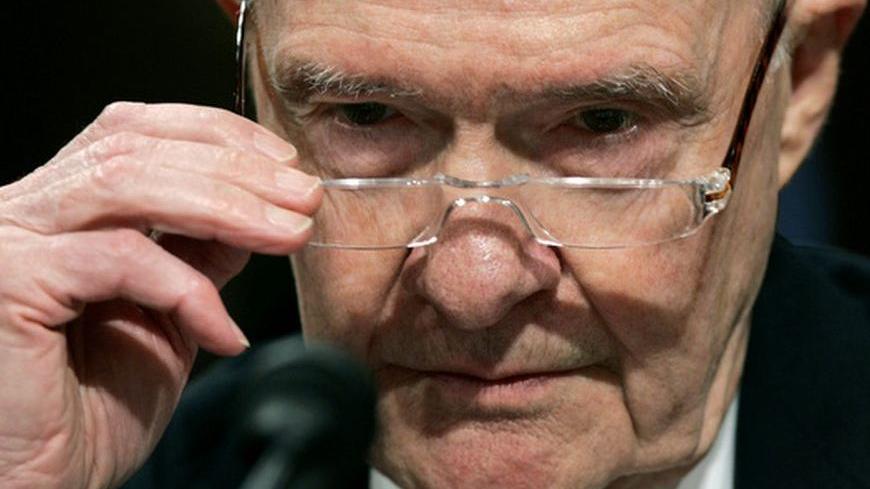 Brent Scowcroft, a veteran Republican voice on US foreign policy, said the United States “isn’t smart enough” to solve the Syria crisis and “would pay a heavy price for [military] intervention,” in an interview with Al-Monitor Washington correspondent Barbara Slavin. Scowcroft, national security adviser to former US presidents George H.W. Bush and Gerald Ford, criticized hawkish advisers to Republican presidential candidate Mitt Romney regarding Syria and Iran, without naming names. Known for his pragmatism, he also urged caution in dealing with Egypt, flexibility in Iran nuclear talks and an arms control process to regulate the use of cyber warfare. Excerpts from the interview follow:

Al-Monitor: The constitutional court ruled today that one-third of Egypt’s parliament was not properly elected and there are presidential elections coming up. Is there anything the US can do to shape what is going on there or do we just have to be bystanders?

Scowcroft: I’m not sure we should try to shape what’s going on. It’s particularly Egyptian, the forces that are there, some of them traditional, some of them new...The role of the army is complicated. We forget that in a way, it’s been a military government since [Gamal Abdel] Nasser… If we are asked, we should encourage in proper ways but intervening will create more problems in the long run than the good it can do…We’ll wring our hands a number of times but I suspect it will come out in the end with some moderate sort of a solution.

Al-Monitor: On Syria, Rich Williamson (an adviser to Republican presidential candidate Mitt Romney) says we should be arming the rebels and the Wall Street Journal says we are already providing logistical help and considering giving intelligence to them.

Scowcroft: Syria is a very complicated country. The only one conceivably more complicated is Lebanon but they both have similar problems… We intervene at our peril. If Assad were to leave tomorrow, Syria would not be a paradise of peace.

How do we identify the good forces? Are they the Sunni forces? Non-Alawite Shia forces? It’s not clear to me that we know how to do that. We thought it was simple in Libya yet Libya has taken very few steps beyond getting rid of Qaddafi… [Just like we went] into Iraq and solved the Iraqi problem, Afghanistan and solved the Afghan problem. We’re not smart enough to deal with some of these problems…You notice the Turks who are as closely involved as anybody are being very careful.

Al-Monitor: Was Secretary of State Hillary Clinton right to object to Russia’s sending helicopters to Syria given that the US is stepping up its support to the rebels?

Scowcroft: It’s one of those real dilemmas. Are we trying to stop violence or do we just want our warriors to win? What we ought to be shooting for is what [UN and Arab League envoy] Kofi Annan tried to do, which is a cessation of violence because that is what’s killing the innocents.

Al-Monitor: But Bashar al-Assad is clearly not acceptable to many of his people.

Scowcroft: Assad never was…  Just because there’s a problem doesn’t mean there’s a solution. We would pay a heavy price for intervention. Making the battle more even doesn’t solve the basic problem, which is the terrible killing of innocents going on.

Al-Monitor:  Along with Ms. Clinton’s comments about the Russians, she also said it was a “red line” that Iran should not take part in a contact group on Syria  that Annan is trying to put together. Given that the Iranians today are in talks on stabilizing Afghanistan, why do we have this position regarding Syria?

Scowcroft: I don’t understand it either… If you only talk to your friends, it’s pretty hard to solve your problems… Iran clearly has interests which they are pursuing in Syria… Syria has been an outlet for Hezbollah and Hamas… To imagine we can have a settlement and Iran be ignored doesn’t seem to me particularly realistic. They can make things tougher than they are right now.

Al-Monitor: We’re having another round of nuclear talks coming up. The Iranians are being asked to curb enrichment in return for spare parts for airplanes plus some fuel for the Tehran research reactor and safety upgrades, but there is no postponement of European sanctions due to come into force at the end of this month. Do you see a potential in these talks? Is there a better deal you would be offering?

Scowcroft: I think there is some potential in the talks. The deal I would like to see… is to make moves which would not single out Iran… What I would like to see the US do is to internationalize the fuel cycle so non-weapons states don’t enrich uranium… I would even go so far as to say, okay, you want to be one of the states that provide it? Okay, then, your plant belongs to, and is supervised by, the IAEA [the International Atomic Energy Agency].

Al-Monitor: What about postponing some of these sanctions?

Scowcroft: The danger is we’ve postponed them before and Iran doesn’t do anything. This is a case of fine judgment. If some relaxation of the sanctions for a time — if we think there’s a realistic chance that you go a step farther—I would do it… I wouldn’t draw rigid rules. What we should be trying to do is to move this process along and do it in a way which achieves our objectives, which may require that Iran doesn’t feel humiliated. It’s easy to say. It’s very hard to do.

Al-Monitor: A new survey shows that the image of the United States has sunk again in the Middle East because of failure to resolve the Arab-Israeli dispute and a strong reaction against the use of drones…Obama is a big supporter of special ops, drones, is this the way to go?

Scowcroft: It’s not accidental that a lot of the Middle East feels this way because a lot of our activities came from the Israelis. It psychologically looks like we are policemen, judge, jury, executioner… without any safeguards and protections and because we’re doing it, it’s okay.

Al-Monitor: Should we scale back? They are killing al-Qaeda people.

Scowcroft: That’s a huge question. The whole drone thing is very complicated. What do we do if drones start flying over the US? It’s an issue that hasn’t been debated in this country... Several aspects of what we call the war on terror are a problem. [It] goes back to our traditional notion of warfare which is very different from what we are doing now. There are certain recognized rules for warfare. These rules we are making up as we go along and they are wholly unilateral.

Al-Monitor: What about cyber-attacks?

Scowcroft: We need to look at the whole cyber issue the way we gradually started looking at nuclear weapons. At the beginning, nuclear weapons were just a bigger weapon and they were ours and boy, they were wonderful. Only gradually did we come to recognize the threat to civilization that they were and, potentially, cyber is to our whole way of life and say, maybe… you need to establish what we’ve done on nuclear weapons, which may well have prevented a nuclear war.

Al-Monitor: You mentioned Israel, what can we do, given our domestic politics, to influence the Israelis not to attack Iran and to re-engage with the Palestinians?

Scowcroft: What to do about Iran is to make clear … the critical nature of that issue to US interests… The Palestinian issue has been subordinated by the Arab spring so far. My own hunch is that won’t last much longer. If the Arab spring is really a call for dignity, then the Palestinians are a graphic case and we could see additional troubles. The solution is pretty generally known… The [George W.] Bush administration came close but the United States never said these are conditions that we think are truly just and equitable and we support them. If we did that, the Europeans would join and it would pressure both sides… It’s increasingly unlikely the two sides by themselves can ever make a deal… They have to be able to say to their people, ‘we’re not crazy about this but the Americans made me do it.’

Al-Monitor: You’ve noted that the Arab monarchies have so far managed to weather the Arab spring better than so-called Republics. Is that tenable in the long term?

Scowcroft: The monarchies have more tradition behind them which maybe adds to legitimacy… If you leave out Jordan, the monarchies are generally more wealthy and some of them use that wealth extensively… Each country is different. The Arab spring has hit them all, but the reaction depends on the internal structure of the country… We’re in for a long process and it’s probably step 3 or 4 in the evolution of the Middle East.