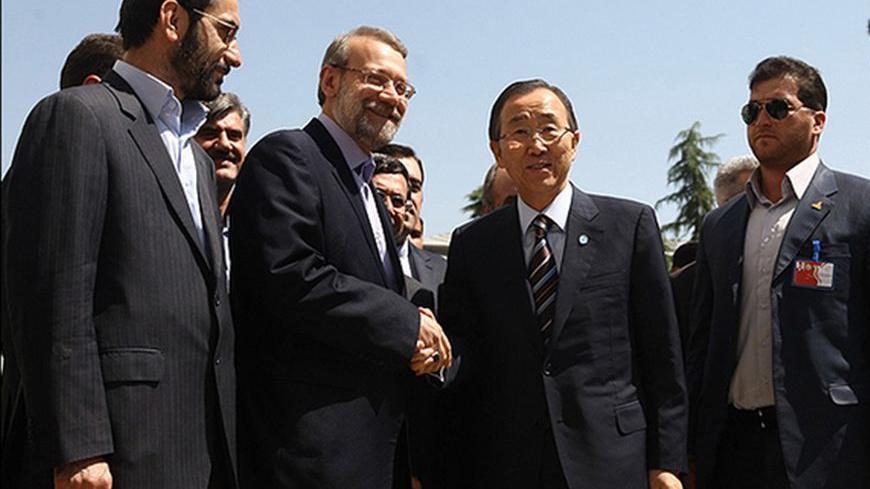 TEHRAN — Iranian parliamentary speaker Ali Larijani Friday dismissed Israeli threats to attack Iranian nuclear installations as “suicidal” and said that it would not make much difference to Iran who was elected president of the United States. In an exclusive interview with Al-Monitor at Iran’s historic parliament chambers, Larijani, a member of a prominent Iranian religious family and Iran’s former chief nuclear negotiator, also denied allegations that Iran has used a site called Parchin for nuclear work. Larijani maintained that US, Turkish and Arab support for Syrian rebels was fueling the civil war in that country and said that Iran would not abandon its long-time ally, President Bashar al-Assad, despite the deaths of more than 20,000 people in Syria in the past 18 months. He accused the US of wanting “to make a new Benghazi,” referring to the Libyan opposition stronghold that was recognized by many countries before the downfall of long-time Libyan dictator Moammar Gadhafi.

Al-Monitor:  In its latest report, the International Atomic Energy Agency (IAEA) expressed dissatisfaction with Iranian cooperation and said Iran had been conducting activities at Parchin that would “significantly hamper the Agency’s ability to conduct effective verification” of suspected nuclear activities. It also said that Iran has added to its stockpiles of 5% and 20% enriched uranium.

Larijani:  This is a cliché because we don’t accept the resolutions of the UN and we think it’s not fair because it talks about the additional protocol [of the Nuclear Non-proliferation Treaty, which Iran has signed but not ratified] … and says all the [nuclear] activities should be suspended. We don’t accept suspension. About the figures you mentioned [for enriched uranium], is it against the regulations? Because we are members of the IAEA and we are entitled to enrich. They [IAEA inspectors] are there to report these things. They are present. So what sort of a violation is it?

About Parchin. It is not related to nuclear issues … We are not supposed to respond to any claims by just anyone. Mr. El Baradei [the former IAEA chief] was saying ‘we don’t have any documents.’ These are just claims.

Al-Monitor:  What about the famous laptop that is supposed to contain evidence that Iran before 2003 conducted activities related to developing nuclear weapons?

Larijani:  This is all just stories like the story of the [attempted] assassination of the [Saudi] ambassador to the US. It seems that the US gets romantic. They are poetic on these things.

Al-Monitor:  Despite what you say, the Israelis say Iran is working toward developing nuclear weapons, and Israeli leaders have been threatening to attack Iran’s nuclear sites. Do you take these threats seriously?

Larijani:  There’s no reason that we consider them [the Israelis] so stupid. This is like committing suicide. We don’t think they will do it.

Al-Monitor:  Then why do they talk about it all the time?

Larijani:  It’s very clear. There’s a long time that Israel is in isolation after they were defeated in the 33 days war [between Israel and Hezbollah in Lebanon in 2006], which was heavy and devastating for them … and also the revolutions that happened in the region. Now they are in political isolation. Now Hosni Mubarak is gone … so they should say something to prove they still exist.

Al-Monitor:  Besides Mubarak being gone, Assad is in real trouble and the new Egyptian President Mohammed Morsi said here Thursday that the Syrian government is an oppressor. Why is Iran supporting a regime that has killed 20,000 people in 18 months?

Larijani:  As we supported the Egyptians, we support the Syrian people to get their rights and also the people of Bahrain. ... But there are also countries in the region and the US that are responsible for so much bloodshed ... They send weapons into Syria … and also supply financial resources, political support and media support. It’s obvious that's what happens — that there are clashes. But responsibility for that bloodshed lies with the countries that are trying to make a new Benghazi. We want to solve the problem in a peaceful way.

Al-Monitor:  How is that possible when Assad has so much blood on his hands?

Larijani:  Who are you to say [that Assad should go]? Leave it to the votes of the people … Is the issue democracy really? Some of the Arab countries that are supporting this — are they democratic countries? Do they have a congress? Even they don’t let women drive in the streets … I think it is a big mistake by the West to go on using someone else’s stick. …That’s the same mistake the US and UK made in Afghanistan. They were happy in the beginning that they have made an extremist movement but later it became a nuisance for themselves.

Al-Monitor:  But Morsi is the first democratically elected president of Egypt ever and he supports the opposition in Syria, so how do you reconcile your positions?

Larijani:  We have 34 years of democracy [in Iran]. We have friendships but we have also some differences with others. ... It is not possible that two countries will think the same way and do the same thing.

Al-Monitor:  Turning to internal Iranian politics, there have been stories that the Supreme Leader wants to change the system so Parliament will choose the president, not the people.

Larijani:  It doesn’t mean that it’s going to happen, but it is a possibility.

Al-Monitor:  Could it happen next year?

Al-Monitor:  Will you run for president again?

Larijani:  You should work on the position of Mr. Obama [not ask about the presidential aspirations of Larijani, who ran unsuccessfully for president in 2005].

Al-Monitor:  Would you like Mr. Obama to be re-elected?

Larijani:  It doesn’t make much difference. When he was coming to the presidency, he was saying different stories about Palestine, the rights of Muslims but he didn’t really do much about it.

Al-Monitor:  And Mitt Romney doesn’t frighten you? He sounds pretty tough about Iran.

Larijani:  I don’t think people and personalities make so much difference … because there are systems and the systems think and work according to their own national interest.

Al-Monitor:  I read as I was flying to Tehran that Iranian opposition leader Mir Hossein Mousavi had a heart attack, was taken to the hospital and then put back under house arrest. Is this true, and how long will you keep Mousavi and Mehdi Karroubi prisoners in their own homes?

Larijani:  As far as I know, it is not correct [that Mousavi had a heart attack] … It is the responsibility of the judiciary system to look into it [the house arrest].

Al-Monitor:  But that’s your brother [Sadegh Larijani, the justice minister]?

Larijani:  Running the country is not a family business and that has nothing to do with this…

Al-Monitor:  The sanctions are so strong now. How bad is the damage to the Iranian economy, to the people and isn’t there some way you can resolve this nuclear issue so people can breathe a little?

Larijani:  Of course there have been some difficulties because of the sanctions. Some of them are domestic problems … There have been other periods of time of heavy inflation. Under [former President Ali Akbar] Hashemi [Rafsanjani], there was inflation of 50-60%.  Was it because of sanctions at the time?

Al-Monitor:  So Iran can survive all of this — the European oil embargo, the loss of value of the Iranian currency?

Larijani:  Certainly, definitely … We are used to hardship. When the [Iran-Iraq] war was imposed on us, it was much harder and the whole world was supporting Saddam [Hussein] …  Did they succeed to get any part of our territories? Because our people are very resistant to this. The question is why the Americans are doing all these things. The Americans should be happy because we got rid of a dictator and we freed our people and established a democracy. Why are they so hostile? And if it is really hurting people, why do the Americans do this?