Part of Israel's motivation for being so public about a possible attack on Iran is to prepare Israelis and the rest of the world for an actual attack, said Mideast troubleshooter Dennis Ross in an interview with Al-Monitor's Laura Rozen. The rhetoric isn't just a bluff, but that doesn't mean there's a day-after strategy. 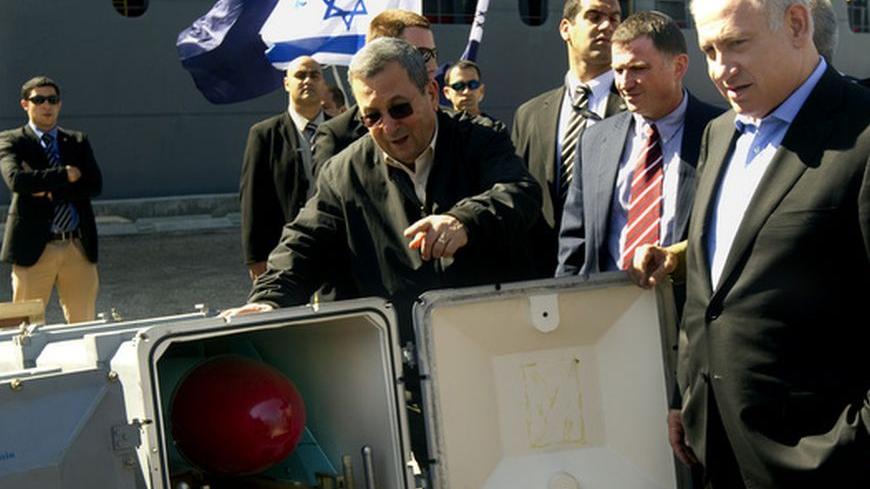 Israeli Prime Minister Benjamin Netanyahu (R) and Defense Minister Ehud Barak examine a C-704 anti-ship missile at the southern port of Ashdod on March 16, 2011 as Israel displayed the haul of weapons it discovered on a seized ship it says was carrying arms being smuggled from Iran to Palestinian militants in the Gaza Strip. - JACK GUEZ/AFP/Getty Images

“Part of the motivation for being as public as they have been is to motivate the rest of world," Ross, who served as the top Obama White House Iran strategist from 2009 to the end of 2011, told Al-Monitor in an interview Tuesday.

“The second reason is to condition the rest of the world not to be surprised if or when they are going to act militarily,” Ross said. “And to get the Israeli public ready as well.”

“That doesn’t mean that they have made a decision. It’s not about to happen tomorrow.” Ross continued. “If it happens tomorrow, it’s rather late in terms of getting the Israeli public ready. But I do think it means one cannot just dismiss it. Those who say it is just a bluff are misreading.”

But while Ross did not discount the prospect that Israel may do it, he warned, as he has in the past that, while “you have military means, you don’t have a military solution” to the Iran nuclear program. “You have to look at what the day-after strategy is going to be.”

Ross now serves as a senior fellow at the Washington Institute for Near East Policy, and occasionally advises the White House and NSC. He spoke to Al-Monitor’s Laura Rozen on August 14.

Al-Monitor How do you read the notable uptick in Israeli rumblings about possible fall action against Iran?

Ross I think you have to look at what Israeli leaders are saying publicly. If you look historically,  when the Israelis struck Osirak [in Iraq in 1981] or Syria [in 2007], they didn’t talk about it. Those were each single targets, not widespread.

The second reason is to condition the rest of the world not to be surprised if or when they are going to act militarily. And to get the Israeli public ready as well

Al-Monitor The fact that the recent flurry of reports is being trafficked in the Israeli press would suggest the primary intended audience is the Israeli public.

Ross Before, they were trying to condition the rest of the world. Now [the public discussions is] much more to prepare the Israeli public if they act. It is also to answer critics within Israel. Part of addressing these arguments is to speak to the Israeli public and those raising basic questions about it.

That doesn’t mean that they have made a decision. It’s not about to happen tomorrow. If it happens tomorrow, it’s rather late in terms of getting the Israeli public ready. But I do think it means one cannot just dismiss it. Those who say it is just a bluff are misreading things.

Al-Monitor What’s imminent in Iran’s progress or behavior to warrant the sudden sense of urgency?

Ross I think it’s not so much that… This is not a science.  And  I think there is a kind of false precision that is created. It is not so much the case that in X number of days suddenly Israel is facing what [Israeli Defense Minister] Ehud Barak calls the “zone of immunity.” The longer time goes on, certainly from Barak’s perspective, the less impact any Israeli military operation is likely to have. And so, he is, I think, looking at this from already feeling that the accumulation of [low- enriched uranium], the proliferation of facilities, the hardening of those facilities, the combination of these factors are rendering an Israeli military option less and less effective as time goes by.

Ehud Barak in particular views that process as one that is eroding the effectiveness of what Israel can do. What he is effectively trying to say, and what he has been saying for some time, this is not only recent, is that the time when Israel would have to act is approaching rapidly.

Al Monitor Barak has also repeatedly rejected the idea that Israel should outsource its security in any case to anyone else.

Ross: It’s part of the DNA. Because of their history. The failure of the US or the international community to fulfill its obligations in 1967 is very much a part of the Israeli psyche.

Al Monitor At the same time, the US and Europe have only last month implemented draconian new sanctions that Israel has been championing. There’s no way anyone could think they would get Iran to compromise in just a few weeks.

Ross: I would like to see more time [for the sanctions and diplomacy to work]. I have said it publicly. You have military means; you don’t have a military solution. You have to look at what the day-after strategy is going to be. Look at whether or not you have created the conditions to meet the needs after there would be a strike.

Al Monitor  Lead US Iran negotiator, Under Secretary of State for Political Affairs Wendy Sherman, is in China and Russia this week. Do we think she is trying to suss out what they would be willing to do if the P5+1 is unable to persuade Iran to accept a compromise? To be part of a possible post-strike sanctions regime to contain Iran, something you suggested last summer the US might eventually have to do?

Ross: When I wrote the piece I did [“Calling Iran’s Bluff: It’s time to offer Iran a civil nuclear program,” The New Republic, June 15, 2012), I was looking at two perspectives. To see if a deal is still possible, and if Iran was willing to accept a proposal that would offer it civil nuclear power but with limitations that would prevent a break out capability.

In other words, my suggestion was to offer a real proposal… to see if Iran would be prepared to accept it or not. The flip side of that is if [the US/P5+1] had done that [given Iran such a “go-big,” offer] and been turned down, it’s  a different situation. Iran would be exposed for not really wanting civil nuclear power, but rather a nuclear weapons capability.

Al-Monitor The Iranians have the perception — as arguably do the Israelis and others, perhaps — that the White House may be in a better position to negotiate and offer a better deal only after the US presidential elections. Whether or not the perception is accurate, it seems to be a factor. And I have not heard a lot from the US to dispel that notion, if it is not accurate. Given what may be a shorter time window for diplomacy.

Ross I do think the Iranians may perceive that. You have seen the administration ramp up the rhetoric [that it will use all means to stop Iran from preventing a nuclear weapon], not only to persuade the Israelis, but also to try to persuade the Iranians. They [the Iranians] shouldn’t have the perception that the US is somehow going to have a different position after the elections. The objective is the objective. That is one of the issues here.

The Israelis look at this, and are persuaded that at this juncture, the Iranians think they can play for time. The feeling is that they are absorbing an economic cost because of that. The question, and part of what is driving the Israeli debate, is to try to affect Iranian perceptions. We live in a world where whatever you say has multiple audiences.

Al-Monitor: Maybe it’s in part bluster, but current and former Iranian officials seem genuinely unfazed to the point of mystification by the prospect of an Israeli attack. They think it either is unlikely to happen, and or would be worse for Israel in the region than for them.

Ross: I think they want others to feel that. But they are not interested in inviting an Israeli attack. And they do not want an American strike.

Al Monitor: After this recent cavalcade of senior US officials to Israel — National Security Advisor Tom Donilon, Defense Secretary Leon Panetta, Secretary of State Hillary Clinton — to confer on Iran and try to dissuade them from acting unilaterally, do you think the US is just now sort of resigned to the prospect that Israel may go ahead and do it?

Ross: Three high-level visits in a short period of time suggests both a determination to have the closest possible discussions on the one hand, and to be as clear as possible about what is likely to happen.

They are not only about American efforts at dissuasion. They should be read also as to try to the maximum to assess what the situation is. And number two, to understand each side’s position. Three, to speak about what needs to be done to foster a common objective, on which there is no disagreement: prevention. And the best means to achieve that.

Words also have an effect. If the Iranians think that basically the only thing they are facing is economic pressure, they look at time one way. If they begin to believe that force could possibly be used against them, their sense of timing may be different.

Al Monitor: A former Iranian diplomat recently told me that Iran will likely move to resolve the nuclear dispute by next spring.

Ross: A few days ago, [former Iranian president Hashemi] Rafsanjani said something similar... Are those things only emerging because of the economic costs [from the sanctions]? Or because they saw [the tougher] American rhetoric?

Al Monitor: So if you had to put money on ‘will they’ or ‘won’t they,’ what would you bet?

Ross: I don’t know… From the Israeli perspective, they don’t see a deal or any change in Iran’s behavior. A lot of this is putting everyone on notice, including the Iranians.

I think the odds are going up.