In an interview with Al-Monitor's Barbara Slavin, Richard Williamson, a foreign-policy adviser to Mitt Romney, says the US should be willing to intervene in Syria as Clinton did in Kosovo. He also demanded that Iran cease all uranium enrichment and said the US should be more loyal to Israel, which he said Obama has thrown "under the bus." 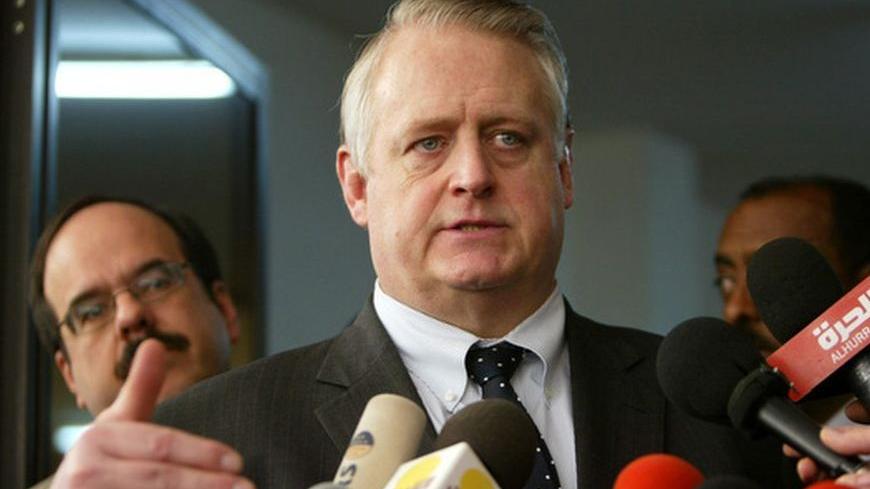 Richard Williamson, a top foreign policy adviser for the Mitt Romney campaign, said that the US should arm selected rebel forces in Syria and be willing to go beyond the UN Security Council to intervene in Syria as President Bill Clinton did in Kosovo, if necessary. Williamson also demanded that Iran cease all uranium enrichment and said the US should be more loyal to Israel, which he said President Barack Obama had thrown "under the bus."

“You get more respect by being honest, candid and forthright than by overselling and undercutting your friends and failing to get concrete results and that’s the record of the Obama administration,” he said. Williamson, a former US ambassador to the UN for political affairs, assistant secretary of State and special envoy to Darfur under the George W. Bush administration, made the remarks in an interview with Al-Monitor Washington correspondent Barbara Slavin. Other excerpts follow:

Al-Monitor: In an interview on Friday (June 8), you said that there are Syrian rebels the US should be arming. How do we identify them and how can we be sure they would serve US interests in the long term?

Williamson: The first thing is we should be in there… You can have covert operatives, others you are working with, Turkey and … working with exiles, just like we did with Libya. The suggestion that you should lead from behind is folly in a case like this. We have great strategic interests in Syria. The commander of Central Command [Gen. James Mattis] said that the greatest strategic blow to Iran would be a change of the Assad regime… The question really is why haven’t we done more in the last 14 months.

Al-Monitor: Do you think it’s going to be necessary at some point for the US to inject its own forces, beyond special forces?

Williamson: Sens. [Lindsey] Graham, [Joe] Lieberman, [John] McCain and others are calling for steps like that. Gov. Romney has been very judicious and careful, very prudent and not taking that step. He’s not said that’s something he’d be supporting because we’ve not gotten to that point yet. Right now we should be … arming the moderates among the opposition, going more forcefully at the UN Security Council. But just as importantly in the end, we can’t let Russia determine what we can and cannot do... If we used that criteria, we never would have gone in to stop the ethnic cleansing in Kosovo. President Obama should take a lesson from President Clinton.

Al-Monitor: If you antagonize Russia, they may be even less cooperative. Was it wise for Gov. Romney to call Russia our biggest strategic foe?

Williamson: Let’s look at Russia. Undeniably there’s been an authoritarian drift in Russia in the last three-and-a-half years. [Vladimir] Putin has crowded out civil society. He conducted presidential elections [that] European observers said didn’t meet international standards… and … put new and burdensome restrictions on protests. At the same time, Russia continues its illegal occupation of Abkhazia, which is Georgian territory, uses its energy to abuse and intimidate Eastern Europeans, continues to be less than helpful on North Korea; Russia has not been helpful on Iran. So when you say we should be concerned about Russia’s attitude, I think you have a hard time coming up with a brief that says that President Obama’s reset policy has worked. In fact, it’s a reset policy that needs to be reset; it hasn’t worked.

Al-Monitor: On Iran, the Russians have supported UN resolutions and maintained unity on the P5+1 demands.

Williamson: There have been six resolutions on Iran; all but one of them were under President Bush before this reset policy.

Al-Monitor: The toughest one in 2010 was under Obama.

Williamson: The most stringent are what the US Congress forced Obama to apply. The administration took an approach with Iran just like it did with Russia. It was a naïve approach of engagement and that the president’s rhetoric could bend their behavior. They continued to act in a way they thought was in their interest. Russia continued to help complete one of the reactors in Iran and … there were many times before and after 2010 when there were tougher resolutions and Russia and China refused to support it… Russia has not …been a supporter of the type of tough sanctions and regimes that have been necessary to get Tehran to change its quest for nuclear breakout…a quest that has gained substantially in the last three-and-a-half years.

Al-Monitor: Would you pull out of the talks that are scheduled to resume next week?

Williamson: No. President Romney will seek a negotiated settlement…but the fact is that Bismark, the greatest diplomat of modern times, was correct: Diplomacy without a credible threat of military force is like music without instruments. It doesn’t work. This regime has absolutely no reason to be concerned about military action from the West and in particular the United States based on the president’s behavior. What Gov. Romney has made clear is that we need to stay consistent with UN Security Council resolutions and demand zero enrichment. We can try and talk and see if we can find ways to accommodate legitimate interests of Iran with respect to peaceful nuclear use and research but they can’t be in a position of enriching uranium which makes breakout a possibility.

Al-Monitor: If at the talks next week, the Iranians agree to cap enrichment at five percent, send out their whole stockpile of 20 percent uranium and close down the Fordow facility, what would be the reaction of you and Gov. Romney?

Williamson: My reaction is it’s a violation of international law and UN Security Council resolutions [which call for] a total suspension of enrichment.

Al-Monitor: You’ve talked about a credible threat of military force yet much, if not all, of Israel’s intelligence and defense establishment oppose a strike, saying that would push Iran to develop nuclear weapons.

Al-Monitor: A poll that just came out showed that there has been a drop in approval of the US in the Mideast since 2009 mostly because of drone strikes, other perceived unilateral military action and the failure to broker a Palestinian-Israeli peace agreement. Are you concerned that Gov. Romney’s identification with Israel would make that situation worse and it would be harder for the US to achieve its broader goals in the region?

Williamson: No… President Obama came in with great hope and expectation in various parts of the world including the Middle East. Having thrown Israel under the bus on many occasions with respect to how he’s approached the settlements, prospective borders for a Palestinian-Israeli agreement, haven’t improved broader perceptions in the Middle East. Gov. Romney will be clear and open. He supports our friend, the democratic state of Israel. But at the same time, he would like to have a negotiated resolution of the Palestinian-Israeli conflict. Unlike President Obama, there won’t be significant public proclamations where there haven’t been discussion with the Israeli government…People expect us to be loyal and reliable to our friends… You get more respect by being honest, candid and forthright than by overselling, by undercutting your friends and failing to get concrete results and that’s the record of the Obama administration.

Al-Monitor: Would Gov. Romney keep giving aid to the Lebanese army and how would he deal with Muslim Brotherhood governments emerging in countries that have been our close allies in the past?

Williamson: … We should support the Lebanese government. With respect to particulars, I’m afraid it’s beyond my expertise. With respect to working with the Muslim Brotherhood, of course you have to work with the duly elected officials… but also you should recognize that there are various strains in the Muslim Brotherhood... and we should be seeking to work with the more moderate constructive parts of all political parties and movements.

Al-Monitor: Would you include Iran in a contact group on Syria?