Trump Cabinet picks could signal fate of US Mideast policy

The fate of the Iran deal and other pressing foreign policy issues may rest with who Donald Trump chooses to advise him and serve in his Cabinet. 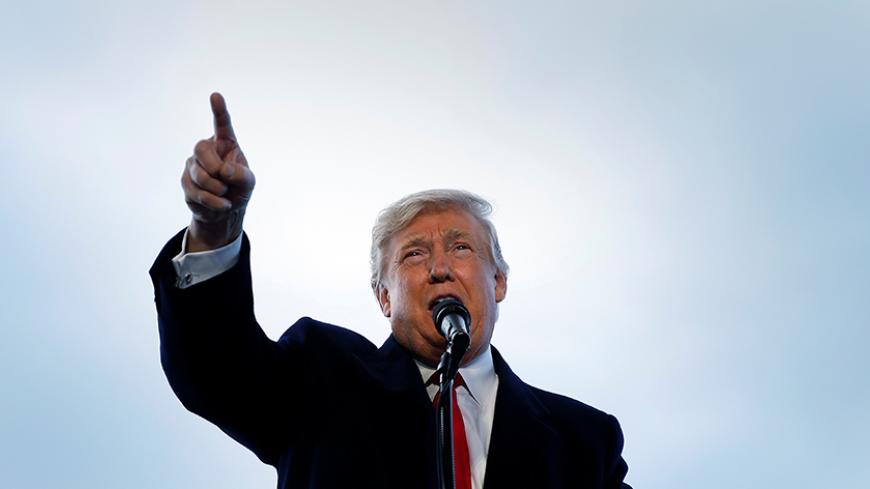 WASHINGTON — The fate of the Iran deal, a resolution to the Syrian civil war and other pressing foreign policy issues may rest with who Donald Trump chooses to advise him and serve in his Cabinet.

While Trump has signaled some continuity with the Obama administration in seeking to cooperate with Russia to combat the Islamic State (IS) and find a solution to the Syrian war, on others his expressed instincts and range of proposed advisers signal a sharp departure, particularly on global climate change. On the Iran nuclear deal, it may particularly depend on who has his ear.

"President-elect Trump is not particularly ideological and that will serve him well," President Barack Obama said at a news conference on Nov. 14 before traveling to Europe and Peru. "I think ultimately he is pragmatic."

“It all comes down to the people, who they are,” a senior US administration official working on Iran told Al-Monitor. “Whoever it is, is going to have a long list of to-dos. Whether they feel like adding one more to the list … I think anybody that comes in is going to be looking at a very long list of foreign policy challenges,” the official added.

The Republican president-elect spoke by phone with Russian President Vladimir Putin Nov. 14. The Kremlin said they talked about joining forces in the fight against the common enemy of international terrorism and a possible resolution of the crisis in Syria.

Trump, on the campaign trail, has frequently expressed the desire to work with Russia to combat IS. And in one of his first interviews after his surprise victory last week, Trump said his major focus would be fighting IS and questioned whether the United States should be backing the rebels fighting the Bashar al-Assad regime.

“I’ve had an opposite view of many people regarding Syria,” Trump told The Wall Street Journal Nov. 11. “My attitude was you’re fighting Syria, Syria is fighting [IS], and you have to get rid of [IS]. Russia is now totally aligned with Syria, and now you have Iran, which is becoming powerful, because of us, is aligned with Syria.”

If the US attacks the Assad regime, “we end up fighting Russia, fighting Syria,” Trump told the paper.

“Trump appears to see the threat of [IS] and Islamist extremism as urgent and the principal current threat to the United States,” former US Ambassador to Iraq and the UN Zalmay Khalilzad, a reported contender for a top national security post, wrote of Trump’s foreign policy in an article last July. “He wants US alliances to focus on the threat of Islamist terrorism and also is willing to cooperate with Russia to defeat it. He is willing to use more US forces and to adopt more aggressive tactics. He appears to favor using a lot of force against terrorist targets in the Middle East but then get out rather than maintain a significant role on the ground for years.”

On the campaign trail, Trump espoused the view that the landmark Iran nuclear agreement reached by Iran, the United States, United Kingdom, France, Germany, China and Russia in July 2015 is a terrible deal and that the Obama administration negotiated poorly. But the real estate developer has also said that he knows from his business experience that it is very hard to rip up a signed contract, and he would instead enforce it very hard.

But in the week since Trump’s surprise election victory, the list of reported contenders for top foreign policy and national security posts in the 45th presidential administration has suggested a wide range of ideological viewpoints, some at odds with Trump’s campaign criticism of the 2003 US invasion of Iraq and its aftermath and his expressed aversion to deep US military entanglements in the Middle East.

“Every bad decision that you could make in the Middle East was made,” Trump told The New York Times in March 2016. “And now if you look at it, if you would go back 15 years ago … if our presidents would have just gone to the beach and enjoyed the ocean and the sun, we would’ve been much better off in the Middle East, than all of this tremendous death, destruction, and you know, monetary loss … we’re far worse off today than we were.”

Among the contenders to be secretary of state, according to The New York Times, are former Bush-era Ambassador to the UN John Bolton, Senate Foreign Relations Committee chairman Bob Corker (R-Tenn.), former House Speaker Newt Gingrich, former US Ambassador to Afghanistan and the UN Zalmay Khalilzad, and former US commander in Afghanistan Stanley McChrystal. Former New York Mayor Rudolph Giuliani is also under consideration for secretary of state, The Wall Street Journal reported Nov. 14, saying that he and Bolton were the leading contenders.

For his part, Gingrich, a top Trump surrogate, told Mother Jones’ David Corn over the weekend that he does not want to be secretary of state and instead prefers to work in the Trump White House on strategic planning.

Among the reported contenders, Bolton would signal fierce opposition to the nuclear deal and a confrontational path with Iran, while Khalilzad and McChrystal would signal pragmatism and potential dialogue with Iran, and Corker some more middle course.

Bolton, writing in the Nov. 14 New York Post, urged Trump to cancel the Iran nuclear deal in his first days in office.

“One key step would be to abrogate the Iran nuclear deal in his first days in office,” Bolton, who did not receive Senate confirmation to be Bush’s ambassador to the UN, wrote. “There will be considerable diplomacy required to explain this courageous but necessary decision, but the unambiguous signal it would send worldwide cannot be underestimated.”

Despite such a hard-line stance seeming at odds with Trump’s expressed suspicion of further Middle East military entanglements, Trump last year cited Bolton as one of the “two or three” figures whose foreign policy counsel he listens to. But some Washington veterans believe Bolton might have a hard time getting confirmed by the Senate, which he did not receive when he was Bush’s nominee to be ambassador to the UN in 2005, even when there was a larger Republican Senate majority than will be coming into office next year.

A former Bush administration State Department official, speaking not for attribution, said it is hard to assess what the decision-making criteria will be for appointments drawing on the campaign’s small inner circle of loyalists. On Nov. 13, Trump named Republican National Committee chair Reince Priebus as his White House chief of staff, and Breitbart executive chairman and his campaign CEO Stephen Bannon as White House chief strategist and senior adviser, sparking controversy because of Breitbart’s association with the “alt-right” movement.

Regarding Corker as a potential secretary of state nominee, “My sense is he is probably confirmable, moderate, a practical guy,” the former Bush administration official said. But noting Corker withdrew from consideration to be Trump’s running mate, “I think there is a question mark there,” he added. “But if Trump is trying to pick someone reassuring within the available options, he might fit the bill.”

Former US Ambassador to Afghanistan and Iraq Khalilzad wrote a sophisticated article last summer on Trump’s foreign policy views, called the “Emerging Trump Doctrine,” a few months after introducing Trump at his first major foreign policy speech at the Center for the National Interest.

“What we are witnessing is nothing less than the birth of a Trump Doctrine, one that calls for a break from the status quo on at least five main issues: US goals, countering the terrorist group [IS] and Islamist extremism, democracy promotion, immigration and great-power relations,” Khalilzad wrote for The National Interest, the Center’s magazine, on whose advisory board he sits.

Khalilzad, a veteran US diplomat of Afghan descent, seemed to be positioning himself for a potential role advising Trump on foreign policy, but a position on the campaign never materialized, the former Bush administration official noted, for reasons he didn’t know.

“If I were them, I would want someone like him, but it is also very difficult to know what the decision-making criteria are. It is extremely difficult to assess,” the former Bush administration official said. “Obviously, it would be huge symbolism, given Khalilzad’s Muslim background, to have him in a senior position. There is a political logic to it, too. It would send a signal that is reassuring, both domestically and abroad, after this campaign, that this administration does not have animus against Muslims.”

Sen. Jeff Sessions, R-Alabama, one of Trump’s first supporters in Congress and an anti-immigration hawk, is also in line for a Cabinet post, possibly as attorney general or secretary of defense or homeland security. Sessions, a former prosecutor, is the No. 3 Republican on the Senate Armed Services Committee and has supported increased spending at the Pentagon. Many people, particularly Democrats, would probably prefer to have Sessions heading the Pentagon than at the Department of Homeland Security or as attorney general, because of his tough anti-immigration stance, the former Bush administration official said.

For the US officials who helped negotiate the Iran deal — the Joint Comprehensive Plan of Action (JCPOA) — and believe it has enhanced US national security and walking away from it would harm US national interests, they are preparing to offer their guidance to their successors and future colleagues, as the case may be.

“I have been thinking about it a lot. I think that what I want to do … is to make the case … of what we are getting out of it,” the US administration official said. “The position we were in prior to the JCPOA, from the perspective of the breakout timeline, and potential for military conflict. And then demonstrate what we are getting out of it at the moment. And what the consequences would be if we walked away.”