US President-elect Donald Trump, in a meeting with The New York Times on Nov. 22, discussed many critical matters in the region, including ending the Syrian war and forging Israeli-Palestinian peace. 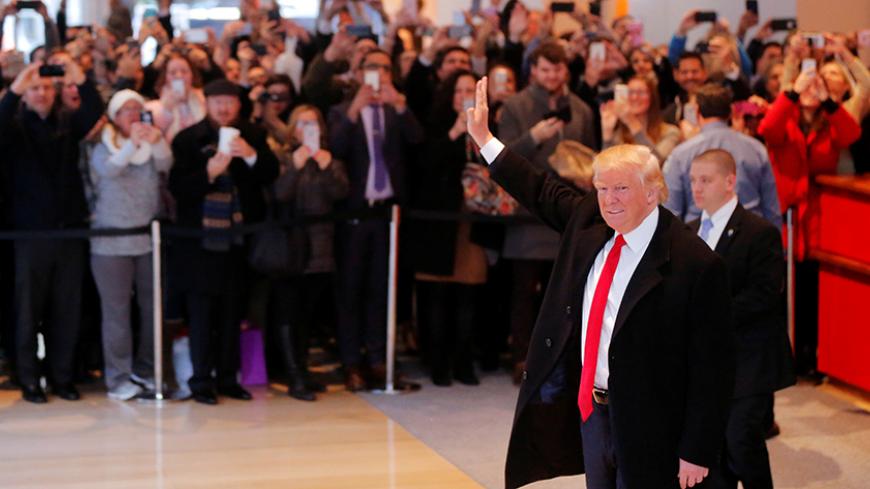 US President-elect Donald Trump waves to a crowd gathered in the lobby of The New York Times building after a meeting in New York, Nov. 22, 2016. - REUTERS/Lucas Jackson

WASHINGTON — President-elect Donald Trump said Nov. 22 that “we have to end” the Syrian war, but he did not think the United States should be involved in nation building. Trump also said that he would love to solve the Israel-Palestine conflict, and thought his son-in-law Jared Kushner could help.

“We have to end that craziness that’s going on in Syria,” Trump said during a 75-minute, on-the-record meeting with reporters and editors at The New York Times headquarters on Nov. 22, according to tweets of the meeting posted by Times staff.

“We have to solve that problem,” Trump said of Syria, adding, however, that he has a “different view than everybody else.”

Gabbard, a member of the House Armed Services Committee and an early supporter of the presidential candidacy of Bernie Sanders, said she urged Trump in their meeting not to pursue a Syria “no-fly zone” or an escalation to overthrow the Assad regime, but to instead focus on fighting the Islamic State (IS) and al-Qaeda.

"President-elect Trump asked me to meet with him about our current policies regarding Syria, our fight against terrorist groups like al-Qaeda and [IS], as well as other foreign policy challenges we face,” Gabbard said in a statement after the meeting.

“I felt it important to take the opportunity to meet with the president-elect now before the drumbeats of war that neocons have been beating drag us into an escalation of the war to overthrow the Syrian government,” Gabbard said.

“I shared with him my grave concerns that escalating the war in Syria by implementing a so-called no-fly/safe zone would be disastrous for the Syrian people, our country and the world,” Gabbard said. “It would lead to more death and suffering, exacerbate the refugee crisis, strengthen [IS] and al-Qaeda, and bring us into a direct conflict with Russia, which could result in a nuclear war.”

They also discussed veterans affairs, Gabbard said, adding, “I saw firsthand the cost of war and the lives lost due to the interventionist warmongering policies our country has pursued for far too long.”

Trump, speaking to The New York Times on Nov. 22, suggested he shared Gabbard’s opposition to US military intervention in wars of choice.

"I don't think we should be a nation builder," Trump said in response to a question from columnist Tom Friedman on what he thought should be the US role in the world.

Regarding possible national security appointments, Trump said he was “seriously considering” nominating James Mattis, a former Marine Corps general and Central Command commander, to be his secretary of defense. Mattis, who was eased out as Centcom commander in 2013, would require a congressional waiver to take the post due to a statute that requires that the secretary of defense be a civilian who has been out of uniform for at least seven years. But John McCain, R-Ariz., the chairman of the Senate Armed Services Committee, indicated he would be highly supportive of the pick. “I am pleased that the president-elect found Gen. Jim Mattis as impressive as I have in the many years I have had the privilege of knowing him," McCain said in a Nov. 21 statement.

Trump told the Times that he asked Mattis in their Nov. 19 meeting what he thought of waterboarding and was surprised to learn that Mattis opposed it, the Times reported.

Trump was less generous about the prospect of bringing into his administration Republican politicians who had criticized his candidacy and character throughout the tumultuous campaign. Outgoing Sen. Kelly Ayotte, R-N.H., who narrowly lost her Senate re-election bid and who has also served as a member of the Armed Services Committee, would “love a job in the administration,” Trump said, but Trump told her “No thank you,” he said.

Trump did speak warmly of one person who had sharply criticized him during the 2016 campaign: the president he will succeed, Barack Obama.

"I had a great meeting with President Obama," Trump said of his Nov. 10 meeting with Obama at the White House. “I really liked him a lot."

“I didn't know if I’d like him,” Trump added about Obama, whom he had not met before. “I probably thought that maybe I wouldn’t, but I did. I really enjoyed him a lot."

“He did tell me what he thought were the biggest problems, in particular one problem," Trump said, but declined to say what that was. A New Yorker report on an off-the-record Nov. 21 meeting between Trump and TV news executives and hosts suggested that problem might be North Korea. “The one topic that seemed to elicit real seriousness from Trump, now that he has been briefed by intelligence officials, attendees said, is the situation in North Korea,” The New Yorker’s David Remnick wrote.

Trump said Nov. 22 that he would love to be the one to solve the Israel-Palestine conflict, but he did not indicate how much of a priority that would be for his administration. Trump suggested that Kushner, the president-elect's 35-year-old son-in-law who played a key role advising Trump on his campaign, would probably not take a formal post in his administration, but could help make peace between the Israelis and the Palestinians.

“I would love to be the one who made peace with Israel and the Palestinians,” Trump said. “That would be such a great achievement.”