As Russia considers expanding in the Iranian and Saudi arms markets, the rest of the world is asking what such moves would mean for Moscow’s foreign policy and security role in the region. 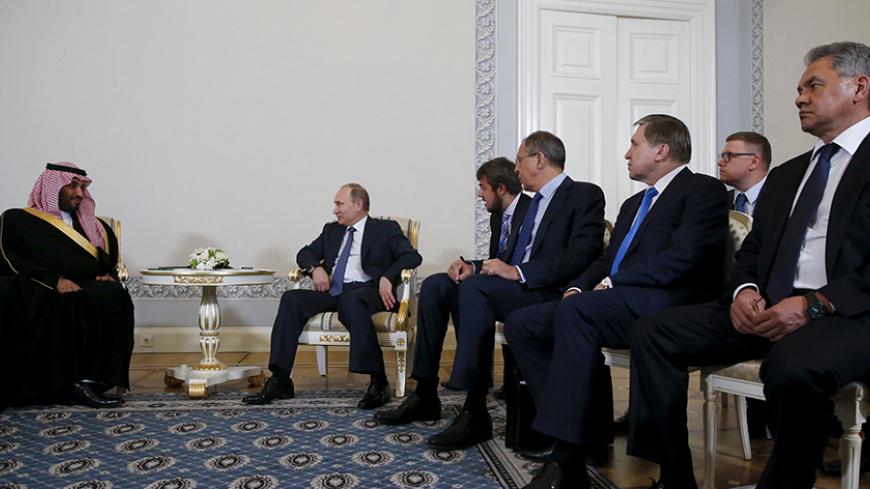 While Washington is concerned about Russia selling missiles to Iran, arguing it would “greatly boost Iran’s air defenses,” Moscow is seriously considering going further in arming the United States' top ally in the region, Saudi Arabia. This possibility raises questions over the role Russia wants to play in the regional security framework in general and how its arms export policy serves its foreign policy in particular.

Historically, Russia (including when it led the Soviet Union) has been one of the world’s largest arms exporters. Today, like any manufacturing industry, arms production has a sound economic significance to the sanctions-crippled Russian economy. The industry is made up of 20 companies, including the air defense giant Almaz-Antey, with a total revenue of $12.25 billion as of 2009. The industry provides about 20% of all manufacturing jobs in the country and employs around 3 million people. In a critical time for the industry, President Vladimir Putin has ensured it is not only export-oriented but serves state defense orders, making it one of the drivers of the Russian economy and a symbol of national pride. As a result, in 2007, Russian defense orders amounted to 302.7 billion rubles ($12.35 billion at the 2007 exchange rate average) — skyrocketing from 62 billion in 2002 ($1.9 billion at that year's exchange rate average).

Nevertheless, the export part has remained a key component for the industry, making it, above all, an important political tool of the Russian state. In 2009, Russia became second to the United States in the financial value of new contracts signed with developing states at $10.4 billion (a double jump from $5.4 billion in 2008). Russia’s only state intermediary agency for the country’s exports and imports of defense-related products — Rosoboronexport — insisted the real sum was $15 billion ($9.4 billion in 2008). But whichever figure is correct, it is symptomatic of two trends: First, it is a record high in Russia’s post-Soviet military history, and second, by the latter part of the first decade of the 21st century, it reached the point where it wouldn’t ease up its production if not for some external factors.

From 2006 to 2009, the Middle East as a region was the largest market for Russian arms. Within that period Russian military suppliers sold 50 supersonic fighter jets, 270 tanks and self-propelled guns, 20 anti-ballistic missiles, 10 helicopters, 10 surface-to-surface missiles and more than 150 armored vehicles. Among various reports, the most controversial and diverging figure was the exact number of surface-to-air missiles, which revolved around 5,500.

In the early 2010s, Russia’s share in global arms exports reached 24%. Moscow tried to expand its market presence and followed the global trend toward increasing arms sales in southeast Asia. According to Russian sources close to government, in 2012 three of five top consumers of its military production were from the region: India (40%), Vietnam (10%) and China (5%). The share of Middle Eastern countries in the global purchases of arms and ammunition amounted to some 6%. However, the high conflict potential of the region and the fast-changing dynamics of the Arab Spring still made it look like a promising market for the industry, cynical as that sounds. Besides, it was deemed a good replacement for the temporary drop in demand in the southeast.

Some, however, expressed legitimate skepticism that Russian arms would not make it far in the Middle Eastern market. Indeed, the Arab uprisings didn’t change much for the exportation of Russian arms to the region in the initial stages, with one serious exception. For five years, from 2007 to 2011, Syria increased arms purchases dramatically by 600% — far more than within the five previous years — with Russia clearly being a top exporter to the country.

But as the share of American military supplies decreased somewhat and ties between Washington and former regional allies grew strained, the Russians saw an opportunity to fill the niches, particularly in Egypt. The revival of robust military cooperation with Cairo since November 2013 was made possible by the Egyptian leadership seeing Russian weaponry as both a critical replacement for American arms and a guarantor of the regime's stability. A somewhat opposite example, one of keeping political dependence out of the weaponry business, is Algeria. This country is one of the biggest customers for Russian arms — about 14% of its total export share — but the bilateral agenda is rather modest. The Algerian government is using every tool it has to keep massive arms deals within business and security-related modes, making them look as depoliticized as possible.

Previously, however, Russia’s unprecedented decision to sell weapons to Bahrain raised suspicions of an encroachment on American interests in the Gulf. But in a recent news bombshell, a possible purchase of Russian weapons by Saudi Arabia was announced. The intention allegedly came about after the meeting Putin and Deputy Crown Prince and Defense Minister Prince Mohammed bin Salman earlier this year. Presented as a done deal in Moscow and understandably assessed as unlikely in the West, it was meant to be a message from the Saudis — currently the world’s largest arms importer — to the United States, from which they buy up to 40% of their weapons. It also could indeed be a breakthrough for Moscow and Riyadh, who have barely talked to each other at high levels for several years. More importantly, the Kremlin is being careful to maintain a balance in its relations with Iran and Saudi Arabia. In this regard, the Saudis' alleged interest in the Iskander-E tactical ballistic missile system and a probable supply of S-300 long-range surface-to-air missile systems to Iran are separate business contracts but are surely reviewed by Moscow as part of the overarching security puzzle in the region.

In this respect, Russian arms supplies may not be the core problem of the security challenges the region faces, but they are a part of the fast-growing arms race that has swept the Middle East. Russia’s bid to increase its arms exports by $50 billion by 2020 is ambitious, and very particular circumstances need to be met for that to happen. While the economic benefits are lucrative and political motives are usually understandable, the reputation costs the industry tends to incur are a price Moscow is unlikely to be willing to pay in shaping its new Mideast strategy.