After decades of disappointment, it appears Russia might finally become an arms supplier to Saudi Arabia, after also reaching deals with Iran and Egypt. 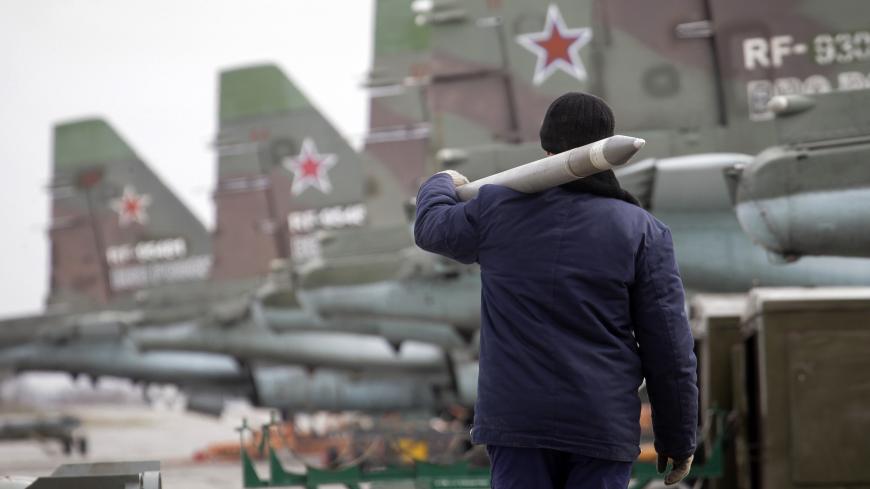 A serviceman carries an air-to-ground missile next to Sukhoi Su-25 jet fighters during a drill in the Russian southern Stavropol region, March 12, 2015. - REUTERS/Eduard Korniyenko

A profound, nearly civilizational rift and continuously escalating strife in the Middle East are prodding Russia to exercise exceptional flexibility as it seeks to hold on to a foundation of friendly relations with key, if not all, regional players that have taken many decades to build. The nature of these relations is determined by historical memories, as Russia had never been a colonial power in the area, and during the Soviet era invariably supported Arab national liberation movements, helped create industrial potential in many nations in the region and backed the Palestinian cause. In more recent years, however, it has had to work to mitigate the fallout of the conflict in Chechnya in the 1990s, as a number of Middle Eastern states sympathized with the separatists, and of its policy stance regarding the ongoing Syrian conflict. With respect to the latter, regional players have been showing signs of better understanding Russia’s position.

In this context, Moscow is striving to further diversify its system of regional partnerships, relying not only on effective tools of diplomacy, but also on military-technical cooperation, an area where it has a thing or two to offer its partners. In this area, more than anywhere else, economic interests — which have grown particularly strong against the backdrop of international sanctions against Russia — are closely intertwined with political interests.

Among the more competitive offerings of the Russian defense industry are air defense systems, particularly the S-300 (S-400, S-500) surface-to-air missiles capable of upgrades. For years, Moscow has been trying to market them in the Middle East only to run up against fierce resistance from strong competitors. Even progress ostensibly made has occasionally been marred by setbacks. Russia has on two occasions had to cancel contracts to supply S-300s in the Middle East. The first occurred when a 2010 deal to provide Syria with four battalions of S-300PMU2s, worth about $1 billion, had to be put on hold for a year in 2013 after Israeli threats against the buyer. The deal eventually had to be canceled altogether. Some of the components of the SAM systems that had already been delivered had to be disposed of in situ, while others were used to meet obligations under other contracts.

The second episode took place in 2010, when a deal with Tehran was canceled following adoption of international sanctions against Iran. Under a 2007 contract, five battalions of S-300PMU1s were to have been delivered. President Dmitry Medvedev’s termination of the deal created unexpected problems. Although Russia returned the $167 million down payment, the Iranians sued in a Geneva arbitration tribunal seeking to recover $4 billion from the supplier, Rosoboronexport.

This year, Russia has taken advantage of various opportunities to revisit the canceled contracts. While there is little chance of renewing the Syrian deal for a number of reasons, including Syria’s financial problems and a real danger of the weapons falling into the hands of terrorists, the Iran situation is different. On April 13, President Vladimir Putin rescinded his predecessor’s order and authorized supplies of the systems to Iran. As a prerequisite for the deal, Moscow demanded that Tehran withdraw its lawsuit. As reported by Kommersant June 22, the contract was amended as follows: serial production of S-300PMU1s having been discontinued, Iran was offered a replacement — the Antey-2500, an upgraded export version of the S-300B ground force air defense system — which the Iranian military accepted. On this occasion, Israel’s protests were ignored, while the United States’ displeasure with Tehran was rather perfunctory, as Washington is keen to cooperate with Iran. Thus, Iran now stands to become the second Middle Eastern country with a Russian SAM system. A contract to deliver two S-300 battalions was signed with Egypt in 2014, with delivery to be completed in 2016.

One extremely enticing prospect for Moscow is to be able to offer this product on the Turkish market. In 2009, a Russian company took part in a $4 billion tender announced by Turkey and fully expected to win it given Ankara and Moscow’s close relations. The Russians instead lost the bid, and not even to strong US or European competitors, but to China’s CPMIC with its FP-200 system, whose HQ-9 model proved to be more competitive than the rivals’ offerings. According to Russian defense experts, the system is nothing more than a clone of the S-300. Ankara later canceled the deal, however, under pressure from NATO.

An even more lucrative potential client for Russia is Saudi Arabia, whose arms market the Russians have long been trying to penetrate, but without success. Riyadh has in the past tried to manipulate Russia’s interest to its own political advantage. In 2005, Saudi representatives began negotiations to buy up to $4 billion worth of Russian weapons, subject to Russia discontinuing arms supplies to Iran. It was later announced, however, that the kingdom had no use for the types of weaponry to be delivered, despite contracts worth tens of billions of dollars for them being concluded with Western countries. When in August 2013, during a confidential visit to Moscow, Bandar bin Sultan, chief of the Saudi intelligence agency, resumed discussion of a potential deal to buy Russian weapons systems, this time worth about $15 billion, provided Moscow withdraw its support for Syrian President Bashar al-Assad and stop blocking UN resolutions against Syria. The offer was taken as a bad joke.

Here, too, the situation may still change for the better. According to media reports, at a June 18 meeting in St. Petersburg between Putin and Mohammed bin Salman, deputy crown prince and defense minister, Moscow was offered contracts to supply the kingdom with Russian T-90 tanks, Iskander missiles, air defense systems and helicopter gunships. Given past events, some Russian experts are skeptical about the prospects of the promised contracts. They believe that the Saudis, extremely upset as they are with US President Barack Obama’s “Iranian nowruz,” are probably just trying to send a warning to Washington but are not actually prepared to cooperate with Russia in the military sphere.

Not everyone, however, shares this skepticism, and official Moscow appears to be quite serious about the potential for developing military-technical cooperation with Riyadh given the changes that have taken place in the region and in the kingdom. Public statements from a number of senior Saudi officials offer some cause for optimism. Thus, Saudi Foreign Minister Adel al-Jubeir said in a Russia Today interview that the two countries’ defense experts were looking into the subject of military contracts with Russia. He added, “I make a point that nothing could prevent us from purchasing Russian defensive weapon systems, just like nothing could prevent Russia from selling them to Saudi Arabia.”

That the Saudi king’s son is visiting Russia to negotiate full-fledged economic cooperation, at a difficult time for the Kremlin to boot, is in and of itself notable. The most spectacular result of the meeting was a framework agreement signed with Rosatom to build a cascade of 16 nuclear power units reported by Argumenty Nedeli to be worth $100 billion dollars.

Russia seems to have learned from its competitors in the West and the East how to effectively court prospective buyers of its defense products, including those who happen to be on the opposite side of conflicts with Moscow. True, as the Middle East continues to climb a spiral of strife and violence, the chances that “these guys will all just get along,” as a popular Russian cartoon says, are dwindling.