Moroccan cartoonists fight for their right to express themselves

It doesn’t seem like Morocco is the perfect place to be for daring caricaturists and satirical writers, but despite restrictions, some are still fighting for freedom of expression. 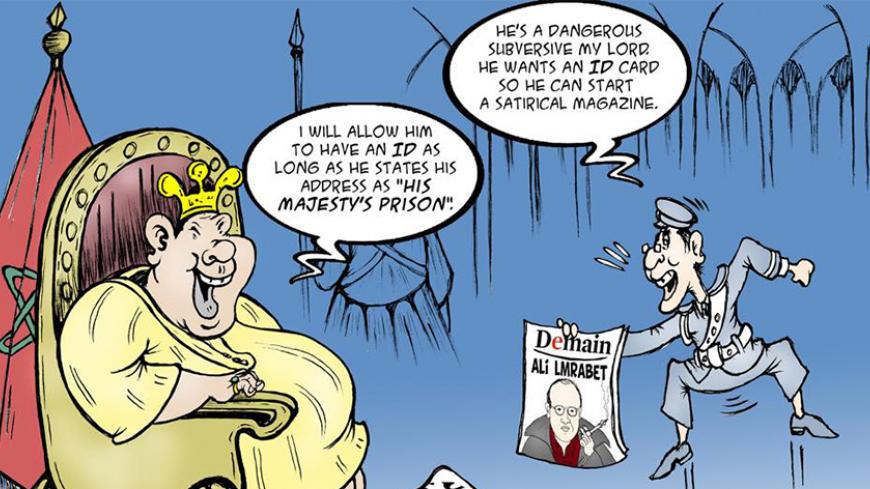 At a time when caricature has become a stand-alone component in major media institutions around the world, caricaturists in Morocco are still struggling to coexist in an environment lacking freedom and fraught with restrictions and red lines that are either imposed by society’s conservative nature or by the political system. Consequently, the freedom of expression and creativity of many Moroccan caricaturists is limited as they find themselves facing increasingly thicker red lines that are related to classic contraband issues such as the monarchy, the Western Sahara issue, religion and sex.

Khalid Gueddar is one of the most talented and daring caricaturists in Morocco. He is known for his bold caricatures that cover all kinds of religious, political and social taboos. He suffered the most from the authorities’ restrictions. In addition to being prosecuted because of the publication of some of his caricatures, there were additional attempts aimed at exploiting other issues [unrelated to his work] to discredit and silence him. Gueddar was sentenced by the Kenitra Court in early July 2015 to three months imprisonment on charges of public intoxication and insulting police officers in a case dating back to summer 2012. Gueddar denied the charges.

Gueddar seems confident that his conviction in court was based on political grounds, as the court’s decision coincided with the announcement of his being friends with satirical artist Bziz, who is banned from publishing caricatures, and left-wing journalist Ali Lmrabet, who went on a hunger strike in Geneva last month because of the Moroccan authorities' refusal to grant him administrative papers to found a satirical magazine. The Moroccan authorities attribute their decision to the fact that Lmrabet does not permanently reside in Morocco, but travels back and forth between Morocco, Spain and Geneva.

Gueddar said, “It does not take great intelligence to realize this. I was sentenced in absentia, and neither I nor my lawyer were notified of the trial date. I have already attended several court sessions, and the case has been postponed several times — and here they are raising the case three years later. They are trying to limit my freedom and stop me from expressing myself, and it is no surprise that they resorted to harassment when we [Gueddar, Lmrabet and Bziz] announced the creation of a satirical magazine, as this campaign coincided with restrictions on my colleague Ali Lmrabet, whom they denied the right to obtain a national identity card,”

He challenged the Moroccan authorities and said he would not appeal the ruling because he does not trust the Moroccan judiciary’s independence from the instructions of the political authorities in Morocco. “The political authority in Morocco dreads cynicism and fears independent press, and this fear is reinforced day by day in the mind of the state. I insist that I’m innocent, and I stand by my convictions. I will always defend freedom of expression, and we will not let go of our next project [the satirical magazine],” Gueddar said to Al-Monitor.

Gueddar had previously faced a four-year prison sentence with a stay of execution in 2010 for his caricature that tackled the wedding of Prince Ismail, a member of the ruling royal family. This led to the shutting down [in 2010] of Akhbar al-Yawm, the newspaper he was working for, but the newspaper was reopened in the same year. Gueddar was one of the first to include Moroccan King Mohammed VI in his caricatures. According to him, there is nothing that’s sacrosanct, and drawing the king is normal even if not commissioned to do so. At the end of the day, he said, caricature is “a means of expression based on criticism and cannot be positive.”

Gueddar has already worked for the two weeklies Doumane and Le Journal, where he had a substantial margin of freedom. He also worked at Al-Akhbar and Al-Masa, where his caricatures were often censored as his audacity reached heights publishers could not match because of the pressure they were put under. This explains why he was repeatedly dismissed from newspapers. Today, he seems more convinced that it is no longer the authorities and their restrictions that frighten him the most, but the publisher who doubles up red lines in a way that resonates with the financial interests of the newspaper.

Gueddar was also among the few Arab caricaturists who worked at the French Charlie Hebdo satirical newspaper. The staff was targeted in January 2015 by a terrorist attack that killed its most prominent caricaturists who had served as an inspiration for Gueddar. With sorrow, Gueddar remembered this incident that claimed the lives of a number of his friends. “I have worked at this newspaper, and it has always embraced journalists and caricaturists who suffer from harassment in their home countries. I've lived enough with its caricaturists to know that they have never been hostile to Islam, but were seeking to break down all religious taboos associated with all religions,” he said.

A lot of Gueddar’s caricatures were subjected to harsh criticism because they brought down religious taboos. He was summoned by the judicial police in 2012 over caricatures that were deemed offensive to Islam, published on the satirical website Baboubi that he had previously launched. The website has been taken down.

The recent hardships that befell Morocco were seemingly not enough for Moroccan caricature to become a worthy journalistic genre. The relationship between caricature and the various actors in the country is still based on misunderstandings and lack of tolerance — especially on the part of political parties that are irritated by caricature.

A yearly meeting of Moroccan caricaturists in the city of Chefchaouen in northern Morocco took place last month during the seventh session of the National Convention for Caricature. The event, which Al-Monitor attended, is a rare meeting that brings together Moroccan caricaturists to talk about their concerns and aspirations. Participants seemed to agree that caricature cannot recover as a cynical journalistic genre amid an environment that lacks freedom. Also, the community continues to suffer from a poor visual culture. The caricaturist Lahcen Bakhti in his speech raised this point during the forum. Bakhti called for the teaching of caricature in Moroccan press institutes as “it would be crazy to ask an ordinary audience to assimilate caricature while journalists themselves don’t understand it.”

While Moroccan Information Minister Mustafa al-Khalfi attended the convention in Chefchaouen, communicated positive signs by confirming that his ministry is convinced satirical cartoons constitute an integral part of the media’s work and called on officials to accept caricatures with an open mind, these statements have yet to materialize.