In an interview with Al-Monitor, Egyptian cartoonist Islam Gawish speaks about his brief detention and vows to continue with his work. 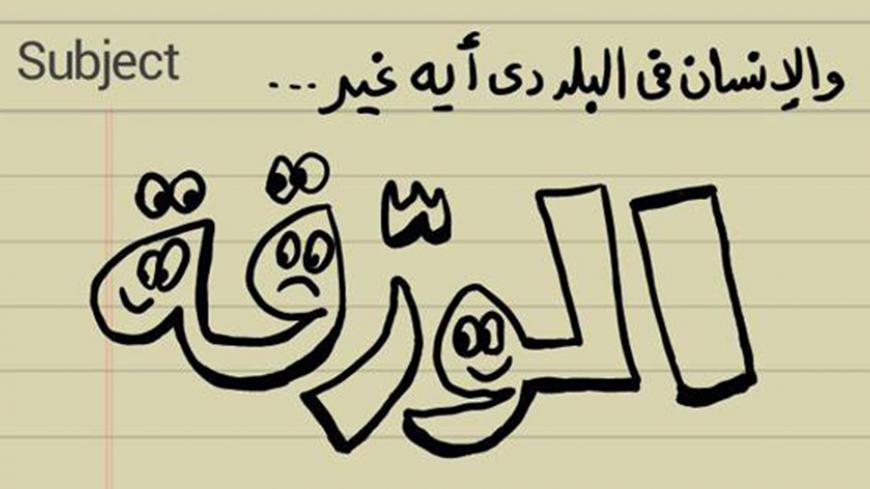 CAIRO — “Managing a Facebook page without a license. That was the accusation they used to detain me,” the Egyptian caricaturist Islam Gawish told Al-Monitor in an interview from the Cairo International Book Fair Feb. 2, a few hours after his release. Gawish was at the fair to launch volume 2 of “Al-Waraqah” (“The Paper”​), a collection of pieces from his Facebook page, also titled Al-Waraqah. The site, with its simple, satirical caricatures lampooning the state of affairs in Egypt, has met with widespread success on social media.

Gawish had been arrested Jan. 31 at his workplace, the offices of the Egypt News Network website, and interrogated about drawing political caricatures targeting symbols of the Egyptian state. After a wave of protests and controversy generated through social media, the Ministry of Interior issued a statement announcing that the charge against Gawish was “managing an electronic website without a license.” Ultimately, however, the authorities released Gawish Feb. 1 without charging him.

Gawish commented, “The ludicrous part is that Facebook pages are not licensed.” He affirmed that he would continue to voice the economic, political and social concerns of Egyptians through satirical caricatures on social media, asserting that his protection was the Egyptian constitution, guaranteeing him unfettered freedom of expression.

A transcript of the interview follows.

Al-Monitor:  Can you provide details about your detention?

Gawish:  I was detained at the police station and was not sure about the nature of the allegations that led to my questioning. Police officers came to the company that I work for, and at first, they asked about people who work there. When I told them that I'm a caricaturist, and after one of them examined the cartoons on my page, they escorted me to the police station, where I was referred to the public prosecutor’s office early the next morning and interrogated.

Al-Monitor:  What do you think was behind your arrest and questioning?

Gawish:  They contended that I drew anti-regime caricatures that mock symbols of the state.

Al-Monitor:  Egyptian authorities stated that you were charged with managing an unlicensed website?

Gawish:  It is not a website, but a Facebook page, to which I ask, Is any Facebook page licensed? I am not a legal expert, but if Facebook pages were in fact licensed, I would gladly apply for a license. But such is not the case, which makes this whole issue utterly laughable.

Al-Monitor:  Tell us about your Al-Waraqah project. How did such a simple idea presented through social media spread so widely and create such controversy?

Gawish:  It is an old and very simple idea, widely used internationally, but not in the Arab world. Al-Waraqah relies on a beautiful, popularly enjoyed drawing style that employs stick figures, not detailed drawings, to convey meaningful ideas. It is through those caricatures that I sarcastically address the social, cultural and political situation in Egypt. Due to its popularity, I decided to publish the first volume of a book of Al-Waraqah-style caricatures, and today we are celebrating the publication of volume two.

Al-Monitor:  Will you continue to forge ahead after your arrest?

Gawish:  Definitely. I will not stop drawing in the style that is so dear to me.

Al-Monitor:  How do you assess the role of political caricaturists in Egypt and the Arab world before and after the Arab Spring? In your view, why are they of such concern to ruling regimes?

Gawish:  Political caricature is currently making great progress, with the emergence of excellent caricaturists who adopt various and well-liked ideas. In the past, 80% of caricaturists were regime cronies who only painted regimes in a good light, with only about 10% of them conveying their and the populace’s concerns in a satirical, caricatural manner.

This latter form of cartoon art now worries leaders because it quickly and simply conveys certain ideas without the need for complicated deciphering. It also can express a variety of meanings, as a single caricature can address more than one issue in a manner readily accessible to the reader.

Al-Monitor:  Have you been offered a position working with any specific publication, whether private or state owned? Why do you prefer to publish on social media?

Gawish:  No, I have not received any such offers, and I prefer social media because it is broader in scope and [content] spreads more easily. Publications would want me to express certain ideas or be biased toward this party or that, but social media is not biased toward anybody, and my ideas quickly reach their intended audience.

Al-Monitor:  How can a caricaturist guarantee that his symbolic message successfully reaches his fans? What should such a caricaturist do to protect himself in light of restrictions on the freedom of expression in many countries?

Gawish:  Besides simplicity, the most important thing is to professionally follow certain guidelines, or what I consider to be rules that a caricaturist must abide by. The art of caricature is satirical in nature, but artists should refrain from utilizing styles or methods that are inappropriate. Caricatures are a form of art that must respect all for it to be respected in return. Any form of caricature that remains objective, does not espouse below-the-belt satirical tactics and is able to convey ideas to the people is, to me, a successful one. On the contrary, even if the idea, expressiveness and caricature is articulate, said caricature, to me, is not a success if it does not abide by professional rules of conduct in conveying its message.

There are no protective measures per se. An artist should not bother himself with protection if he expresses his opinion objectively. I know that the situation differs depending on the country and the regime, but in my opinion, the Egyptian constitution provides for the protection of people’s right of expression and opinion. This provision is all that is needed to protect any caricaturist, including myself, or any citizen who expresses his opinions.

Al-Monitor:  Which of your caricatures have been most successful in conveying an idea to your readers? Also, were there any caricatures with symbolism that proved to be too difficult for readers to easily grasp?

Gawish:  To me, the caricature of the Syrian toddler Aylan Kurdi was my most important, as it also garnered interest in many countries of the world. Conversely, honestly, I do not recall any difficult-to-understand caricatures, as I always endeavor to keep the message simple.

Al-Monitor:  What advice do you have for those wishing to enter the field of political satire?

Gawish:  ​I would advise them to draw and express themselves freely through any avenue, be it traditional paper publications, digital social media or audio-visual. Just give free rein to your imagination and forsake stereotypes on your quest to be different and creative.