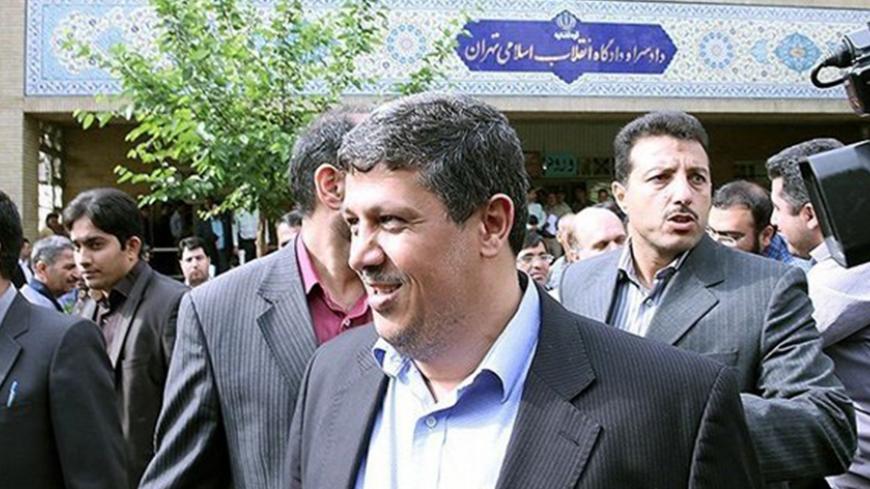 The imprisonment of Mehdi Hashemi Rafsanjani has been like no other corruption case in recent memory in Iran. The media coverage and the social media commentary were a testament to the polarizing position the Rafsanjani family holds in Iranian politics today.

The short video of his saying goodbye to his father, Ayatollah Hashemi Rafsanjani, before leaving for Evin prison went viral on Facebook. The grainy video of the elder statesman in simple white clerical garb praying for his son seemed clearly aimed at garnering sympathy for a family at the receiving end of endless accusations of financial corruption.

Mehdi Rafsanjani arrived at the prison with a number of family members, flanked by reporters, photographers and cameramen. He seemed nonchalant about the circus-like atmosphere around him before he entered one of Iran’s most notorious prisons to serve out a 10-year sentence. When a female associate began to weep, he even smiled to console her.

The fourth child of one of the pillars of the Islamic Republic of Iran, Mehdi Rafsanjani has been the wild card of the Rafsanjani family. And political foes of Hashemi Rafsanjani have not hesitated to use his son’s crimes against the elder statesman who still harbors political ambitions.

On Aug. 11, the front-page of hard-line newspaper Vatan-e-Emrooz showed a picture of Mehdi Rafsanjani before entering Evin with a large red headline: “He deserved it.” The article went into great detail of Mehdi’s corruption and bribery case and the appeals process. The article also rejected claims by Mehdi Rafsanjani that his conviction is related to his father’s announcement that he will run in the Assembly of Experts elections.

Mehdi Rafsanjani’s sister, Faezeh Hashemi Rafsanjani, who served a 6-month prison sentence for protesting the outcome of the 2009 elections, told opposition Kaleme website that their father is being targeted because of the important role he played in the 2013 elections. She added that the current pressure is to decrease the role of Hashemi Rafsanjani in the 2016 future parliamentary and Assembly of Experts elections in order to “engineer” them; the ayatollah was disqualified from running in the 2013 presidential elections, but his support of Hassan Rouhani played a significant factor in those elections.

On his last Facebook post before entering prison, Mehdi Rafsanjani wrote that a family member would continue to update and read his Facebook page and that he would even respond to questions or comments or have family members update his page with his commentary from prison or current events from time to time. Alluding to his father’s time in Evin prison under the previous government of Mohammad Reza Shah Pahlavi, Mehdi Rafsanjani wrote, “Evin prison can one day host the father and another day the son.”

The hard-line Raja News linked Mehdi Rafsanjani’s case to the controversy surrounding Hashemi Rafsanjani’s comments about critics of the Rouhani administration. In response to those criticizing the Rouhani administration, the ayatollah said, “Some were not even around [during the revolution] and were hanging around the streets of their villages, but now they come and have become revolutionaries.” These comments sparked a hashtag “I am a villager” by conservatives. Some shared pictures of villagers kissing their sons goodbye before leaving for the front line in the Iran-Iraq War juxtaposed to the image of Rafsanjani kissing his son before leaving for Evin prison.

The Raja News story was accompanied by a picture of Rafsanjani standing between his daughter and son; all three were smiling. The article said, “Villagers gave their youth and spilled their blood while the princelings ate well at Latyan Dam.” Latyan Dam is an important dam that provides water for Tehran. Many with government connections were able to buy property in the area, making it an exclusive and expensive location.