Peshmerga fighters are committed to fighting the Islamic State, even though their salaries are not enough to make ends meet. 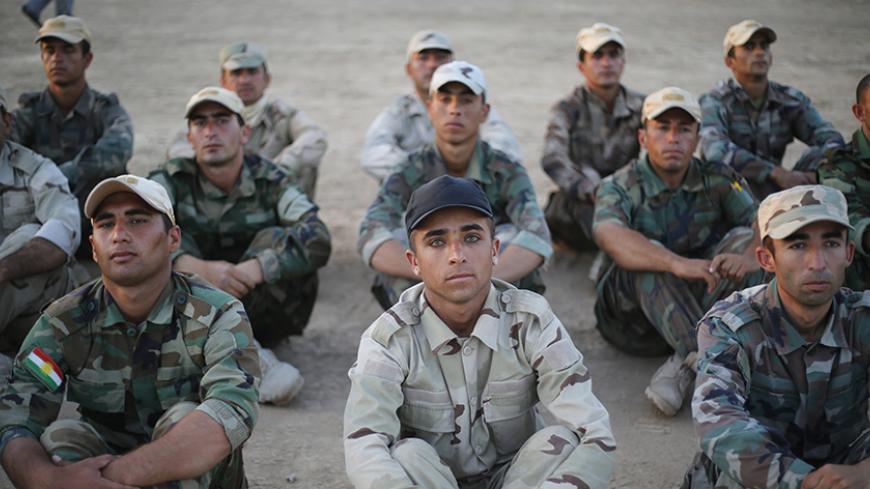 Kurdish peshmerga fighters sit during training, before deploying to fight the Islamic State, at a temporary military camp near the front line in al-Gweir, northern Iraq, Sept. 22, 2014. - REUTERS/Ahmed Jadallah

ERBIL, Iraq — When Hemin Zangana was sent to the front line in August 2014, he and his fellow peshmerga fighters were determined to recapture the Mosul Dam from the Islamic State. They told each other they would rather die during this important mission than accept the fact that IS was in full control after Kurdish forces partially retreated from the area. For several nights, Zangana wasn’t able to sleep properly.

“The peshmerga were weak, too weak. It was the hardest battle I had ever experienced. Yet we were convinced we had what it took to defeat IS,” he told Al-Monitor.

On Aug. 18, 2014, Kurdish peshmerga fighters and Iraqi troops retook Mosul Dam from IS militants. After that, Zangana was sent to al-Gweir, Kabisa and Rabia, where he fulfilled his duty as a peshmerga. In Rabia, a small border town between Iraq and Syria on the road to Mosul, he experienced “the worst of all horrors” during the winter of 2015.

“One night, a young peshmerga fighter went outside to call his family. It was cold and dark outside when I went out to check on him, finding him lying on the ground, covered in blood. I carried him, put him in the car and drove straight to the doctor. With the rain hitting our windows, we couldn’t see anything. On top of that, IS militants started to shoot at us. Luckily, we all survived,” Zangana recalls.

He is now back in his hometown, Erbil, where he works a second job as a driver for expats. He needs this extra work to support his wife and children, because his pay as a peshmerga does not allow him to make ends meet. Zangana is not the only one. Many peshmerga — which literally means "those who confront death" — work second jobs, such as driving cabs or selling goods, in their spare time to supplement an average salary of 500,000 Iraqi dinars ($435) per month, depending on their rank. It is a striking contrast with their reputation as one of the only fighting forces in Iraq capable of taking on IS.

However, Zangana does not always have enough time to work as a driver. In his contract as a peshmerga, it is stated he serve in that role for 15 days, followed by 15 days off. But according to him, these working hours are not always implemented.

"Sometimes [the peshmerga forces] let us stay for 40 days, or even longer. If you are needed at the front line, you stay. It is that simple,’’ he added.

Zangana hasn’t received his salary for the past two months, making it even harder for him to pay the bills, including the rent for his small house in the city of Erbil. Iraqi Kurdistan gained fame in the past decade as a booming region, relatively peaceful, with fast-paced development made possible by oil wealth. Since IS’ invasion in Iraq, however, the economy has slowed and lots of expats have returned to their home countries, making it hard for locals such as Zangana to gain an extra income.

Therefore, his oldest children, both in their early teens, also work after school hours, making between 10,000 ($8.70) to 12,000 dinars ($10) a day. His wife manages all the money that comes in. According to Zangana, she has a “miraculous way of cutting spending.” He spoke of families that have a harder time managing their finances, left unable to pay the rent and other basic expenses.

Falah Mustafa, the foreign minister of the Kurdistan Regional Government, blames the central government for their financial misery. According to him, the Iraqi government in Baghdad had not allotted the finances promised to the KRG after the 2003 invasion for years due to disputes over oil and budgets.

“The peshmerga forces were supposed to be treated as part of the Iraqi national defense system. They should have been equipped, armed and trained. But none of that happened in the last 10 years,’’ Mustafa told Al-Monitor.

He explained that the KRG receives 17% of the country’s share of the budget and oil exports. The peshmerga, as part of the Iraqi military, should have been paid from the national defense budget. However, because Baghdad does not pay them, the KRG is forced to pay the peshmerga from its own budget.

Mustafa added, “As a result of the current situation, we are months behind in payment. We just gave them their salaries for May. And their salary is half of what an Iraqi soldier gets. That’s why we are extra proud of all the peshmerga fighters who defend the KRG with their heart and soul.”

On top of all this, the peshmerga soldiers are poorly equipped, often using old weapons with limited reach. However, due to a strong sense of honor and pride of being part of the peshmerga forces, they endure this situation, even though they have trouble supporting their families.

Some cannot even start a family due to financial problems, such as 30-year-old Seid Bishdar, who has been a peshmerga for over 12 years. Just like Zangana, he has an extra job in his brother’s company, buying and selling land.

“I make too little to ever get married,” he told Al-Monitor. “But being a peshmerga is an honorable job. I am doing this to defend my land, my country and my people.”

Zangana agreed and said that even if he didn’t get paid at all, he would still be a part of the peshmerga forces. According to him, it is the high morale that keeps them going.

"Not only the peshmerga, but all the people in the KRG would do anything to protect the world against IS. I would die for this cause,” Zangana said.