Protests in the southeastern part of the Kurdistan Region over unpaid public sector salaries amid an ongoing budget dispute with Baghdad have led to several deaths. 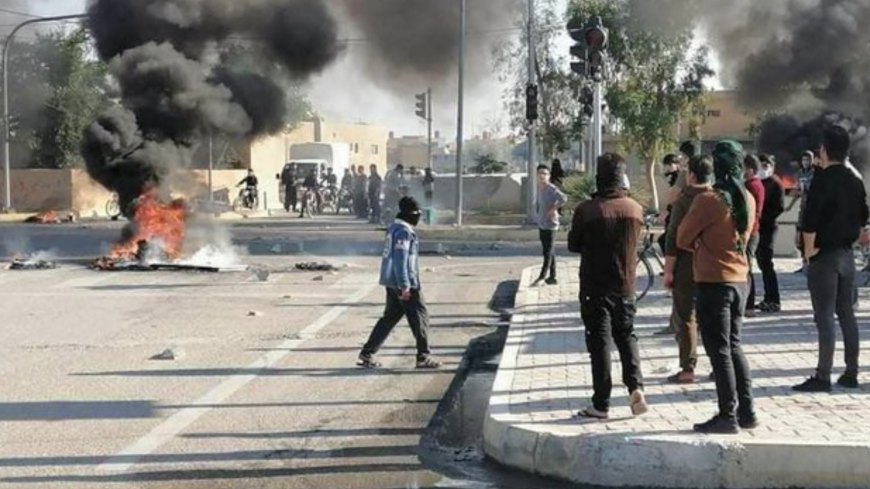 Anger surged despite Kurdistan Regional Government (KRG) appeals for calm ahead of meetings in Baghdad. Civil servants in Iraqi Kurdistan have for years suffered from irregular income due to budget disputes with the central government as well as the fight against the Islamic State (IS), falling oil prices, and — more recently — the coronavirus pandemic.

Photos circulating online showed plumes of black smoke rising from buildings set alight and of women in black weeping after their male relatives were killed, some of whom had allegedly not even taken part in the protests.

The protests almost immediately spread to both the Halabja governorate southeast of Sulaimaniyah near the Kurdistan Region’s border with Iran and the Garmiyan administration further south of it. Halabja had been a district of Sulaimaniyah until 2014.

One member of the security forces and nine protesters had been killed as of the evening of Dec. 10, Ali al-Bayati from Iraq’s Independent High Commission for Human Rights told Al-Monitor.

He said that 58 people including two minors had been injured and that violations by the government and/or forces answering to it included the temporary shutting down of the internet in Sulaimaniyah for several hours, the use of tear gas and live ammunition, and the closing of a media channel. Protesters had set fire to both private and public buildings, he added.

One source in Kalar, the largest town in the Garmiyan administration near the Iranian border, told Al-Monitor that he had not seen such anger before among his friends and acquaintances about the general situation in the Kurdistan Region. He said he had been shocked by some of their reactions to social media posts, including on the beating of an elderly man in Said Sadiq, Halabja, by protesters.

“They were posting it on their Facebook pages as if this were a great achievement,” he said.

Many point to a disconnect between those able to count on regular salaries or investment and homes, and those at the mercy of uncertain wages and the need to provide for their basic needs and those of their families. Concern over both the state of the country’s finances and the ongoing, yearslong disputes with the central government have worn down the patience of many.

Among the public sector employees that have not received several months’ salaries this year are the peshmerga; this fact was stressed by some after one soldier was killed in an attempt to put down the recent protests.

As the United States pulls more troops out of the country, an uncertain future looms heavily.

This journalist spent a few days on the base of the Unit 70 commandos of the peshmerga, which are affiliated with the Patriotic Union of Kurdistan (PUK) in Sulaimaniyah, in late November.

The commander, Akam Omar, said that the unit had been set up during the fight against IS mainly by Sheikh Jaafar Sheikh Mustafa, current KRG vice president.

Omar had been living in the United States after working as an interpreter for the US forces in Iraq. When the fight against IS began in 2014, he decided to return to Iraqi Kurdistan.

Sheikh Jaafar and the PUK are very strong in the southeastern part of the country and are often at odds with the Barzani-led KDP, which enjoys greater support in Erbil and the northern parts of Iraqi Kurdistan than the PUK. Offices of both parties were burned in the recent protests.

Omar noted that initially Unit 70 had welcomed many foreign fighters from Western countries and later went on to receive training from the US Marines and then the Navy SEALs. That support, Omar told Al-Monitor during an interview at the base in Sulaimaniyah Nov. 28, stopped earlier this year.

Contacted subsequently on Dec. 10 for comment on the protests, the commander told Al-Monitor that the commandos had not yet been involved in restoring order to the streets, adding, “We will wait to see, in case things get out of control.”

Emergency response units, the Asayish, police and some peshmerga forces are currently involved, he said, noting that commandos were also suffering from nonpayment of salaries.

One soldier in the unit told Al-Monitor at his base in late November that many peshmerga forces have 10 days on duty and 20 days off, during which they work at second jobs to provide for their families. Common side employment includes working as taxi drivers and running cellphone and repair shops.

During the fight against IS in 2016, Al-Monitor reported on the effects on the peshmerga frontlines in Kirkuk of an economic crisis in the Kurdistan Region sparked by a freeze on the KRG’s share of the federal budget. At that time, Kurdish officials had warned that many peshmerga might desert the forces due to an inability to provide for their families. The peshmerga had in that period blocked roads in Sulaimaniyah for days in protest.

South of Sulaimaniyah in the Garmiyan administration, locals expressed concern to Al-Monitor in September during a visit to the area, where dams were built recently across the border in Iran, of the reduced water supplies to this side of the border that could lead to massive forced migration in the coming years.

According to the Summit Foundation for Refugee and Displaced Affairs, over half a million people have migrated abroad over the past five years from across Iraq, including the Kurdistan Region. The town of Ranya in Sulaimaniyah governorate had at one point seen as many as 800 leave for Europe in a single month earlier this year, according to local media outlets.

If protests continue and more youths lose hope of being able to survive in the region, more may also wish to emigrate any way possible. Or anger may boil over and more seriously damage both the social texture and the internal cohesion of Iraqi Kurdistan.