Peshmerga and other residents of Iraqi Kurdistan are fleeing the region because of frustrations with the government, corruption and the declining standard of living. 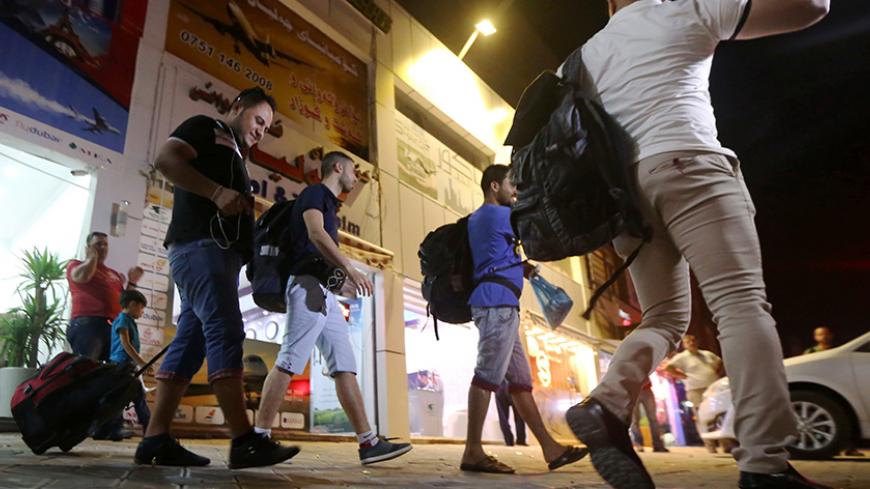 A group of Iraqi Kurds prepare to board a bus bound for Turkey at a bus station in Erbil, the capital of the autonomous Kurdish region, Aug. 13, 2015. - GETTY IMAGES/Safin Hamed

SULAIMANIYAH, Iraq — As thousands of young Kurds put their faith in smugglers, embarking on the perilous journey to Europe, a smaller number are making the return trip in coffins. Bahman Abubakr is still mourning the death of his close friend Saeed Othman and several other acquaintances who suffocated in the back of the now-infamous refrigerated truck discovered along an Austrian highway in late August. Othman’s remains were returned to his hometown of Sulaimaniyah in late September, some two months after he set off for Germany, but his fate has not deterred Abubakr's hopes of making the journey himself. As soon as his father’s health improves, Abubakr says he will join the exodus of thousands of other young Kurdish men who feel they have nothing to lose.

“If they reach Europe, they escape this misery in Kurdistan, and if they die on the way, they will finally find peace,” Abubakr told Al-Monitor. “I am fed up with the leadership here and the corruption that is everywhere.” Living standards in Iraqi Kurdistan have rapidly deteriorated as politicians haggle over power. Basic services and essentials, including electricity, cooking gas and water, are not guaranteed, and corruption permeates the quasi-institutions of the Kurdistan Regional Government (KRG) and society at large.

Youth unemployment stands at 18% in Iraq, with nearly 50% of the population under 19 years of age. The rate is even higher among those with higher education. This poses a serious challenge for the governments in Baghdad and Erbil, and poverty has become a major issue. Seventy-five percent of respondents in a UN survey identified reducing poverty as the “most pressing need.”

The deteriorating situation in Iraqi Kurdistan has led some influential figures to speak out publicly. Adham Barzani, a long-time ally of KRG President Massoud Barzani, broke his silence in a Voice of America interview, complaining about widespread corruption and the monopoly of the political parties. “What political parties are trying to do is to increase their power and influence. … They have forgotten about the pain and suffering of the people,” said Barzani, a figure in Kurdish politics for decades. “I think people have been too patient in putting up with this awful situation.”

There are no precise figures on the number of people who have fled Iraqi Kurdistan, but the United Nations estimates that more than 50,000 have abandoned Iraq over the last three months. More than two dozen people in the Kurdistan Region who spoke with Al-Monitor about emigrating to the West cited the lack of salaries, disputes between Baghdad and Erbil, nonexistent services and pervasive corruption as the main reasons to leave.

Iraqi Kurds have been migrating to the West for several decades, creating a vast diaspora across Europe. The first wave began in 1975, when a Kurdish rebellion against the Iraqi government collapsed. During the 1980s, they fled the oppression of Saddam Hussein’s regime, which razed villages and gassed civilians to crush the armed Kurdish struggle. The following decade saw the largest outflow from the Kurdish area due to internal conflict and international sanctions.

After the 2003 US-led invasion of Iraq and overthrow of Hussein, which many Kurds viewed as their liberation, people continued to leave. The tide began to reverse in 2008, when the region experienced an economic boom fueled by rising oil exports. The bubble began to deflate when the Baghdad government cut funding to the KRG in early 2014 in an ongoing dispute over the Kurds independently exporting oil. A drop in oil prices then compounded Kurdistan’s economic woes, and in August Islamic State (IS) forces attacked its peshmerga, putting the region on a war footing and scaring off foreign investors.

Today, almost everyone in the region of some 5 million residents knows at least four or five people who have left. Many who remain have a fatalistic outlook, believing nothing will change in Iraq or in Kurdistan. Some even wax nostalgic about the days under Hussein.

The low-paid peshmerga are one section of society that has been hit hard by the current situation, with the livelihood threatened by the ongoing dispute between KRG authorities and the Baghdad government. Many peshmerga have been receiving their salaries three to four months late and therefore must support their families by borrowing money from friends and working a second job when they are supposed to be resting on leave.

In the Kirkuk province village of Albo Mohammad, which peshmerga retook from IS in late August, a group of Kurdish fighters told Al-Monitor that their main concern was not the IS militants less than a mile away, but a lack of money. When asked if they wanted to go to Europe, five said yes. “If I could get a hold of $2,500, I would leave today,” said Shalaw, standing beside the wall of a hut with “Islamic State, Caliphate on the way of the Prophet” graffitied in Arabic.

Kaywan is among the peshmerga who have already had enough. He abandoned the front line with IS three weeks ago and is currently in Istanbul, en route to Europe with five other peshmerga. The 29-year-old, who agreed to talk via Facebook on the condition his identity not be revealed, said that he had fought IS militants from Sinjar to Makhmour and Kirkuk.

“I am sick and tired of not being able to make a living,” Kaywan complained. He has more than a decade of experience as a peshmerga and earned 725,000 dinars ($600) a month. “Kurdistan now belongs to the people who drive luxury cars, the sons and daughters of the officials and the rich.” When asked whether he was worried about the dangerous journey, he responded, “I don't care if I die on the way. I want to go to Europe and live like a human being.”

Haval Ali, 43, has been a peshmerga since 1996 and has two children. He is regularly deployed to the front line, but he is struggling on a salary of around $600, which he has not received for three months. Were it not for his young children, he would have left, like four of his friends who are now in Europe and Canada. “The reason for leaving is that one day we have petrol but no electricity, the next we have electricity but no salary,” said Ali. “No matter how hard you try, you can't have a basic standard of living.”

It is unclear how many men have left the peshmerga, which has been fighting IS militants for more than one year now and has emerged as one of the most trusted and effective forces allied with the international coalition.