All Bibi all the time: How Netanyahu looks to find the media spotlight, not solutions

Israeli Prime Minister Benjamin Netanyahu has done nothing to seize the opportunities that he claimed Operation Protective Edge presented to Israel. 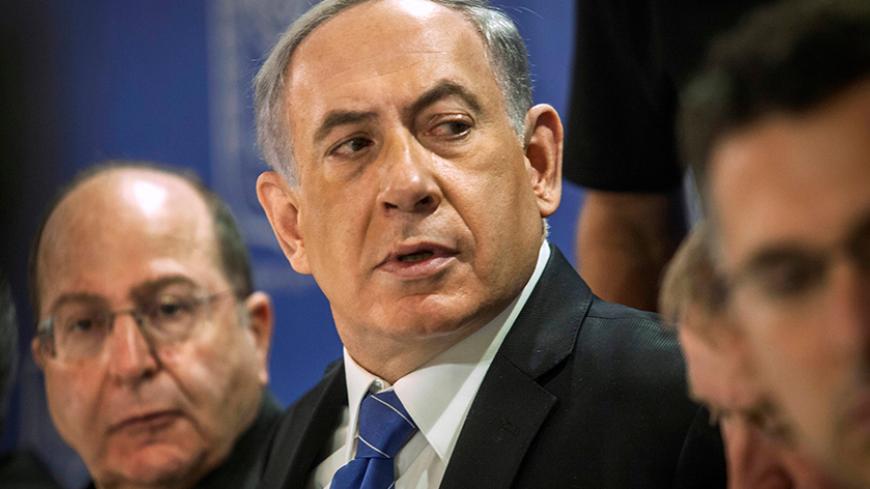 The fascinating battle that Israel has been waging in recent months on Capitol Hill against the Iranian nuclear agreement has overtaken the regional and international agenda in Israel, pushing aside the “boring” confrontation with the Palestinians. An Iranian nuclear bomb and long-range missiles are far more interesting than Hamas' primitive Qassam rockets and a few tunnels. The struggle between a small state's prime minister — singularly facing off the strongest man in the world and five other world powers — captures the audience's imagination to a greater extent than a few reports about a new cease-fire agreement between Israel and Hamas. Even the best show in town, however, must come to an end. It would seem that Israel will not be treated to a happy ending of the “Bibi, Man of La Mancha” show in Washington, with Prime Minister Benjamin Netanyahu in the role of Don Quixote, waging war against the world over the nuclear deal. An accounting on the first anniversary of the cease-fire agreement with Hamas signed on Aug. 26, 2014, suggests Bibi will not be getting an ovation on the local scene, either.

In the absence of popular acclaim after Operation Protective Edge, Netanyahu had to clap his own hands. At a news conference he convened just hours after the cease-fire went into effect on Aug. 27, the prime minister hailed the defeat inflicted by the strongest army in the Middle East on what he himself branded a “terror organization.” Netanyahu went on to present a list of Hamas demands that Israel had rejected: a sea port — didn’t get one; an airport — didn’t get one. The same went for Hamas' demand that Israel release the prisoners freed in the 2011 Gilad Shalit prisoner exchange who had been rearrested and its requests for Qatari or Turkish mediation, rehabilitation of Hamas institutions in the West Bank and money from Israel. A true knockout by Israel. Applause!

But that’s not all. Netanyahu took credit not just for a tactical victory, but for a long-term strategic achievement as well. “We also instilled the understanding that the long-term goal is the demilitarization of Hamas and the terrorist organizations, the demilitarization of the Gaza Strip,” Netanyahu said. Is that so? What do we read and hear about more: the demilitarization of Gaza or its reconstruction? For a few minutes, it seemed as if the prime minister had discerned the link between distress and violence. In his remarks summing up Operation Protective Edge, Netanyahu promised to allow the humanitarian rehabilitation of Gaza. Perhaps he had understood what former Chief of Staff Benny Gantz had said when he warned that war could again erupt if the pendulum were to swing more toward despair than hope.

According to data compiled by the human rights organization Gisha, the Legal Center for Freedom of Movement, despair is getting the better of hope, by far. Gaza's unemployment rate in the second quarter of 2015 stood at 41.5%. From the cease-fire until the end of June, only 6.5% of the needed building materials had entered the Gaza Strip. For the same period, only 4.2% of Gaza's workforce — slightly more than 11,000 people — were employed in construction. According to a newly issued report by the International Crisis Group (ICG), per capita income in Gaza is 31% lower than it was when the Palestinian Authority (PA) entered the territories some 20 years ago.

The authors of the ICG report, who interviewed senior figures in Israel, Doha, Cairo, the international community and Hamas and the PA, reckon that although no one wants another war, the blockade that is causing economic and financial crises — the reason that led to the previous crisis — could result in renewed armed conflict between Israel and Hamas. In addition, the murky relations between Hamas and Fatah, and their lack of ability or will to reconcile, are contributing to the sense among Palestinians that the Gaza Strip is a dead end.

A year ago, Netanyahu boasted to reporters, “We instilled in the international community the fact that Hamas, ISIS [the Islamic State] and al-Qaeda and other extremist Islamic terrorist organizations are members of the same family.” Does Hamas political bureau chief Khaled Meshaal — who recently met in Qatar with former UK Prime Minister Tony Blair, after the latter had met with Netanyahu — head the political bureau of the Islamic State? Could it be that Saudi Arabia, Turkey and Egypt have agreed to reconcile with al-Qaeda?

True, on Aug. 27, 2014, as Netanyahu said, Hamas suffered a blow, whereas Israel enjoyed international consensus. As of Aug. 27, 2015, however, there is not much of that foreign credit left. Netanyahu squandered it and continues to do so. Netanyahu drew a straight line between Israel’s achievements in Operation Protective Edge to “the realignment of regional forces in the Middle East,” but what has been Israel's role in this realignment of regional forces since the campaign?

Netanyahu explained that “regional change of moderate forces in the Middle East is creating a possible diplomatic horizon for the State of Israel” and also “contains within it new possibilities for our country.” What decisions has his government adopted to bring the diplomatic horizon, a place that one never reaches, closer?

He pledged, “We will certainly try to advance these possibilities in a responsible and prudent manner, as we have done up until now.” What has he done over the past year to advance these new possibilities? Issued, “in a responsible manner,” another tender for the construction of a new neighborhood in an isolated settlement? “Prudently” called the weakened Palestinian president, Mahmoud Abbas, to wish him a happy holiday on the occasion of Eid al-Fitr?

The Gaza war, like the discussions over whether to attack Iran, confirm the diagnosis of former Prime Minister and Defense Minister Ehud Barak, according to leaked tapes of Barak discussing past deliberations on Iran, that what interests Netanyahu most is getting his face on the evening news and appearing the following morning in Israel Hayom, the pro-Netanyahu freebie publication. He prefers another temporary cease-fire with Hamas, which refuses to recognize Israel’s right to exist, over a permanent agreement with the Palestine Liberation Organization, which recognizes Israel within its 1967 borders.

Luckily for Netanyahu, the six world powers that acted with determination to end the nuclear crisis with Iran are not lifting a finger to end the occupation crisis. For now.