The female volunteers of the Israeli Machsom Watch activist group are supporting the Dawabsha family while Riham and Ahmad Dawabsha fight for their lives in the hospital, but some of their students are too hurt and angry to continue seeing them. 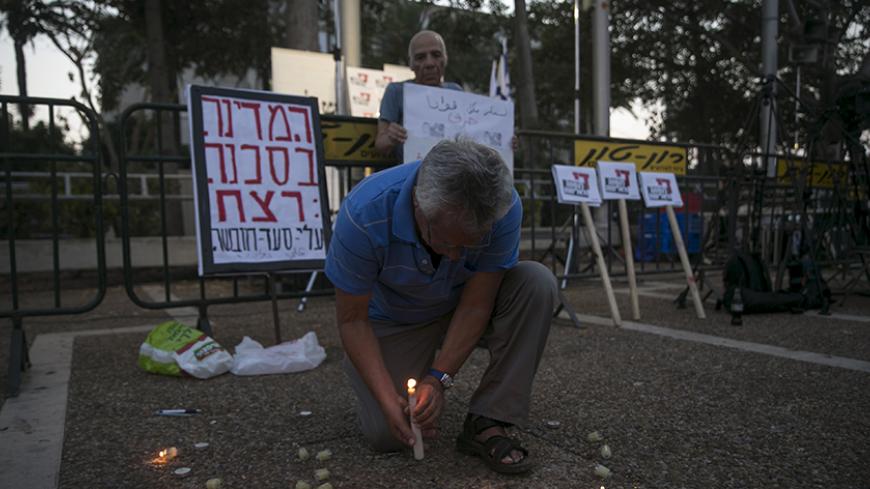 A man lights a candle in memory of 18-month-old Palestinian boy Ali Dawabsha during a protest condemning the July 31 arson attack in the West Bank, at Rabin Square in Tel Aviv, Aug. 1, 2015. - REUTERS/Baz Ratner

This is a story that alternates between despair and hope, one strewn with disappointment. It is also a story of women who tried to establish a bridge of rapprochement, understanding and coexistence, and discovered how brittle and fragile the foundations were.

It began about three years ago with the women of Machsom Watch (Checkpoint Watch), a nongovernmental organization of Israeli women objecting to the movement restrictions imposed on Palestinians by Israel Defense Forces (IDF) checkpoints. The women wanted to deepen their activities within Palestinian villages in Samaria after two large IDF checkpoint crossings, Hawara and Beit Iba, were dismantled. Two veteran members of the organization, Dvora Oreg and Ra’aya Golmov, offered to organize English study groups for female Palestinian residents. Since those classes opened, Israeli-Palestinian relations have known many ups and downs. Every shock wave, such as the Protective Edge campaign in July and August of 2014, put another crack in the bridge they labored so hard to build.

Hadas Carmi is a Machsom Watch activist who used to teach English to a group of girls and young women from the Jorish village. “Girls aged 12 to 26 studied in my group,” Carmi told Al-Monitor. “Teaching with me was a certified English teacher named Shosh Chen. Shosh assembled the lesson plans and I taught English songs. They learned the songs of Paul Simon and Paul McCartney, and mainly they loved John Lennon’s 'Imagine.' By my request, they wrote their own words to the same tune.”

The Israeli Machsom Watch women who taught the Palestinian girls used to stand at IDF checkpoints and document confrontations between Israeli soldiers and Palestinians, settlers and residents of the Samarian villages. A brave friendship evolved between the teachers and their Palestinian students. It seemed to them that the bridge they had constructed, though narrow, was stable and strong. But then came the July 31 terror attack against the Dawabsha family in Douma. Toddler Ali and his father, Saad, were murdered when their house was set on fire, and everything fell apart.

“We came to Jorish to express our condolences and found that the girls were very upset,” said Carmi. “One of the girls, Sirin Ahmed, who is the daughter of the village elder, told us that their math teacher Riham Dawabsha is still fighting for her life. They asked us not to come anymore. 'You are Israelis,' she said. 'True, you are against the occupation, but you are Israelis. Every time I see you, I recall my beloved teacher who is fighting for her life and her family members who were murdered.’ All at once, our bridge had collapsed, after one deed.”

But Carmi did not give up. She went to the Tel HaShomer Hospital ward in which Dawabsh was hospitalized with her son Ahmed. “I met Grandfather Hussein and I told him that I was from Machsom Watch, that I had taught Riham’s pupils and that now I want to keep them company. He became very emotional.”

“I saw a very sad woman,” Hussein Dawabsha told Al-Monitor from Tel HaShomer. “She came to me and said, ‘I want to be with all of you.’ I told her that that is OK. Since then, she and other Machsom Watch women have come to the hospital and remain with us in the ward at least 15 hours a day. Even now there are two women, Raaya and Nurit, from Machsom. They take care of us and give us support and encouragement. God knows how much we need it.”

Carmi explains that in addition to supporting the family in the hospital, she also helps other relatives from Douma who want to visit them in Tel HaShomer. The tasks involved — coordinating with the hospital administration and obtaining travel permits for visitors from the West Bank village — demand daily investments of her time.

“I am their support,” she said. “I took Riham’s sister Maryam under my wing. She is 16 years old and spends all her time in the hospital. Five-year-old Ahmed is wounded and needs her very much. He wants his Aunt Maryam at his side all the time. I call her ‘my daughter, Maryam, Maryam,’ and pamper her. She needs it. In the hours I spend with her, we even started studying English and a bit of Hebrew. Now they call me Hadas Dawabsha.”

“It is a very sensitive subject,” said Hussein Dawabsha. “[The village girls] know that Hadas and the rest of the Machsom Watch women have no connection to the perpetrators of the terror attack on my family. But as far as they are concerned, the Machsom Watch women belong to the group that murdered the family members of their beloved teacher. Therefore, they are no longer able to continue meeting with them as usual.”

Al-Monitor contacted Sirin Ahmed. “Hadas Carmi is one of the women that I love the most,” Sirin said. “She is truly very dear to me. But the decision was not mine alone. We are a group of girls whose teacher is fighting for her life and we simply are incapable of seeing Israelis now. Each time, we built a new bridge and each time, we experienced provocations and violent acts on the part of the Israelis. We held our tongues and continued. Now we have to calm down. The Israelis have to show us that at least they will arrest the murderers and punish them for such a despicable act.

“I know that Hadas and the Machsom Watch women are in the hospital next to our teacher’s hospital bed all the time. I know that they are good women and very dear to me, especially Hadas. Maybe we’ll go back to getting together, sometime. Let us pray that our teacher recovers.”

“We must not give up,” Oreg told Al-Monitor. “True, the situation is difficult, but what worries me most of all is that Israelis in general don’t want to know, don’t want to hear about what is happening behind the checkpoints. In spite of all the disappointments, we won’t give up. Yes, it’s unfortunate that we are only a drop in the sea. But as someone already told me, we are actually not a drop in the sea, but rather a sea of hope.”