The Israeli women of Machsom Watch mediate between Palestinians traveling through checkpoints and the Israeli soldiers who operate them. 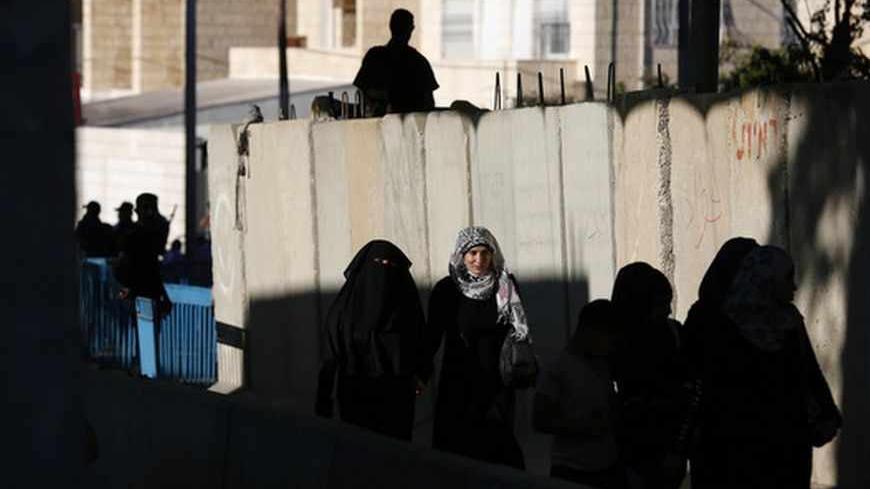 Palestinian women cross at an Israeli checkpoint in the West Bank town of Bethlehem, during the holy month of Ramadan, July 26, 2013. - REUTERS/Baz Ratner

The members of Israeli women's group Machsom Watch (Checkpoint Watch) are ladies with a reputation. Every morning by the crack of dawn, these mostly retired grandmothers travel to the epicenter of the daily conflict between the Israelis and the Palestinians. Their stated purpose is to monitor checkpoints scattered between Israel and the West Bank and within the West Bank itself, but their role is far from that of a silent observer. Today, the women tackle some of the most sensitive challenges faced by the Palestinians and Israeli soldiers. This has earned them mixed accolades — including praise not only from the Palestinians but also from the highest echelons of the Israeli defense and military establishments. Meanwhile, others have criticized them for well over a decade.

It is 2 a.m. when some of the activists set off for their shifts. Throughout the early hours, they are in regular contact with the Israeli Defense Forces (IDF) and the Ministry of Defense’s Coordinator of Government Activities in the Territories unit (COGAT). Often, they assist Palestinians in need of urgent medical help who may be caught up in bureaucratic entanglements or misunderstandings. The women also compile daily reports on any conflicts arising between the soldiers and the Palestinians.

“When we were about to leave, at 7, an elderly woman came up to us and nervously asked for our help,” notes one of the activists in a report of her shift at the Qalandia crossing in early August. “She had an invitation for an appointment at Hadassah Hospital, but had left her permit at home. We asked the DCO (District Coordination Officer) who was present to clarify her status on the computer and to let her pass without the physical permit in hand. He took her identity number, immediately found out in a telephone call that the DCO had given her a permit and left her in the hands of a young soldier who escorted her to the inspection area to make sure that she got through successfully.”

“Arriving at the [checkpoint] at 4, we found a very long queue progressing slowly,” writes another activist. “We waited to see if the situation would be altered but when nothing happened, we started a round of telephone calls. Indeed, after a while another post was opened up, and a "humanitarian" passage was opened up for women and children. A checking-post bypass was also opened up and was operating most of the time we were there. The pressure on the turnstiles eased and the passage ran well.”

The head of COGAT’s health department, Dalia Bassad, says that Machsom Watch “is the most helpful organization I work with.”

“Sometimes, people don’t know the correct procedure for obtaining a permit. For example, sometimes people come though and there are some misunderstandings and questions. Sometimes there are mistakes in their applications.” She describes the activists as "middle-women between us and the Palestinians.”

Among some of the West Bank Palestinians they help, the women have been nicknamed “princesses.” Omar, a resident of Qalqiliya who runs a plant shop, told a visiting group on a recent Machsom Watch tour:  “What they do at the checkpoints is very important to us, the Palestinians. It changes lots of things, both in our hearts and our minds about the Israelis.”

Many of the women are older than the state of Israel itself. Hanna Barag, in her 80s, is one of Machsom Watch’s key activists. This neat, seemingly demure lady will surprise you with her powerful voice, which echoes in her German Colony house when she discusses her experiences in the West Bank. When she first visited the Qalandia checkpoint in 2000, she suffered what she now describes as “a tremendous shock.”

“Qalandia was quite different from what it is today. … It was much worse then, and there was a lot hustle around, and cars, and people screaming.”

The effect was so deep that the next week, Barag pretended to be sick instead of going back. She relates, “The lady from the organization phoned me and said, ‘I know you are not sick. You couldn’t take it. We will help you.’ And that’s how it started.” Today, 12 years on, she describes her role as a kind of a "diplomat" for the organization, liaising between the Palestinians and the IDF. She also helps Palestinians who need to access medical services in Israel.

Barag worked for David Ben-Gurion — Israel’s first prime minister — as his secretary when she was in her early 20s. This, alongside her military service experience of working for the IDF’s chief of staff, is what gave her an initial foothold to set up a dialogue with the army.

“I realized I have an opening — and we needed it,” she says, but the effects were not immediate.

“It took us 10 years to have the first feeling in a big way that someone was listening,” explains Barag. The change came several years ago when, after many years of complaints from Machsom Watch and other organizations and human rights activists, the army changed the conditions in Qalandia, the largest crossing in the Jerusalem area. According to data from the Association for Civil Rights, in 2009 some 20,000 people passed through the crossing on a daily basis.

“The [IDF] changed and extended the opening times, and they opened all the stations, and they made changes in who is able to cross, with which IDs. And suddenly, you come there and people don’t wait for six hours like they used to,” says Barag, noting that many problems still remain. “The IDF officers phoned us after it happened and told us that we had a big share in all of this. So one morning … it was possible. But why wasn’t it possible in the 10 previous years?”

The group has come under criticism over the years from others in Israel who feel that its work is politically biased and ultimately detrimental to Israel’s image. Gerald Steinberg, director of NGO Monitor, a right-wing charity watchdog, calls Machsom Watch a “lobby group.”

“Their objective is to change Israeli policy in the West Bank,” he says. “They want Israel to adopt the policy of unilateral withdrawal from the territories.”

Barag is quick to agree. “I must say that mine is a disturbing position. I often feel that what I am doing is bettering this occupation, which in reality I came here to finish, and to demonstrate against it. And I think we are treading on a very, very thin line there, between bettering the occupation and fighting it.”

Another recent controversy erupted in the aftermath of the murder of an Israeli settler family of five by Palestinians in the village of Itamar in 2011. Israeli tabloids splashed images of a Machsom Watch activist comforting the mother of the Palestinian killers. According to Barag, the activist involved was not aware that this was the mother of the men charged with the murder.

“We didn’t know that those are the sons of these women. But do you know how many people get killed every month, which are never mentioned in the papers because they’re Palestinians? So the answer is to stop killing on both sides.”

“You know,” she says, pausing to reflect, “once I went to a meeting with some of the highest commanders in the West Bank — and the most senior officer turned around to me and said ‘Hanna, you seem to know the West Bank better than me.’ And I said, 'Yes, I do. Because I go there in my own car, with my friend or alone, and I talk to the people and I go into their villages and I stand with them at the checkpoints. I go to their homes, I drink coffee with them and I know who they are. I see how they live. And I know that they are people like me — they want to live.'”