Israeli women, Orthodox and secular, are engaging in campaigns for the upcoming municipal elections in Jerusalem, against the backdrop of judicial battles of women's exclusion from the public sphere. 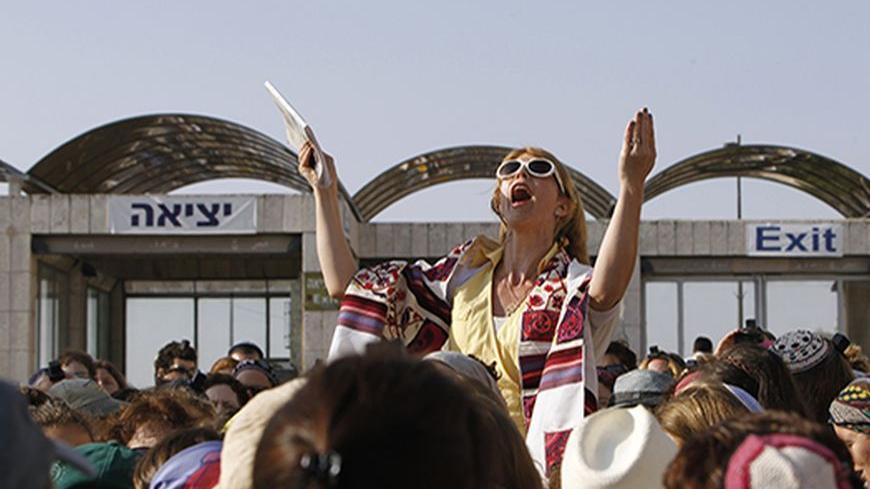 A Jewish activist, a member of the Women of the Wall group, prays at a spot a short distance from Western Wall plaza during a monthly prayer session in Jerusalem's Old City, July 8, 2013. - REUTERS/Ammar Awad

It is hard to imagine Queens Melisende and Sybilla, ancient rulers of Jerusalem, being impressed with the political obstacles faced by women in the city today. Yet, as the municipal election campaigns gather pace, they have placed a spotlight on the rights of the city's females. While Melisende successfully fought her jealous husband in an all-out war in the 12th century, achieving not only a peace agreement but access to her kingdom’s innermost councils, and as Sybilla personally led the (ultimately unsuccessful) defense effort against the advances of Saladin himself, the bar for the power vested with Jerusalemite women today is considerably lower.

Israel is without a doubt a relatively positive model for women’s rights by global — and certainly regional — standards. While Switzerland did not allow women the right to vote until 1971, Israel already had a female prime minister two years earlier. Men and women serve in the army, fly military airplanes, lead political parties and work in a variety of positions. Yet, in the region’s most important city of Jerusalem, Jewish, Christian and Muslim females continue to be sidelined.

There has been a “tsunami of segregation of women and disappearance of women from the public sphere,” which has gained speed in the past few years, said Rachel Azaria, a Jerusalem city council member and founder of the Yerushalmim political faction. “Suddenly, everything we had accomplished over the past 100 years or so wasn’t obvious anymore — it wasn’t obvious that women could sing, could sit anywhere they liked, could work anywhere they wanted to,” she noted.

Although Jerusalem is a modern city overall — welcoming tourists, pilgrims and politicians — some neighborhoods have become increasingly radical in their treatment of women. Some of the battles waged — and won — at the Supreme Court in recent years have included gaining the "right" for a woman’s face to appear on a bus advertisement, and for women not to be forcibly relegated to the back of the bus to separate them from their religious male counterparts. There are reports of "chastity squads" occasionally sighted in Jerusalem’s bars, trying to encourage young women to turn to God and dress modestly, while only a minority of Arab and ultra-Orthodox women in Jerusalem have paid employment. At the local political level, there are only six women on Jerusalem’s 31-member City Council, not one of them a Palestinian from east Jerusalem, a Muslim or an ultra-orthodox Jew.

Elsewhere in Israel, the issues of women’s rights and representations vary widely. In secular, modern Tel Aviv, the issue of female representation simply does not feature prominently in local elections — which focus on the issues of rising costs of living — while in the Israeli-Arab city of Nazareth Knesset member Haneen Zoabi is the first Arab woman ever to run for the position of mayor. Al-Monitor columnist Mazal Mualem noted that in the municipal elections, “if only a quarter of the [female] contestants for the various positions are elected, the results would still be considered a real revolution regarding the representation of women in local politics that is currently controlled by men.”

Having spearheaded — and won — many of the Supreme Court victories, supported by many secular, Orthodox and even some ultra-Orthodox residents, Azaria said that appealing to the legal system is good, but not enough. Many others agree. “There is something wrong with the system, and we need a game changer,” said Naomi Tsur, the secular deputy mayor of Jerusalem. “Game changing means you have to get right out of the box, change the parameters of the game. It’s not enough to appeal to the High Court not to be forced to sit on the back of the bus. Women need 50% representation in leadership positions throughout society — there’s no doubt about that,” she said.

Tsur does not mince her words. Her new party, Ometz Lev ("Braveness of the Heart"), is the city’s first political party led primarily by women, with females in eight of the 10 top spots. Among the key candidates is an ultra-orthodox woman — the first time a female from that community has ever held such a position. The list also includes a naturalized Israeli activist, “who walked all the way from Ethiopia to Jerusalem,” and prominent female Rabbi Susan Silverman, one of the key activists behind the Women of the Wall movement (and cousin of popular US comedian Sarah Silverman).

East Jerusalem Palestinians — who make up approximately 38% of the city’s population — have always boycotted the municipal elections for political reasons, but there are rumblings of change there, too. Tsur’s list also originally included two Palestinian women, but both candidates pulled out due to pressure from their communities. “I believe that next time round, these young Arab women and the groups that they work with will join us,” said Tsur, stressing that she was not establishing a political party but rather “a movement of solidarity for Jerusalem."

“The main problem I think is that each sector is so busy guarding itself off from the others. … This is the next challenge,” she added.

Both of the women-led parties are set to lead a strong role in municipal politics after the elections. Tsur is set to win at least four seats in the upcoming elections, but she is hoping for more. “With growing local enthusiasm and nationwide backing, we are ready to surprise,” she told Israeli daily Jerusalem Post. Azaria’s Yerushalmim is set to win a minimum of two seats, with more expected if voter turnout increases from previous years.

Other women forced to pull out from the municipal elections come from some of the city’s ultra-orthodox neighborhoods. Racheli Ibenboim is originally from Mea Shearim, one of Jerusalem’s most extreme ultra-orthodox areas. In recent years, locals there have been erecting 2-meter-high cloth-covered barriers to divide men from women on stretches of road, to prevent intermingling during the busy Sukkot Jewish holiday festivities. Despite being offered the third-highest place on the HaBayit HaYehudi Party’s list — which would have made her the first ultra-Orthodox woman to ever assume such a position — Ibenboim was forced to withdraw her candidacy after the community blackmailed not only her but also her children and husband.

But Ibenboim is far from downhearted about her situation. “At the same time, I got so much support from the community for what I was trying to do. I am determined to create a change for my community from within,” she said.

Today, she is advocating for quality employment for ultra-Orthodox women as well as setting up women’s circles to bring about broader changes in the community.

“I believe that there will be a change within the ultra-Orthodox community,” added Ibenboim. “But the voices from outside the community are no less important,” she concluded, casting a smile to Azaria and Tsur, who were both sitting nearby.