In an interview, Knesset member Yifat Kariv assures Al-Monitor that she will not give up on advancing women, particularly the ultra-Orthodox, in the Israeli political arena. 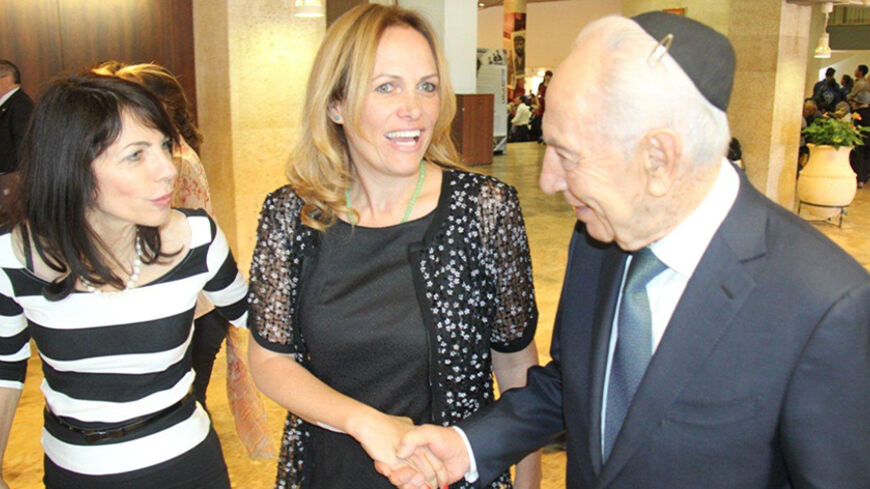 To promote her proposed legislation to increase the number of women members of local and municipal councils, Knesset member Yifat Kariv of the Yesh Atid party asked to meet with her colleague, Knesset member Moshe Gafni of Yahadut HaTorah. In recent years, Gafni and his friends in the ultra-Orthodox parties have derailed all legislation that proposed affirmative action and punitive budgetary sanctions promoting adequate representation of women in local and national politics.

The bill that Kariv presented to Gafni, one of the most sophisticated members of the Knesset, would award any local faction that has at least a one-third female membership a funding bonus of 15%. “Many ultra-Orthodox women come to me asking to help them go into politics. They want to be elected but cannot be,” she told Gafni to soften his expected objections. She also told him she was not asking that he support her, only that he not interfere with the legislative process.

Gafni’s response was sharp and unambiguous. “Knesset member Kariv,” he said, “this will not happen. There will be no ultra-Orthodox women in Israeli politics.”

Kariv was first elected to the Knesset in the most recent elections in 2013, which could explain the political naiveté of her appeal to Gafni. Finance Minister Yair Lapid, the chairman of Kariv’s party is, for Gafni and the other ultra-Orthodox Knesset members, the most hated figure in politics. Lapid is also the source of most of the troubles that have beset the public that Gafni represents, from the law that mandates military service for the ultra-Orthodox to efforts to slash government funding for religious colleges.

In the meantime, even from the back benches of the opposition, Gafni manages to wield power. It is not clear exactly how, but debate on Kariv’s proposed bill, which was already approved in a preliminary Knesset reading earlier this year, has been postponed again and again for unknown reasons.

Kariv says the delays are being orchestrated by the ultra-Orthodox, who exclude women from their parties and would therefore not be eligible for the funding increases provided by the law. In an interview with Al-Monitor, she described the gender wars and inequality in Israeli politics:

Al-Monitor:  It seems that you don’t stand a chance of pushing through this bill. The ultra-Orthodox have managed to derail it despite the widespread support it enjoys in the Knesset.

Kariv:  I believe that I’ll eventually succeed. I don’t intend to give up, even though I found out last week that once again the bill will not be brought up for a vote. It’s scheduled for next week and we’ll see what happens. I know others have tried to enact such a law in several different variations over the past decade and have failed. I will succeed. As far as I’m concerned, the advancement of women in politics is a paramount goal. I know all the Knesset factions on the right and the left, including the Arab ones, want to see more women in politics, so there’s no reason for it not to happen.

Al-Monitor:  Except for the ultra-Orthodox, and that seems like a good enough reason.

Kariv:  It’s certainly a difficulty. But I am not deterred. I admit that I was quite astounded at what Gafni told me. It’s a very backward and primitive thing to say. What does it mean, "There won’t be ultra-Orthodox women in politics?" Why does he think he has the right to block all these amazing, educated, bright women who want to take part in public life and to wield influence?

Al-Monitor:  The problem of women’s representation in Israeli politics is much broader. There’s a problem within the secular parties, as well.

Kariv:  Certainly. The most serious problem is in the local councils. I am very familiar with this because I hail from there. I was a social worker and I thought that I wanted to influence my life and those of children in my family through political involvement in the local council of the town of Hod Hasharon, where I live. It wasn’t easy. I put together an independent list and got two seats on the city council in local elections. I was active on issues that until then were not familiar to local authorities: the status of women and education, [and] including a campaign to install shaded areas in public parks and transportation for the elderly. As a mother, I knew this problem. Usually, the discourse in the local councils is male: Where do we build another tower?

I was teased, but I didn’t give in. In my view, these issues are the most important in community life. Through my work on the municipal council, I understood that women have to be a lot more dominant because this is an arena they can influence for the better.

But the reality is tough: Only 10% of the local council members are women, and out of 257 mayors, only seven are women. It’s unbelievable, because when women do finally make it, they’re the best.

Take Yael German, for example. The minister of health. She was an excellent mayor of the town of Herzliya. And Miriam Fireberg in Netanya runs the city with an iron hand. It’s no coincidence that the suspicions and corruption scandals in local government are linked to men, to mayors. It has to do with their excessive involvement with construction projects.

Al-Monitor:  The current Knesset has the largest number of women in its history. Do you sense female solidarity in the promotion of this legislation?

Kariv:  There are four women members of the Ministerial Committee on Legislation: Tzipi Livni, Yael German, Limor Livnat and Sofa Landver, and this makes us feel that we have backing. It’s true that more than 20% of the Knesset members are women, but we could have had more. I find it disturbing that in Tzipi Livni’s Knesset faction she is the only woman. That’s something that’s hard to explain. She of all people should have seen to it. Yair Lapid is a good example. In addition to the high number of Knesset members compared to all the other parties, he has surrounded himself with women in all the top jobs at the Ministry of Finance.

We women in the Knesset have a WhatsApp group, an initiative by Knesset member Merav Michaeli, and we talk among ourselves all the time. Anyone who has a proposed bill connected to our mutual interests mobilizes support and reminds the group members to come and vote. This includes women from all the parties and provides a sense of power. There’s a strong group of women Knesset members, many of them freshwomen, and the sense is that we came to work. I see women with a spark in their eyes. There’s a group that has come to work and to change things. There are very good energies here.

Al-Monitor:  And yet, things are far from optimal. Ours is male politics.

Kariv:  That’s true. I just successfully ended a campaign for the right to become a member of the Foreign Affairs and Defense Committee. There are 31 committee members, of whom seven are women, and only one — Miri Regev [of the Likud] — is a permanent member. All the others are substitutes. It was important for me to get to this committee to promote issues related to welfare and budget, not the usual things connected with defense. I had a sense that this was being greeted with raised eyebrows: Why would I, a social worker by training, take the place of a committee member, perhaps of some general? And I was only a lowly teacher in the army.

I intend to be influential on the committee. I’m interested in the issue of the [extreme right settler group] Hilltop Youth: Is that a defense-related debate or an education-related one? Perhaps if we invest in their education, they wouldn’t have to become a security problem.

Even before I got to the committee, I found out that there was not a single woman on the defense budget subcommittee. I embarked on a campaign and eventually Knesset speaker Yuli Edelstein stopped the discussion and Knesset member Zehava Gal-On was appointed. I intend to represent the mothers of the soldiers and of the youth on the committee.

Al-Monitor:  What bill are you most proud of?

Kariv:  That’s a tough question. If I have to choose one, then the first bill I introduced in the Knesset, called the ''video clips law'' or the “WhatsApp law.” It reads that distributing degrading photos of a sexual nature on social media will be considered sexual harassment. The law made waves throughout the world. Foreign parliaments wanted to study it and it has been added to the compilation of UN human rights legislation.