Thousands of Palestinians are using Facebook to share traffic updates to help each other avoid spending hours every day waiting to drive through Israeli checkpoints. 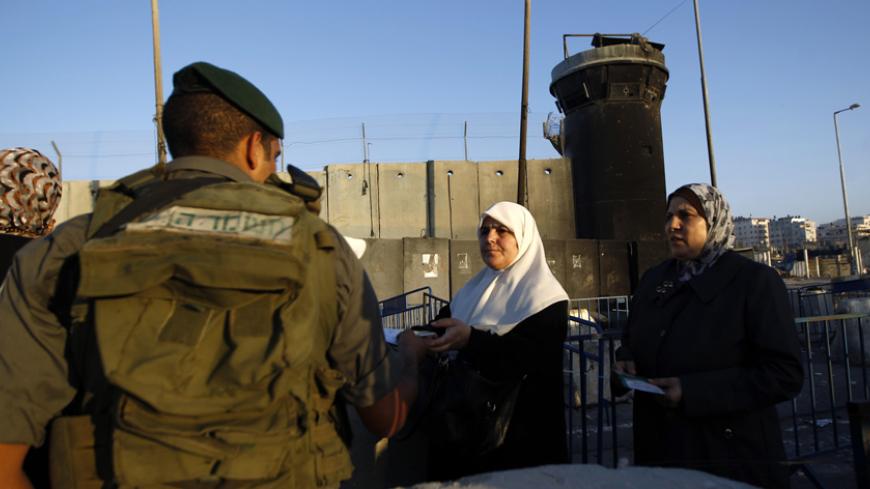 Palestinian women present their identity cards to an Israeli border police officer as they wait to make their way to Jerusalem at the Qalandia checkpoint near the West Bank city of Ramallah, July 4, 2014. - REUTERS/Mohamad Torokman

The first thing that Tanya George does when she wakes up in her Ramallah home is to check the Facebook group “Status of the Road, Qalandia and Hizma.” She scrolls to the latest entry checks and reads the status of Palestine’s worst checkpoint. If it is crowded, she would take the longer road to her job in East Jerusalem, where she works to support underprivileged students, rather than risk waiting in line for hours, or might decide to do some work at home and leave for the office later.

For most Palestinians, the Qalandia checkpoint is the nearest crossing point from downtown Ramallah to downtown East Jerusalem. Individuals working for international organizations can use a special checkpoint north of al-Bireh, referred to as the DCO checkpoint. A third option is the Hizma checkpoint. The last two are farther away than Qalandia, but faster to get through if Qalandia is backed up. Qalandia also connects Ramallah to Bethlehem via the alternative Wadi al-Nar Road.

The Facebook group monitoring the crossings was started by Richard Khoury, a Palestinian who works for the International Committee of the Red Cross. In an interview with Al-Monitor, Khoury explained how the group was established. “My wife and I live in the Jerusalem neighborhood of Beit Hanina, and on weekends we normally go to Ramallah to see family and friends.” Khoury said that after wasting so many hours waiting in line, he and his colleagues at work began exchanging information on traffic backups through Facebook.

Within weeks, in January 2012, the Facebook group had a few hundred members. Its numbers quickly grew as people saw the importance and the usefulness of the group. Today, it's reached nearly 32,000 members. But with success came problems, and users began attempting to use the group for political or even financial gain. Some wanted to publish articles or political statements; others wanted to promote businesses or commercial services. “We had to make the group closed and restrict postings only to status reports about the roads leading to the checkpoints,” Khoury told Al-Monitor. He said he had to enlist the help of his wife, Dareen, and colleagues Ammar Ledawiyeh and Ali Freitech. The four became an ad hoc committee screening the large number of people who wanted to join the group and took turns administrating.

The success of the group lies in the information that users voluntarily contribute to it. At almost any hour of the day, at least one of the 32,000 users is crossing the checkpoint and posting its status. “Traffic coming from Jerusalem is backed up, but leaving Ramallah is smooth,” wrote Ahmad. Hanan gave more specific reports: “The road from Jerusalem is backed up to the Qawasmi gas station.” “Don’t go to Hizma. It is backed up to Mikhmas,” Safwan said. Another post by Ashraf provides pictorial evidence from his phone's camera of how bad the traffic leading to the checkpoint going into Ramallah is.

For the Palestinians to upload real-time information and photos using their cellphones is not easy. If they are subscribed to the Palestinian Jawwal Cell company, they are unable to access the Internet because of Israel’s restrictions on the use of 3G. Israel claims that it cannot allow the Palestinian company use of 3G networks, but allows the Israeli companies access to 3G.

“Many of our Facebook group members subscribe to Israeli cell companies to be able to use 3G to both get information on-the-go and post information using their mobile phones. Those not signed up with the Israeli companies have to wait until they get home or to work and post from there,” Khoury said.

“The problem,” he went on, “is that the traffic might become jammed within a short period of time.” Tanya explains the situation in more detail. “All it takes is the changing of the Israeli soldiers and the arrival of a soldier with a bad attitude and within minutes, what was reported as an acceptable line of cars in Qalandia could become like a busy parking lot, with cars waiting for a long time.”

Khoury is unhappy with how some Palestinian drivers eager to make it in or out of Qalandia form extra lines parallel to the one already there that in the end create a total jam. “The Israelis who are responsible for this mess don’t care, and the Palestinian police are not allowed to reach the area to organize traffic,” he said.

Khoury and his friends tried to reach Israeli media outlets, but none cared. He said, “We got Arab media to cover our Facebook group, but neither Haaretz or Yedioth Ahronoth responded to our calls to talk to us about the problem.” Khoury praised local Palestinian volunteers who are trying to ease traffic, but feels that a more strategic solution is needed.

Khoury said that many people have approached him to turn his group into a revenue-generating one or to push certain political issues. “My goal is not the group, per se,” he argued, “but solving the problem thousands of Palestinians face every day. Hopefully, the day will come when we will no longer need the group.”

When Tanya is about to finish work at her educational institution, she again checks the group for the checkpoint traffic into Ramallah. If it is backed up, she stops by a friend's for coffee and keeps checking to see the best time to return home.

“This group is a godsend. I have been able to better organize myself and not waste hours sitting in the car totally at the mercy of a 19-year-old Israeli soldier with an attitude. Now I can decide when the best time to go is, and if I need to go quickly, I will choose which route will get me home in the shortest time,” she said.