Daoud Kuttab reports on the restrictions and limits on cell phone and wireless internet use faced by Palestinians, and the importance of full membership in the International Telecommunications Union. 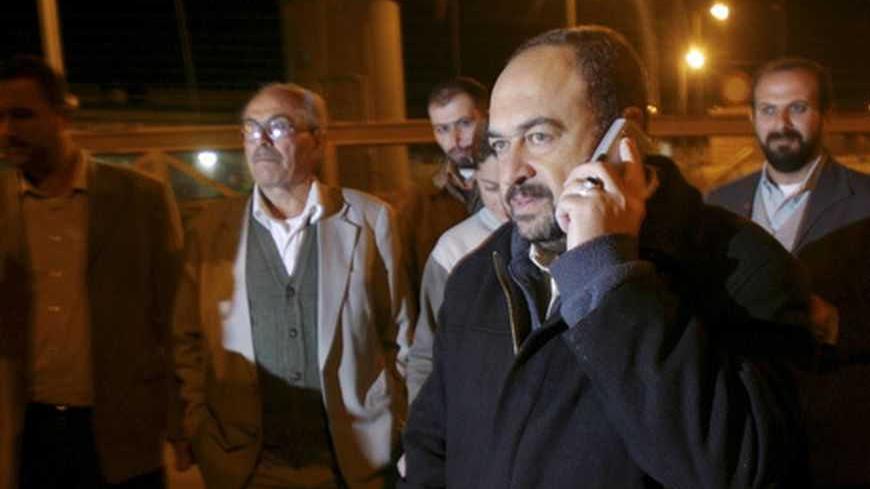 Palestinian Public Works and Housing Minister Abdel-Rahman Zidan of Hamas speaks on his cell phone at a checkpoint near the West Bank city of Jenin, Nov. 29, 2006. - REUTERS/Mohamad Torokman

Whenever I travel from Jordan to the state of Palestine, I have to use three different cell-phone devices, each with a different SIM card. I need to keep my regular Zain Jordanian cell and therefore I put it on phone roaming. But in Palestine I need to use two other cell phones.  Jawwal, the leading Palestinian cell company is a must whenever you are anywhere in Palestine; most people have Jawwal numbers and to ask them to call any other service provider would be a financial burden on them.  Palestine does have a second provider, wataniya, but this new provider doesn’t have the same agreement with Zain as Jawwal, which allows you to receive calls from Jordanian Zain subscribers when you are in Palestine without extra charge.

But Jawwal, which has good signals in places like Bethlehem, Hebron and Ramallah, flashes out of service literally the moment after you cross the Bethlehem or Qalandia checkpoints into Jerusalem. In Jerusalem the only cell-phone service providers are Israeli. I therefore have a cellcom number where the cost of the calls are slightly less expensive than Israel’s leading cell-phone company, Pelephone. Both Israeli telephone operators work throughout the occupied state of Palestine but in some hills of Ramallah their service is not so great.

While my three phones help cover my audio needs, I have a bigger problem with data. I used to keep my roaming service from the Jordanian Zain on, but I quickly discovered that I would have to pay exorbitant prices for data roaming.

Data exchange on cell phones requires 3G phones and support. Many people in Palestine now have smart phones with 3G service, but they are unable to use them with their Palestinian phones. Not that the Palestinian cell companies don’t want and can’t provide the 3G. The problem, as stated by Ammar Aker, the CEO of Paltel Group, which owns Jawwal, is political.

Meeting with the president of Sesame Workshop in his office in Ramallah last week, Aker made it clear that the Israelis are barring the Palestinians from the service: “We have a license from the Palestinian ministry of telecommunications and we bought the appropriate broadcasting equipment but the Israelis are refusing to allow us to use 3G.” Over a year ago, Aker’s company imported the equipment but it has been sitting in an Israeli warehouse awaiting the political decision to allow it entry. No one seems to know why the Israelis are refusing the entry of this equipment. Is it for security reasons or are the Israelis simply acting as protectors of the Israeli companies that can freely sell 3G service to anyone subscribing to the Israeli cell telephones?

While Israel claims to keep broadcasting its cell phones in the West Bank due to the presence of Jewish Israeli settlers in the occupied Palestinian territories, it has no such claim in Gaza, where the Israelis withdrew their settlers.

Talking about the absence of wireless Internet in Gaza, Aker makes a strong argument. If Palestinians, especially in Gaza, are not receiving wireless Internet, where are they going to get their information? How can one make an argument for changing the hearts and minds of Palestinians when the mosque (and satellite) are among the main sources of information for the besieged population, he argued.

The Palestinian leadership has been contemplating which of the many international agencies they will join after receiving recognition by the UN as an observer state. While Palestine has an observer plus membership in the International Telecommunications Union (ITU), the vote at the UN ensures that an overwhelming majority of ITU members will vote for Palestine as a full member. With such a vote, Palestine will be able to table motions and vote in the powerful international union that sets regulations for all member states. For the time being, Palestinian leaders are not rushing to apply for full membership in any of the international agencies. However, Palestinian officials have made it clear that when the time comes, the ITU will be among the first for which Palestine will apply for full membership.