Israeli 3G SIM cards all the rage in Gaza

SIM cards allowing 3G service on Israeli telecommunications networks are being smuggled into Gaza and snapped up quickly by young Palestinians. 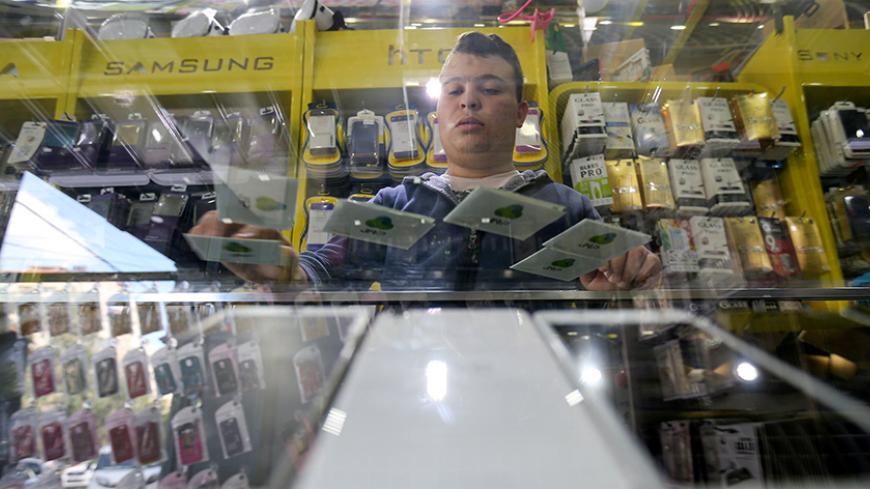 GAZA CITY, Gaza Strip — After almost completely disappearing from Gaza Strip markets in the 1990s, Israeli SIM cards are once again available because of a demand for 3G services, an option not offered by Palestinian telecommunications companies, which only have 2G technology. The cards have swept across the Palestinian market after entering Gaza through unknown channels, while Palestinian officials and security agencies warn against using them because of the security risk they potentially pose.

The pay-as-you-go SIM cards can be purchased for 50-70 shekels ($13-$18). After inserting the card into a phone, the user sends a short text message to the company providing service. The company then deducts a service fee from the card credit to activate 3G service. Compared to 2G technology, 3G technology is faster and has better bandwidth, making it more compatible with smartphone functions, including access to GPS (the Global Positioning System), mobile TV, video calls and video transfers.

Ziad Dib, licensing director general at the Communications Ministry in Gaza, told Al-Monitor that the Palestinian Authority has prohibited the use of Israeli communication devices, including SIM cards, since the establishment of the Palestinian Telecommunication Company (Paltel) in 1997. He said that Israeli SIM cards almost disappeared from the market when Paltel began operations, but have recently reappeared despite his ministry's efforts to prevent the smuggling of any type of communication devices connected to Israel. Dib claims his ministry is in constant contact with the security apparatuses to stop companies, shops and individuals from selling the cards because they are illegal and compete with Paltel services.

During a Nov. 13 press conference, Paltel executive director Ammar al-Aker estimated that some 370,000 Israeli SIM cards were already being used illegally by Palestinians in the West Bank and Gaza before the new cards arrived in the past few weeks. He claimed that their use costs the Palestinian telecommunications sector around $100 million in annual losses.

Article 98 of the Palestinian Telecommunications Law No. 3 (1996) and Article 60 of the Palestinian Telecommunications Regulatory Authority Act (2009) stipulate, “Importation, illegal trade or holding of telecommunications devices violating the adopted standards and specifications or containing wrong information shall be punished by three months in prison at least, or one year at most, or fined 1,000 [Jordanian] dinars [$1,410] at least, or 2,000 dinars [$2,820] at most. Both penalties may apply together with confiscation of the seized devices.”

Hazem el-Baz, information security professor at Al-Aqsa University in Gaza, told Al-Monitor that the new SIM cards are particularly sought after by the younger generation, which wants to take advantage of 3G services. He pointed out that there had been problems with coverage only working well near the Gaza-Israel border and in some highland areas of Gaza, but said the Israeli telecommunications companies had resolved the problem by increasing the signal strength from their communications towers near Gaza to cover a larger area.

A street vendor in Gaza City said he finds the government's warning against the use and trade of the cards odd. “Why are all these warnings being made? It is just a chip, similar to the Palestinian chips, but with 3G services, which are not available in the Gaza Strip. Also, they can be bought at a low price, and one can use them to make phone calls and have access to the internet,” he told Al-Monitor. Palestinian SIM cards cost $2.50, but as noted, the Palestinian companies, Jawwal and Wataniya Mobile, do not offer 3G service.

The vendor concluded, “The reports about security risks are exaggerated. The Palestinian chips can be tapped by small businesses specializing in information security, let alone by powerful intelligence agencies like Israel’s.”

Islam Shahwan, an independent security expert and lecturer, told Al-Monitor, “The chips pose various risks given the electronic [surveillance] by Israeli intelligence of Palestinians in Gaza in order to gather information about the Palestinian resistance by tapping the largest possible number of mobile phones.”

Shahwan believes that the Israeli intelligence services’ need for information has grown after campaigns in 2014 and 2015 by the Palestinian security services against collaborators resulted in dozens being arrested and executed. He noted that the hotspot for espionage is in the border region, where there are underground operations for tunnel digging and weapons storage. Shahwan believes the security services need to intensify warnings against the SIM cards through the media or by closing the holes through which they enter Gaza.

The controversy over the SIM cards comes amid expectations that Palestinian companies will launch 3G services early next year.