West Bank authorities are combating the use of black-market Israeli telecom services, which Palestinians prefer over the pricier internet packages offered by local operators. 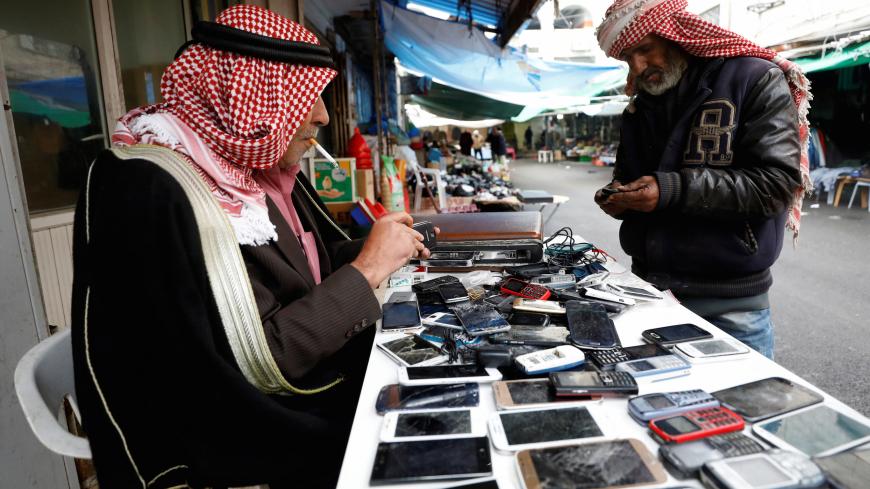 Police discovered the cards, which were hidden inside a vehicle, June 27 in the city of Dura. Smuggled SIM cards have cost the Palestinian economy dearly, and in April 2017, the Palestinian public prosecutor barred all shops and telecom services in the West Bank from acquiring and selling Israeli prepaid cards.

“The Israeli SIM cards have cost the Palestinian economy losses ranging between $450 million and $1 billion over the past three years," Suleiman al-Zuhairi, undersecretary of the Palestinian Ministry of Telecom and Information Technology, told Al-Monitor. "The Palestinian Authority [PA] has lost about 90 million shekels [about $25 million] a year in taxes that were supposed to go to the Palestinian treasury. The Israeli telecom companies do not pay any taxes or have any financial obligations toward the PA in return for the services they sell to Palestinian consumers.”

Israeli telecom companies have strong mobile signals, using boosters set up across the Israeli settlements in the West Bank, which improves reception on Palestinian mobile phones.

Zuhairi explained that Israeli prepaid SIM cards account for 20% of the cards on the Palestinian telecom market, which is tantamount to having a third telecom operator, besides the two main companies, Jawwal and Wataniya Mobile. Jawwal has more than 3 million subscribers, while Wataniya Mobile has 1.2 million, according to the financial statements of each company for the first quarter of 2018.

In January, both telecom companies launched 3G internet services. This, however, didn't discourage Palestinians from acquiring Israeli SIM cards. Israel for years prevented the West Bank from offering 3G service until Israel launched its 4G system, allowing Israel to maintain its superiority. Israel still limits the Gaza Strip to 2G service, which is slower and has fewer options.

Reem Zaanoun from Ramallah told Al-Monitor she prefers Israeli cards because they provide the faster 4G service for lower prices than the local mobile operators.

Israeli cards are sold on the black market through intermediaries and sellers who usually have good relations with SIM card dealers and smugglers, she said.

In a Jan. 24 interview with Ajyal Radio FM, Ammar al-Aker, CEO of Palestine Telecommunications Co. (Paltel), promised that Jawwal, which is affiliated with Paltel, would review its prices on a regular basis and improve its 3G service “to clean the Palestinian market of the Israeli cards.”

Economic analyst Mohammed Abu Jiab told Al-Monitor Israeli telecom companies offer the same prices for Palestinians in the West Bank and to Israelis in Israel. “The Israeli telecom companies don't pay any taxes on their services in the Palestinian territories, which gives them more leeway to compete with the local operators in the Palestinian territories, whose mobile fees remain expensive in comparison,” he said.

Abu Jiab added that the PA is also fighting Israeli SIM prepaid cards to combat cybercrimes since the authority can't track down cardholders.

He said launching the 3G high-speed internet in the West Bank has helped reduce the gap between the service quality of Israeli and Palestinian telecom operators. “The Israeli 4G internet service, however, remains in the lead,” he said, stressing that his ministry is coordinating with the police and customs services to prevent smuggling.

Louay Bani Awdah, public relations director for Palestinian customs, told Al-Monitor, “In 2017, about 8,000 Israeli SIM cards were confiscated. The smuggling cases are referred to the public prosecutor, who in turn brings them to the Palestinian courts.”

He noted that during 2017, there were 46 cases against traffickers and smugglers who faced various penalties, including fines and prison time. “This year, we made a pledge to continue to fight and prevent the spread of the Israeli cards. We are adamant about achieving this mission,” Awdah said.

Meanwhile, the analyst Abu Jiab said the PA will face challenges in trying to clear the cards from its market. The PA is toothless in the Israeli-controlled Area C, which makes up 60% of the West Bank.

“I believe the best solution to this dilemma is for both our local mobile operators to provide competing offers that would outstrip the Israeli companies,” he concluded.