As Israel stations an Iron Dome anti-missile battery in Tel Aviv, Israelis fear missile attacks on their major cities and wonder: Will Israel be prepared? 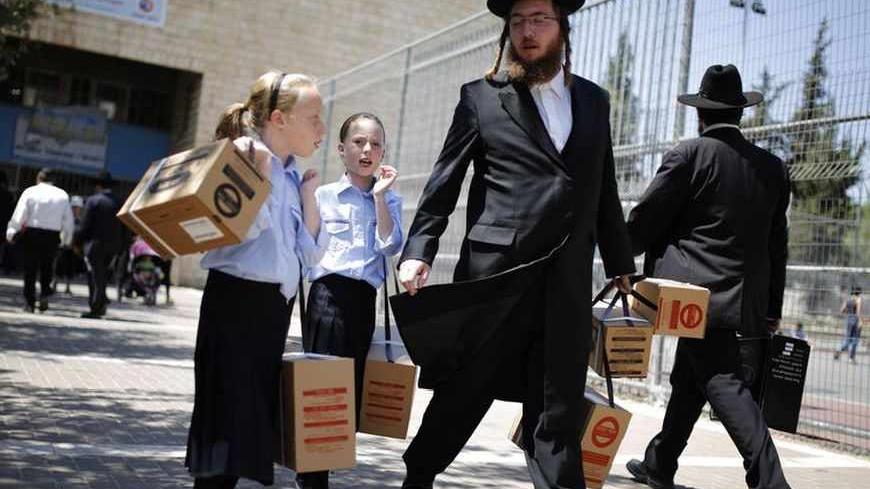 An ultra-Orthodox Jewish man walks out with his children after collecting gas mask kits at a distribution point in Jerusalem, Aug. 28, 2013. - REUTERS/Amir Cohen

Beneath the manicured sunken flower garden of Tel Aviv’s Habima Square lies Israel’s first municipal nuclear and chemical weapons shelter. While aboveground, Israel’s national theater and the newly renovated Philharmonic Hall border the square, down in the bunker, the walls are flanked by stacks of emergency water containers. Close to the ceiling, there’s just enough room for an air-filter system designed to repel the toxic gas from chemical weapons.

Almost three years after the start of the Arab Spring, the clouds of war are gathering around Israel. As the United States contemplates a strike on Syria, senior officials from Damascus and Tehran have threatened that Israel will bear the brunt of their wrath should the attack go ahead. But while the situation in Syria is the most imminent concern, Israel is also seeing other dangerously volatile fronts opening up.

In the south, global jihad-affiliated militants in the lawless Sinai region of Egypt have launched several rocket attacks targeting Israeli citizens, most recently in Red Sea resort town of Eilat. Rocket attacks from the Hamas-controlled Gaza Strip have also increased in recent weeks. From Lebanon, four rockets were fired by al-Qaeda-inspired cells into northern Israel only last week. Violence has escalated in the West Bank since the beginning of 2013, and the recent killing of three Palestinians by Israeli soldiers has provoked further riots and cast a shadow over the peace talks.

Israel is preparing for war on all fronts, against old, new and sometimes barely known foes, facing missiles which for the first time can target with precision Israel’s major cities all over the country. The scenes of panic characterized by long queues outside gas mask distribution centers this week show that Israelis understand that they can no longer be secure in the knowledge that the IDF, the Middle East’s strongest army, would be able to keep the violence hundreds of kilometers away. Many also remember the Iraqi Scud missiles that rained  down on Tel Aviv during the  first Gulf War in 1991, followed by the three-weeklong barrage of rockets from Hezbollah in 2006, and most recently the unprecedented missile attack on Tel Aviv by Hamas in November 2012. Yet all these might very well appear to be a mere dress rehearsal to what is lying in store.

“They used to call him Shasha the Crazy (Shasha Meshuga in Hebrew) in the media,” says Sara Paperin of Western Galilee Hospital, situated just 6 miles from the Israel-Lebanon border. She is talking about the hospital’s former director-general, who was convinced of the need to build an underground hospital even back in the early 1990s. “They crucified him in the media, because it seemed to them like he wanted to take government money and just throw it underground.” But in 2006, when more than 800 missiles landed within a 1-mile perimeter of the hospital — and one directly in its ophthalmology department — the doctor was vindicated. Today, the hospital has “more protective beds — below and above ground — than in our entire hospital capacity.” This is being replicated across the country where entire hospitals, complete with sophisticated surgery equipment, are now being built underground in anticipation of rockets from Lebanon or Syria, or even farther afield.

“Today, if you intend to build any kind of hospital structure in Israel, the Ministry of Health stipulates that you state how many protective facilities you will build,” says Paperin. With the hospital being so close to the Lebanese border, local residents don’t even have 10 seconds to run for cover. As such, the hospital has a policy which during times of war accommodates not only the hospital staff, but all their immediate family members too. “Otherwise, how would you get the staff to come to work?”

Fifty kilometers [31 miles] away, the town of Kiryat Shmona has earned itself the morbidly dubious honor of being nicknamed "Kiryat Katyusha" after the 2006 Israel-Hezbollah war. “Hezbollah shot around 4,000 missiles that landed in Israel,” says Kfir Maoz, CEO of the Kiryat Shmona Community Center, “and 25% of them landed here.” Today, the town has more shelters per person than anywhere in Israel, and a trauma center providing aid for the victims of shock. “We want to live in peace and quiet, like Switzerland, like Canada,” says the director. “But we are prepared. In 2006, we waited for a week or two for the government to take control. Today, we won’t wait for anyone, we are preparing ourselves.”

Back in Tel Aviv, emergency evacuation drills have been performed everywhere from corporate skyscrapers to concrete bunkers near the city’s white, sandy beaches. The measures even extend to the  paperwork involved in purchasing property, where there is now an "Iran war" insurance clause.

But many worry that this is not enough, especially when it comes to unconventional warfare involving chemical weapons. “The Habima shelter is very unique because it’s a public shelter, and you have to understand that it’s also a very good one with a very high level of protection,” says Col. Yehiel Kuperstein, former head of IDF’s Home Front Command’s Physical Protection Department. “But the main problem of this shelter is that it is probably not going to be available for the people, because most people in Tel Aviv do not live next to it. So if an attack takes place during a concert, it will be fine, but if it will be one hour later, this fabulous shelter is going to stay empty.”

In Jerusalem, the municipality is tearing its hair out about how to protect the Old City and its ancient, world-renowned sites of pilgrimage, holiest of holy for Christians, Muslims and Jews all over the world. During the most recent war in November 2011, rocket fire from Gaza targeted the holy city of Jerusalem for the first time. According to Col. Kuperstein, “The physical potential of rockets hitting Jerusalem exists, because the range of the missiles that can be launched from Syria can cover the entire state of Israel.”

Yet amid the scramble to obtain gas masks and clearing the cobwebs from the bomb shelters, questions are raised on whether the Israeli government has been neglecting some of the bigger threats lurking right on its doorstep. Some of Israel’s major infrastructure installations have the potential if hit to cause catastrophic environmental damage and mass human casualties. The Haifa ammonia plant is a case in point: Located in Israel’s third-largest city, it is assumed to have a vastly greater explosive power than the Texas fertilizer plant that exploded in April 2013, killing 14 people and leaving 200 injured. Haifa municipal authorities having been pushing hard to relocate it away from the highly concentrated city — but so far, the government has displayed what some people consider an astonishing sangfroid.

Increasingly, opposition groups, political pundits and commentators are asking whether the best safety measure for Israel would be to embark on a new political course. Even senior cabinet members such as Justice Minister Tzipi Livni have warned against Israel’s growing isolation and vulnerability. Many others argue that the best security measure for Israel in the long term is to accelerate the peace process and encourage rapprochement not only with old foes and established adversaries but also with the new, emerging political factions around the country’s borders.