Despite the war in Syria, some students from the Golan Heights are still crossing back into Syria to continue their university studies. 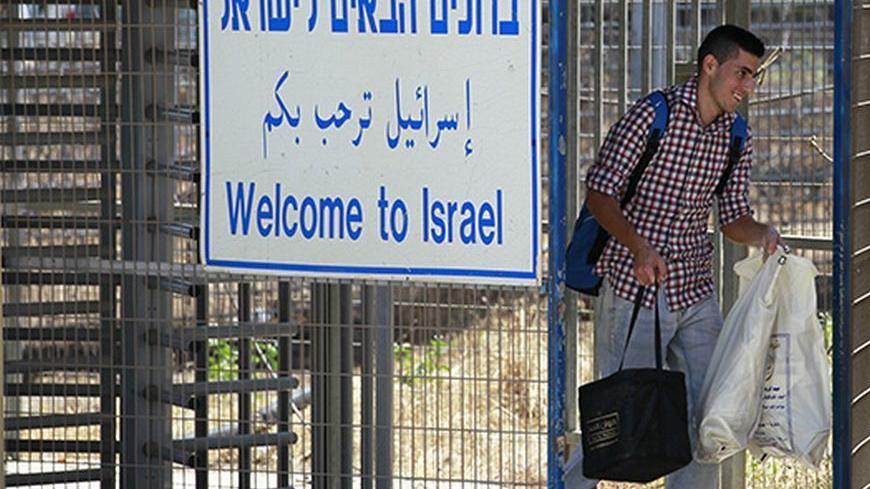 A student studying in Syria crosses the Quneitra border crossing between Israel and Syria, as seen from the Israeli side of the Israeli-occupied Golan Heights, July 11, 2013. - REUTERS/Baz Ratner

Quneitra, GOLAN HEIGHTS — In the sweltering August heat, Majid (not his real name) was sweating while studying for an upcoming exam. The difficulty was not in the complexity of the material, but rather in the fact that the examination hall was going to be in an active war zone, in Damascus. While thousands of Syrians are trying to flee the atrocities in their homeland — which have so far claimed over 110,000 lives — Majid is one of 35 students who returned from their peaceful villages in the Israeli-occupied Golan Heights to the country ravaged by a civil war that has been raging for more than 2½ years. More than 30 more students are set to travel back to Syria later this month.

Druze and Alawite youths from the Golan Heights have been coming to Syria for decades to study at the University of Damascus. The reasons for this are both ideological and practical. Many of the students’ parents and grandparents were born in Syria, but found themselves under Israeli rule after the Israelis captured the Golan Heights in the 1967 Six-Day War and later annexed it. The Damascus government has encouraged the students by waiving university fees and providing a small monthly stipend, which continues to be distributed even today. In Israel, entry requirements for competitive courses such as medicine are considerably higher.

According to the International Committee of the Red Cross (ICRC), up until March 2010, studying in Syria was very popular among the Druze and Alawite youths of the Golan Heights. More than 300 students crossed the border with Syria back and forth each year. This year, however, there are no new freshmen. About 70 students who are coming back are all in the final years of their lengthy medical or pharmaceutical degree programs. Dropping out for them would mean years of wasted hard work and the daunting process of starting over. But going back to Syria carries risks that students and parents alike would rather not think about.

“Just because the students are crossing into Syria does not imply in any way that the situation in Syria has improved,” said Ran Goldstein, the ICRC spokesman. The ICRC acts as a mediator between the Israeli and Syrian governments in facilitating the crossings as well as providing humanitarian aid within Syria. Goldstein added that the situation in Syria is “extremely difficult,” particularly concerning “access and security.”

This is at the forefront of the minds of many students.

“Last night, I couldn’t sleep,” said Majid the morning before his crossing. “I kept thinking about whether to stay here instead. But I can’t change at the last moment. My goal is to complete my studies. So I’m going.”

On the morning that Majid crossed back into Syria, news broke out of the mass chemical weapons attack just outside Damascus. When asked about the incident, one father of a student waiting to cross the border looked angry. “It’s not true,” he said. “Media reports are 90% false, only 10% accurate.”

Even despite the subsequent confirmation of the attack and threats of a Western-led military intervention in Syria, students returned — albeit in depleted numbers. Another parent who agreed to let his daughter go back to complete her studies, said that she has assured him that the situation was safe enough.

“She said that the terrorism is outside of Damascus, 30-40 kilometers [18-25 miles] away,” he said. “Part of the family didn’t agree to let her return. But I said to her, ‘If you feel you should go back there, then I am with you.’”

The atmosphere at the crossing itself is hectic and charged. Druze sheikhs in traditional black garb stand alongside crisp-shirted community leaders, all delivering versions of angry, emphatic political manifestos to the media. The students and their families are embracing each other, wiping away tears. They are reluctant to talk, only too aware that any wrong word may be used against them and their families in Syria. As the students start to cross into the UN-controlled no-man’s-land, one elderly woman cries after her grandson, before collapsing to the ground in tears.

When a truck arrived at the crossing and opened its doors, suddenly dozens of boxes and crates appeared as people rushed to cram them inside for delivery to their relatives in Syria. The containers and bulging suitcases — at least five or six per student — are stuffed full of jars of pickles, bottles of cooking oil, bags of rice, grains and the popular Middle Eastern staple labneh (cheese). On each crate, a name of the recipient is scribbled in Arabic. Almost everyone present has family in Syria. The relatives are unable to meet, but are in regular contact with one another. Across the Druze villages, many funds have been raised for the relatives across the border, where the situation remains dire.

The ICRC reports that “more than two years of fighting have had a major impact on every aspect of life in Syria. Untold numbers of people have become displaced, been killed, gone missing, become disabled, detained or separated from family members, to name but a few calamities that have affected the country.” According to the Syrian Arab Red Crescent, there are now close to 5 million displaced people in Syria.

Back in the Golan Heights, the Druze are viewing the situation across the border with worry and apprehension. Members of the 20,000-strong community have traditionally mostly identified with the Syrian regime and, as a result, have largely declined Israeli citizenship. The war in Syria has put this to a brutal test.

One Druze village, Majdal Shams, has been holding competing pro- and anti-Assad protests for months. More and more Druze are defying the accepted norms and are applying for Israeli citizenship. According to Israeli government figures, 2012 showed a sharp increase in such requests, particularly among the younger population.

Meanwhile, the students going back hope that the year passes quickly and trouble-free for them to complete their studies. “In this situation, you reach a point when you have to set your feelings aside from what you have to do,” said Majid. “I think I want to stay here, with my family, but what can I say — that’s life.”