Following the recommendation of a prominent think tank, Israeli investors fear that the European Union will decide to "mark" Israeli banks that operate in the West Bank, devastating the entire Israeli banking system. 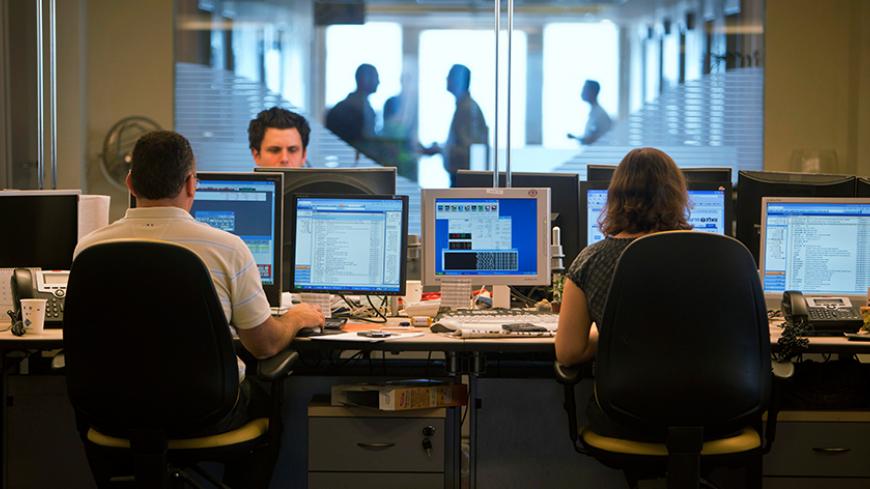 Brokers look at screens in the trading room of an investment bank in Tel Aviv, Aug. 7, 2011. - REUTERS/Nir Elias

A few weeks ago, the European Council on Foreign Relations, a prominent international think tank, released a paper recommending that European banks and the European banking system at large boycott the Israeli banks that operate in what it called the “occupied territories.” The release of that document set off a wave of angry protests in Israel. The EU tends to adopt the council’s recommendations, so Jerusalem saw it as a significant escalation in the campaign of boycotts and embargoes against Israel.

In response, the EU invested considerable effort into assuaging Israel’s fear. After the document was published, official sources in the EU reportedly said that they are not considering adopting the recommendations listed in the position paper. Sources in the EU’s offices in Israel reportedly said that they have it on authority from Brussels that the EU does not plan to take action against Israeli banks operating across the Green Line.

This statement did manage to calm things down, at least temporarily, especially in the Israeli media. On the other hand, Israeli banks are far from calm. Behind closed doors, they are planning for a possible “diplomatic and economic tsunami” that would turn them all into pariahs. In internal discussions within the banks, the possibility of a “credit marking” by the EU, meaning that each Israeli bank commercially active in the West Bank could be blacklisted by Europe, is considered an “economic mega-assault” that could lead to a complete shutdown of the Israeli economy.

As one senior Israeli banking official told Al-Monitor on condition of anonymity, “When they talk about marking merchandise produced in the settlements, we can still absorb the damage and get over it. We can lose a few markets here and there, but it is not a death blow. Moves like that pose no strategic threat to the Israeli economy. When they are talking about the credit marking of Israeli banks, it is a whole different matter. There isn’t a bank in Israel that is not involved in economic transactions across the Green Line, from mortgages to business loans. It would be very serious if all those banks got added to the EU’s blacklist. And the problem isn’t limited to economics, either. It’s a political issue, too. We’d have to ask the prime minister for a government safety net.”

The banks add that it is important to note what the Europeans actually mean when they talk about the “occupied territories.” They are not limiting themselves to Judea and Samaria. For them, these territories include the Jewish neighborhoods of East Jerusalem, the Golan Heights, Highway 433 connecting Tel Aviv to Jerusalem and even a short stretch near Latrun of Highway 1, the main road linking Tel Aviv to the capital. Every bank that has a branch in Ariel (Judea and Samaria) or Katzrin (the Golan Heights) would be added to that blacklist.

Israel is currently investing billions of shekels in a high-speed rail line to Jerusalem. If that investment ends up being marked, European banks will not be able to lend Israel the money for it. There isn’t a bank in Israel that could avoid that kind of credit marking. With the Israeli banking system intimately connected to the European system, this could be a watershed moment for the Israeli economy. Every mortgage to buy an apartment across the Green Line could get added to those blacklists. That would be devastating. It is much more of a threat than the banking issue per se. It would be a nationwide incident requiring considerable thought and a national response.

The EU’s efforts to calm things down have, in fact, managed to slightly turn down the warning sirens, but they haven’t turned them off entirely. “It is true that they have announced that they will not adopt that particular recommendation,” one senior Israeli banking official told Al-Monitor on condition of anonymity, “but we must not forget that the situation is fluid. A gun that appears on the table in the first act will usually be fired in the third act. The diplomatic situation could continue to deteriorate. Things happen. The Europeans could reconsider their decision in six months due to ‘changing circumstances on the ground.’ We’ve seen that before. We cannot ignore these warning bells.”

All this is happening at a time when the Israeli economy seems to be growing stronger, more stable and more promising. Unemployment is at an all-time low. The government deficit is low as well, the high-tech industry is breaking its own records year after year and Israel has positioned itself as an international leader in cyber technology. Almost any country in Europe would want to trade places with Israel economically. What they wouldn’t want to trade places on is the mood. For the past few months, Israel’s economic elites have sank into what can only be described as clinical depression. The overall mood is at a low and concerns are high. More and more Israeli venture capitalists and entrepreneurs are reconsidering their investment portfolios.

“It is true that the economic situation looks stable and that the numbers look good,” one major Israeli investor told Al-Monitor this week on condition of anonymity. “The problem isn’t the numbers, but the direction that Israel is headed. More and more people think that Israel is a lost cause. The future looks murky. Nothing good is threatening us.”

One leading figure in the Israeli market who controls an enormous economic conglomerate was even more unyielding in his appraisal of the situation. “It’s not the economy, stupid,” he told Al-Monitor, asking that his name not be divulged, quoting the famous slogan from US President Bill Clinton’s 1992 campaign. “It’s the direction. [Prime Minister Benjamin] Netanyahu was elected by an overwhelming majority of the public, but major manufacturers and entrepreneurs can see and feel what the real situation is. They see deteriorating relations with the United States, political and social extremism, the country’s devolution into a pariah state ostracized by the rest of the world and the fact that there is no diplomatic solution on the horizon. There is not even any hope for one. All of that has a deleterious effect on people in general and on investors in particular.''

To put all this into perspective, it is important to stress that these kinds of dire predictions have been heard rather regularly throughout Israel’s history. For the most part, so far, they never came true. Israelis are an optimistic people, and the vitality of Israeli society has never suffered over the years. Every year, international surveys come up with the same results: Israelis are among the most optimistic people in the world. They are relatively happy with their lives and they are full of vim and vigor.

How that fits with all of the dismal prognoses above is Israel’s big riddle. It is possible that the issue isn’t a matter of economics or security, but of psychology. When Israelis look around themselves and see what is happening in the rest of the Middle East, they realize how lucky they are.