Displacement has left Iraq’s Yazidis with very little, driving some to seek to leave the country and others to despair. 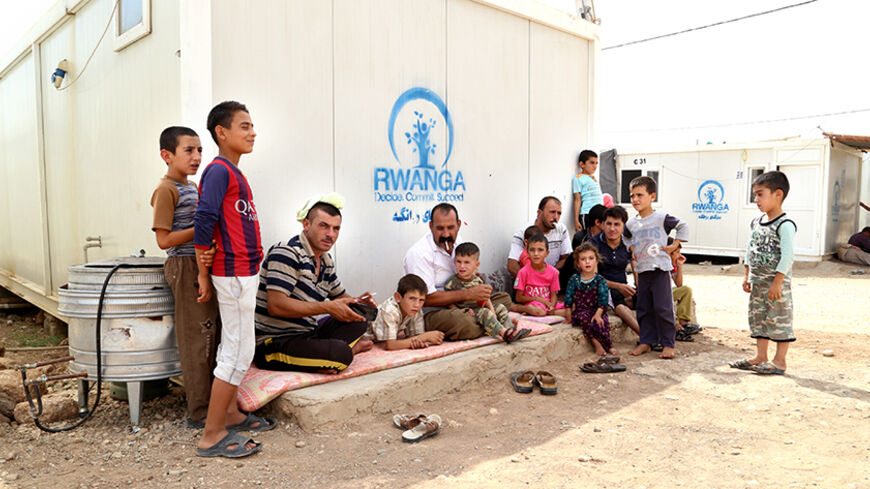 Izzat Abbas (C) holds his son while sitting in the shade with Khalaf (L) and other Yazidi refugees in the Rwanga refugee camp in Iraqi Kurdistan, August 2015. - Mohammed A. Salih

DAHUK, Iraq — Izzat Abbas, along with a group of men and children, took refuge in the shade by a prefabricated cabin in a refugee camp for displaced Yazidis. They chat and occasionally laugh while they try to keep their spirits up. But their sunburned faces show more exhaustion than content. The temperature is 47 degrees Celsius (116.6 Fahrenheit) and there is no electricity, which causes the camp residents to flee cabins they described as being as hot as "ovens."

"It's just unbearable," Abbas, 40, said of the excessive heat. “There is little electricity. We get it for three hours and then no electricity for the next three hours. We are given water [by the government] only one hour per day."

Ismael Mohammed, the deputy governor of Dahuk who is in charge of matters involving the refugees and internally displaced persons, told Al-Monitor that nearly 450,000 Yazidis have been scattered around 14 camps in Dahuk province since Aug. 3, 2014, when they were uprooted by the Islamic State (IS) from their historical homeland in Sinjar in western Ninevah province. He said, “Many have also settled in the cities or outside Dahuk.”

Those in the Rwanga camp, halfway between the cities of Dahuk and Zakho close to the border with Turkey, are perhaps among the luckiest. They are living in prefabricated cabins, while the majority of the other camps are sprawling tent cities with little protection against the forces of nature.

A sense of loss and despair is common in those camps. As if losing their homes and valuables was not enough, many have to grapple with systemic obstacles that make their lives much harder. In their haste to escape from the invading IS fighters, Khalaf and his family, like many other Yazidis, lost their Iraqi national identity documents. Khalaf has been trying to obtain a new one, as in the rigidly bureaucratic Kurdish system the national ID card is needed for almost everything.

"I make a living as a driver but can't get a driver's license because I don't have a national ID card," Khalaf said. "They must take our condition into consideration and treat us differently. We escaped from death and brought nothing with us except the clothes we were wearing."

Although some such as Khalaf complain that the process of issuing IDs is "very slow," the deputy governor said a few centers to expedite the process have been set up.

More than 20 miles miles away, in Sharia camp, Elias Haji, 65, is sitting in a carpeted tent. He and his extended family of 11 were lucky to escape in February from a village near Tal Afar where they were held by IS. Having experienced the ordeal of being displaced, Haji has adjusted the bar of his expectations.

"We're sitting here. Nobody has helped us much … but at least it's better for us here," said Haji, sporting a red turban and a long white garment that many Yazidi men wear.

Kurdish officials say they are burdened by the recent large influx of internally displaced persons and refugees and are not able to cope with the rising levels of demand for public services.

According to Mohammed, in Dahuk province the population has increased from 1.2 million to almost 2 million in just three years. Plummeting oil prices and the cutting off of the Kurdish government's budget by the Iraqi government because of oil disputes have caused serious financial restraints.

"It's a heavy burden on the infrastructure," Mohammed said. He said around 20% of Dahuk's electricity output goes to internally displaced persons and refugee camps, and added, "We call on the international community to provide more assistance to us to be able to better manage this situation. It's beyond our capacity at the moment.”

Faced with the hardships of living as internally displaced persons and scarred as a community by the brutality of IS, many Yazidis, especially young people, appear to have lost hope in having a future in Iraq.

As a result they are migrating north toward Europe. The preferred destination for many is Germany, where there is a large Yazidi community estimated at around 60,000.

Standing by a wood pole outside a ramshackle shop by the entrance gate to Rwanga camp, Hazim, 19, was feeling down. Two of his close friends recently made it to Germany, and he can't stop thinking about how he can get there, too. But would-be immigrants generally must go the illegal route and are at the mercy of human traffickers who sometimes abandon them in the middle of the perilous journey across mountains, seas and woods.

"What should I stay here for?" Hazim asked. "I'll most probably end up as a restaurant or hotel employee, and even if we return home we will go back to destroyed homes and untrustworthy neighbors."

Many Yazidis have lost trust in their Muslim neighbors, as many of the neighbors collaborated with IS; unemployment is a major challenge the dispossessed and impoverished Yazidis have to deal with.

As he fans himself with a piece of thick paper, Abbas, who was a construction worker and just about managed to make ends meet before becoming an internally displaced person, lamented that he would have to try for years to get back to the point where he was before the IS attack.

"I have no job now and rely on my brother, who is a peshmerga fighter, to get by," he said. “I've tried to get a job, anything, even as a cleaner, but it's been impossible."

In a country torn apart by conflict, tormented Yazidis are not sure what kind of homeland they would return to or just what kind of future awaits them if IS is expelled from Sinjar. For now, families such as Abbas' are patiently hoping for more assistance to make essential ends meet.