Four years after genocide, thousands of Yazidis languish in Turkey

Displaced Yazidis who fled from IS' brutality to Turkey have been languishing in camps and tenements for years, hoping to reach the West. Their departure threatens the survival of one of the Middle East’s oldest religions. 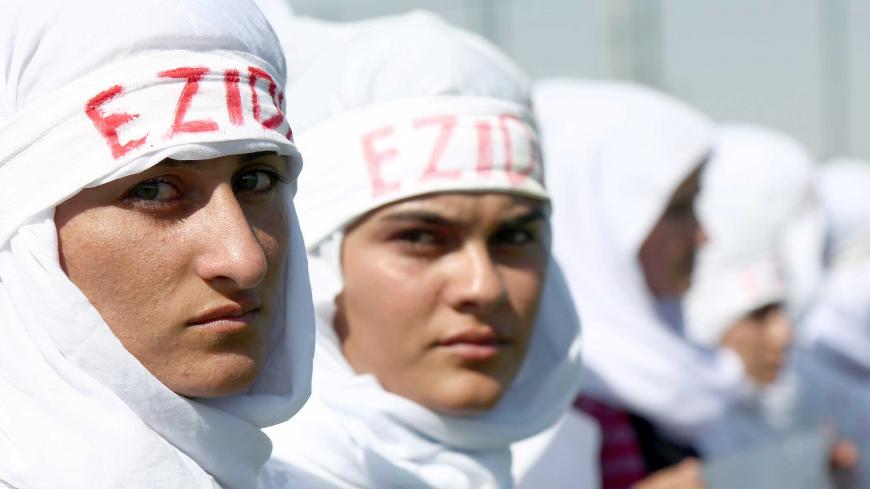 Yazidi women attend a demonstration at a refugee camp in the Kurdish-dominated city of Diyarbakir, Turkey, Aug. 3, 2016. - REUTERS/Sertac Kayar

UGURCA, Turkey — Survivors of the Islamic State (IS) attack on Iraq’s Yazidi community, who have taken refuge in southeast Turkey, marked the grim anniversary this month, praying at sunrise and sunset as they do each day in quiet remembrance of those lost in the 2014 genocide.

The refugees, living in a small cluster of tents in this village some 100 miles from their homeland, are among the few thousand Yazidis still in Turkey eight months after the Iraqi government declared victory over IS. Too terrified to return home, they are trapped in limbo as they seek asylum to begin their lives anew in the West. Remaining in Turkey is not an option, they say.

“I miss my country, but I know there is no peace, no safety, no change,” said Sahira, 20, her face framed by curls, smiling even as she shares her fears. “It is still very dangerous. People who have gone back say ‘Don’t come; it’s very bad.’ For us, Iraq is no more."

“We want to go to a peaceful place, but we don’t know when. My life passes in this camp.”

In August 2014, IS jihadists swept across the Yazidi heartland of Sinjar in northern Iraq, massacring at least 10,000 people within days and driving tens of thousands more, including Sahira, up Mount Sinjar without food or water until US airstrikes opened a corridor for their escape. Sahira walked through mountain passes for a week to reach Turkey.

More than half of Iraq’s population of 650,000 Yazidis have been displaced, mostly within Iraq, while 30,000 or so crossed the border into Turkey and an estimated 5,000 are still here, dispersed in cities as well as two refugee camps near the border. Turkey also hosts 3.5 million Syrian refugees and hundreds of thousands from Iraq, Afghanistan and elsewhere.

For many Yazidis, the flight to Turkey was a reversal of one their forebears took, settling in Iraq in the last two centuries to escape poverty and persecution. At the turn of the last century, southeast Turkey was still home to about 300,000 Yazidis, according to Amed Gokcen, a researcher who has written extensively about the Yazidis. Today, there are fewer than 1,000.

Now, the exodus from Mesopotamia imperils an esoteric faith that stretches back millennia, retaining some traditions of ancient Roman cults and tenets of Islam, Christianity, Alawism and Zoroastrianism.

The IS onslaught is the last of 74 persecutions Yazidis endured over the centuries, mostly at the hands of Muslim rulers who falsely believed them to be devil worshippers. A central doctrine of Yazidism is that the fallen angel repented and abolished Hell and was redeemed by the omnipotent God. He is revered in the form of Melek Taus, the peacock angel.

“Despite their tragic history, Yazidis have survived because they did not abandon their homeland. There was a tradition in Sinjar of resistance and protecting their faith,” said Ali Atalan, a Yazidi and former opposition lawmaker in the Turkish parliament. He is now part of an organizing committee working to create a World Yazidi Congress.

“But this last genocide has wrought irreparable damage because they have now spread to the four corners of Earth. It appears that Yazidis will not survive in the Middle East. They face annihilation,” he told Al-Monitor.

Before the influx from Iraq, just six members of a single family remained in Ugurca, a Yazidi village in Batman province. The area’s 50 other families moved to Germany in the 1960s as laborers, then in the 1990s amid violence between the Turkish state and Kurdish militants.

“It is impossible for [Iraqi Yazidis] to consider staying in Turkey, another land where their ancestors were killed. These tales of massacre are passed on as inheritance,” Gokcen said.

In Ugurca, Sahira, her parents and five siblings share two tents on a small rise overlooking a wide plain. Rain and snow blow into her tent during the winter, and in summer the temperatures hover above 40 degrees Celsius.

The camp is home to 150 people, half of them children. Women launder clothes by hand and prepare communal meals in a makeshift kitchen, relying on handouts from sympathetic neighbors.

Fewer than 1,000 Yazidi refugees are housed in a state-run camp about 60 miles away. Atalan and locals said authorities are preparing to shut the facility, arguing security in Iraq and Syria has improved sufficiently. No one could be reached for comment at Turkey’s Migration Management agency, which oversees refugee camps, to confirm any such move.

Far direr are conditions endured by the 300,000 or so Yazidis in overcrowded camps in northern Iraq, with insufficient food and medical supplies and tents that may not survive another winter, said Ahmed Khudida Burjus, the deputy executive director of Yazda, a nonprofit promoting justice and support for Yazidis.

“It is good here, but we want to leave,” said Sahira, who did not give her surname. “The situation in Turkey is like Iraq for our religion. In Europe, our religion is not a problem.”

One of her brothers has moved on to Germany, first crossing the Aegean Sea to Greece, where millions traveled in 2015 and 2016. Some Yazidis still attempt the route that Turkey has largely sealed after the European Union agreed to pay a 6 billion euro aid package.

Some 2,800 Yazidis in Turkey have applied to the UNHCR, the United Nations’ refugee agency, spokeswoman Selin Unal told Al-Monitor in an email. “Resettlement is a long process that may take months or more than a year, depending on the resettlement countries and their procedures.”

In reality, it takes far longer, Burjus said, with applicants told they will wait seven years or more. He said only 5,150 people have been formally resettled in Germany, Australia and Canada, while some 100,000 Yazidis are waiting for asylum in Iraq.

“The UNHCR is not making Yazidis a priority, even those who were enslaved by IS [despite the risk] of genocide or extinction,” he said. Countries “are not granting refugee status to Yazidis, saying IS is finished. But the ideology remains and its supporters can reawaken and kill Yazidis again.”

The United Nations considers the atrocities carried out against Yazidis genocide. Dozens of mass graves have been unearthed in Sinjar after IS’ reign of terror, and some 3,000 Yazidis are still missing. More than 6,000 Yazidis, mostly women and children, were captured and enslaved by IS fighters.

Atalan said last year he helped remove three kidnapped children held in the Turkish city of Gaziantep, and he suspects that hundreds more may be in Turkey after being brought here by Syrians and Iraqis.

These crimes have gone unpunished, making a return to Sinjar unthinkable for most Yazidis, said Burjus. “No one has been prosecuted for the genocide against Yazidis. Without accountability, without giving justice to Yazidis, no one can say this will not happen again, that they will be protected. Both Iraq and the international community must have a proper mechanism for justice and reconciliation.”

For now, Sahira spends her days preparing meals or studying language textbooks, eager to practice the English she learned at school before her escape. She will study engineering when her family is reunited in Germany, she hopes.

She knows her ancient faith may be doomed once Yazidis are severed from their homeland. “One day, all of the Yazidis will leave. Without peace, we cannot live in our lands. And peace will not come,” she said.