Iranian negotiator Seyed Abbas Araghchi said that Iran had decided to achieve an "irreversible" amount of progress in nuclear program before entering new round of talks. 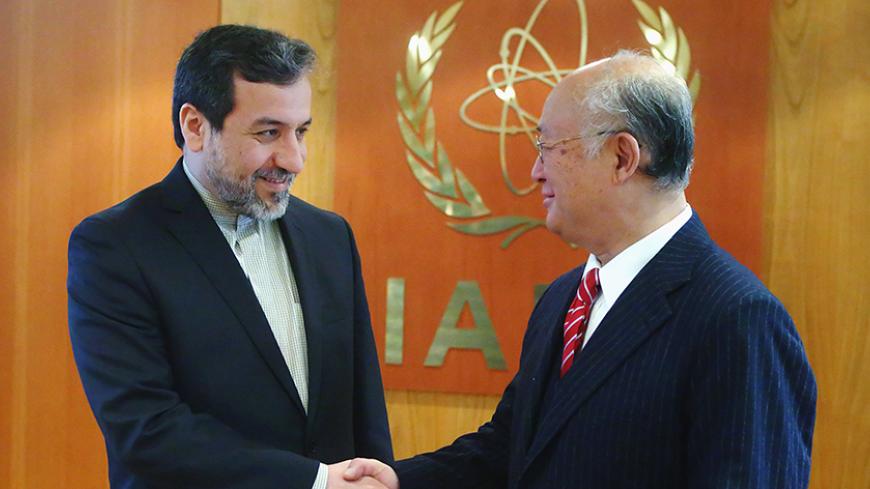 Iranian nuclear negotiator Deputy Foreign Minister Seyed Abbas Araghchi spoke to the Iranian journal Diplomat Monthly about the nuclear negotiations and the different circumstances facing the last three administrations in Iran. The news website Entekhab selected some key passages from the interview that shed light on how Iran changed its tactics in its nuclear program and the negotiations during the last three Iranian administrations.

Discussing the 2003 Saadabad agreement and later the 2004 Paris agreement between Iran and the so-called EU3 (Britain, France and Germany), Araghchi said, “When the nuclear controversy began, Iran decided to enter negotiations with the three European countries. The situation at that time was that apparently America was after another war in the region and the Europeans came forward and in their own beliefs to stop a new war.” Mohammad Khatami was president at the time, and Hassan Rouhani was one of the key Iranian figures to negotiate the deal.

During Mahmoud Ahmadinejad’s presidency, Saeed Jalili headed nuclear policy. “Ahmadinejad entered the scene with new forces to consolidate the system’s policy that we have to push forward the nuclear program in consideration of the probable sanctions [they will cause],” Araghchi said. By “the system” Araghchi means the Iranian state as a whole, including elected and unelected centers of power. Araghchi continued, “The system decided that it wanted to become nuclear and to pay the costs of it.”

With regard to the EU3 agreement, Araghchi said, “We suspended our activities for approximately three years in order not to pay the costs of the UNSC [United Nations Security Council] resolutions. But we reached the result that this wouldn't work. So we decided to become nuclear and defend our peaceful nuclear rights.”

He continued, “The actions of the two sides (our pursuing a nuclear program and increasing sanctions from the other side) went forward until we reached a point that our hands were full from a nuclear perspective, meaning we had reached an irreversible point. When our hands were full, there was no point in paying the costs. So we went after consolidating our achievements. This is how we went after a new round of talks, with our hands full.”

Araghchi said, “During the last 10-12 years, the principle of our nuclear policy has been constant. However, I do not deny that if someone says that had we behaved in a different way — in tactics, not in principle — it was possible that our costs would have been less.” He continued, “It’s possible to say that had we pursued a certain method earlier or later, had we done more or done less, we would have paid fewer costs or we would have gotten better results. This discussion is always there. But could we have become nuclear without costs? Certainly not. We had to pay the costs. Everything has a cost.”

On Supreme Leader Ayatollah Ali Khamenei’s involvement in the nuclear talks, Araghchi said, “The details of the negotiations would be reported to the supreme leader — meaning that after every negotiation a complete detailed report would be given to him.” He likened the relationship between Khamenei and the nuclear negotiators to that of a commander who gives the orders but it is the soldiers on the front line who decide how to hold the gun. He also stressed that the nuclear negotiators “observed the red lines” of the supreme leader.