Before Piling on New Sanctions, Give Rouhani a Chance

The election of Hassan Rouhani as president of Iran may be a diplomatic opening to prevent an Iranian nuclear weapon, so the US Congress should not undermine it with more sanctions. 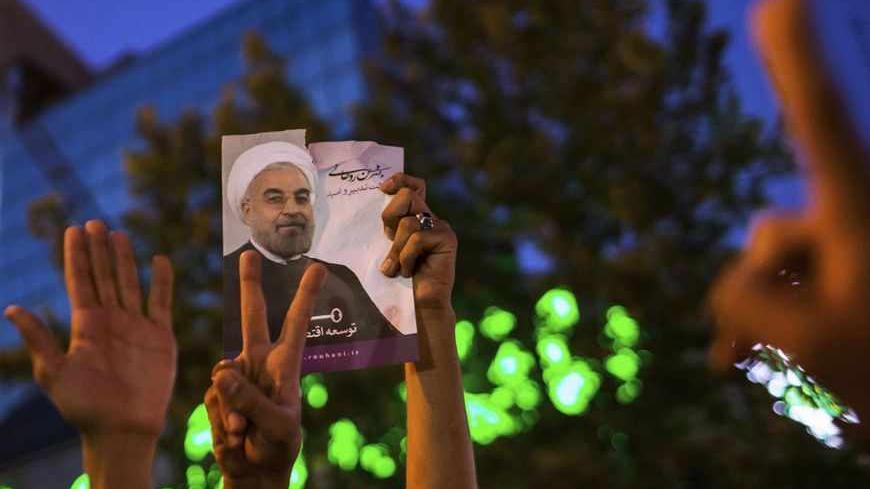 Supporters of Hassan Rouhani hold his picture as they celebrate his victory in Iran's presidential election on a pedestrian bridge in Tehran, June 15, 2013. - REUTERS/Fars News/Sina Shiri 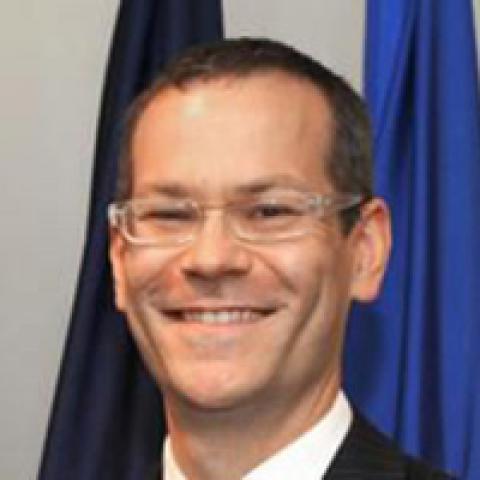 There is widespread agreement in Washington that Iranian acquisition of nuclear weapons is unacceptable and that all options should remain on the table to prevent this outcome. There is also a broad consensus that an enduring diplomatic solution to the nuclear crisis is preferable to military action against Iran — a step that would delay but not end the country’s nuclear program and could unleash further instability in an already tumultuous region. Both an Iranian bomb and bombing Iran could prove disastrous, but with each passing day, Tehran’s continued nuclear progress brings us closer to one of these two futures.

The surprising June 14 election of moderate Hassan Rouhani, a former nuclear negotiator who campaigned on improving Iran’s economy and relations with the world, as Iran’s new president may provide an opportunity to move beyond the nuclear impasse. Indeed, in many respects, Rouhani’s election represents a repudiation of the policy of “resistance” on the nuclear program pursued by Supreme Leader Ayatollah Ali Khamenei and outgoing President Mahmoud Ahmadinejad, which has produced Iran’s growing isolation and its economic devastation.

But a number of narratives and policies taking hold in Washington, especially on Capitol Hill, could squander this opportunity, making the least desirable outcomes — a nuclear-armed Iran or another war in the Middle East — more likely.

Opponents of engaging Iran have already deemed the election worse than irrelevant, accusing Rouhani of being a wolf in moderate sheep’s clothing. These critics accuse Rouhani, who has held senior positions in the Iranian government for decades, of complicity with a series of regime actions, including the 1994 bombing of an Argentina Jewish Center and the crackdown on Iranian students in 1999. According to this view, Iran’s new president is simply a more pleasant face on an evil regime — a tyranny that must be confronted and not negotiated with.

Rouhani is no card-carrying reformer. Although he is considerably more pragmatic than the conservative presidential candidates he vanquished, including the current hard-line nuclear negotiator Saeed Jalili, there is no question that Rouhani is a regime insider. He served as national security adviser from 1989-2005 and, before his election, served as Khamenei’s representative to the National Security Council. While some of the harshest charges against him appear to be false, Rouhani has been consistently associated with the highest echelons of the regime and is thus at least indirectly tainted by much of the regime’s appalling behavior. Regardless, from the perspective of US national interests, the case for diplomatic engagement remains strong. Both the Bush and Obama administrations have held discussions with the Islamic Republic, despite its long track record of reprehensible acts. And just as the United States historically negotiated with other problematic governments — including the Soviet Union, Mao’s China and North Korea — when doing so was imperative to advance key US objectives, Washington needs to continue talks with the Iranian regime to resolve the nuclear issue.

Other critics have argued that Rouhani’s track record as a nuclear negotiator a decade ago suggests he cannot be trusted on the nuclear issue. They contend that Rouhani plans to assume an apparently reasonable posture and lull the United States and the other members of the P5+1 (China, France, Germany, Russia and the United Kingdom) into endless talks as a means of delaying further international pressure and buying time for advancing Iran’s nuclear program. As the Foundation for Defense of Democracy’s Mark Dubowitz writes, Rouhani’s record “demonstrates more deception than moderation.”

In some respects, this concern is understandable. As Iran’s chief nuclear negotiator from 2003 to 2005, Rouhani brokered Iran’s voluntary suspension of Iranian enrichment activities. But in his past writings and during the campaign, he often described his policies as primarily designed to forestall international pressure, thereby enabling Iranian nuclear progress. Rouhani also believes Iran has a right to enrich uranium and to nuclear technology more broadly.

Nevertheless, it is not at all clear that Rouhani desires nuclear weapons or sees the pursuit of the bomb as in Iran’s interest. His past speeches suggest that he may see Iran’s mastery of enrichment technology — something the Islamic Republic has already achieved — as sufficient to deter Iran’s foes; in other words, a full-fledged nuclear arsenal may not be required. Moreover, Rouhani has argued that Iran’s development of nuclear weapons would destabilize the Middle East, spark a regional arms race and worsen the confrontation with the United States and Israel, leaving Iran less secure. These points go beyond the common Iranian refrain, as captured in series of religious rulings issued by Khamenei, that pursuing nuclear weapons would be un-Islamic. By providing a strategic argument for the limited security dividends nuclear weapons would provide Tehran, Rouhani could potentially frame a more compelling rationale for compromise.

Rouhani’s campaign also made clear that he acutely understands the extraordinary economic strain the Iranian regime and society are under. To relieve the pressure, Rouhani appears open to a diplomatic agreement that would place limitations on Iran’s nuclear program and significantly increase transparency in exchange for acknowledging Iran’s rights and lifting sanctions over time. The devil will be in the details, but a deal within Rouhani’s broad framework is conceivable.

Still other skeptics accept that Rouhani may represent a moderate turn, but contend that it is largely irrelevant to the nuclear crisis since Khamenei remains the decider on national security issues. The supreme leader indeed reigns supreme on the nuclear file. However, the president has historically played a large role in shaping national security policy. He appoints the foreign, defense and intelligence ministers, as well as Iran’s lead nuclear negotiator, and chairs the National Security Council. It is also the case that the three previous presidents under Khamenei —Hashemi Rafsanjani, Mohammad Khatami and Mahmoud Ahmadinejad — produced meaningful shifts in nuclear policy, including Rafsanjani’s efforts to expand the program, Khatami’s support for Rouhani’s decision to suspend uranium enrichment in 2003 and Ahmadinejad’s push to resume enrichment in 2005, followed in 2009-2010 by his championing of efforts to swap some of Iran’s enriched uranium for fuel for the Tehran research reactor.

Moreover, whether or not the 2013 election turned out exactly as Khamenei hoped, the supreme leader acquiesced to the results. After all, Rouhani was one of only eight candidates qualified by the Khamenei-controlled Guardian Council. This may suggest Khamenei is open to considering some of the arguments Rouhani advanced during the campaign regarding the need for a nuclear compromise. Khamenei cannot help but recognize that the vast majority of the Iranian people rejected Jalili’s campaign call for continued nuclear “resistance,” a policy pursued by Iran in the last eight years.

Indeed, Khamenei may have come to this conclusion before the election, as evidenced by the scathing critique his close foreign policy adviser Ali Akbar Velayati, another presidential candidate, leveled against Jalili’s diplomatic intransigence in the days prior to the vote. There is little doubt that the supreme leader remains skeptical about the possibility or desirability of reaching a nuclear accommodation with Washington. But given the extreme pressure the regime is under, if Rouhani is able to cobble together an elite consensus on the nuclear issue moving forward, as he did in 2003-2005, he may be able to persuade Khamenei to accept it.

Given decades of distrust and the distance between the parties, a diplomatic resolution to the Iranian nuclear challenge remains challenging. But Rouhani’s election provides a glimmer of hope. The question remains: How can Washington best take advantage of this potential opportunity?

Many in Congress appear to believe the answer is clear: more pressure. Shortly after Rouhani’s election, for example, Sen. Mark Kirk, R-Ill., took to Twitter to accuse Rouhani of nuclear deception. Kirk tweeted: “With time running out, the Senate should move forward with toughest sanctions possible — rope-a-dope talks not an option.” Even if Rouhani appears less bellicose, Rep. Ted Deutch, D-Fla., has similarly argued, “We can continue to move forward [with sanctions] even as we wait to see whether there’s going to be movement coming from this new president.”

Pressure clearly seems to be affecting the regime’s calculations. A desire to reduce economic hardship may have contributed both to the popular support for Rouhani at the ballot box and Khamenei’s acceptance of the results. Based on this logic, additional sanctions could help incentivize a nuclear deal. But two caveats are in order.

First, the timing of any new sanctions matters. Rouhani needs some time to get his bearings, form his government, and convince regime hard-liners to give him a chance. Piling on additional sanctions now, in apparent disregard of the election results, could undermine this process. The imposition of sanction after sanction without a clear diplomatic approach may convince Iran’s leadership that the United States seeks regime implosion and overthrow rather than a solution to the nuclear crisis. For this reason, the United States and P5+1 should engage Rouhani before a new wave of sanctions is imposed. However, if Iran refuses to promptly resume serious negotiations or if those talks fail to bear fruit in the near term, then additional sanctions should be applied.

Second, the conditions associated with any new sanctions also matter. Draft legislation under consideration in both the House and Senate propose to close loopholes in existing oil sanctions, significantly increase pressure on the Iranian currency, the rial, and put in place other sweeping restrictions that would impose a de facto commercial and financial embargo on the Islamic Republic. Proponents tend to frame these crippling measures as essential to alter Iran’s nuclear calculus, but according to media reports, some versions of the proposed legislation would keep sanctions in place until the regime releases political prisoners, fully respects human rights and moves toward a free and democratically elected government. These are all laudable goals, but nesting them within sanctions ostensibly designed to support nuclear diplomacy would have the opposite effect. Tying new sanctions to non-nuclear issues such as human rights, democracy or terrorism would make them effectively irreversible, even in the event of a nuclear agreement, undermining the regime’s motivation to strike a deal. Moreover, while measures that hold the regime at risk may assist diplomacy, signaling an irrevocable US commitment to regime change would remove any benefit from a deal and would further incentivize Iran’s leaders to seek a nuclear deterrent as the only pathway to ensure their survival. Ultimately, to succeed, pressure on Iran has to be balanced with a dignified exit ramp for the regime.

Rouhani is a regime stalwart. However, unlike the often bombastic Ahmadinejad, he is a relatively pragmatic and sober politician who is acutely aware of Iran’s national crisis. He supports Iran’s nuclear program but is unlikely to risk the survival of the Islamic Republic, a system he helped create and has protected in the last 34 years, to defend every last element of it. As such, Rouhani is someone the United States may be able to work with, and he could play an important role in convincing Iran’s supreme leader to change Iran’s nuclear course before it is too late. Neither Tehran nor Washington can afford to squander this opportunity.

Colin H. Kahl is associate professor in Georgetown University’s Edmund A. Walsh School for Foreign Service and a senior fellow at the Center for a New American Security. Alireza Nader is a senior international policy analyst at the nonprofit, nonpartisan RAND Corporation.