Is Ayatollah Khamenei Ready for Change?

The influence Iranians have on the views of Supreme Leader Ayatollah Khamenei should not be underestimated. 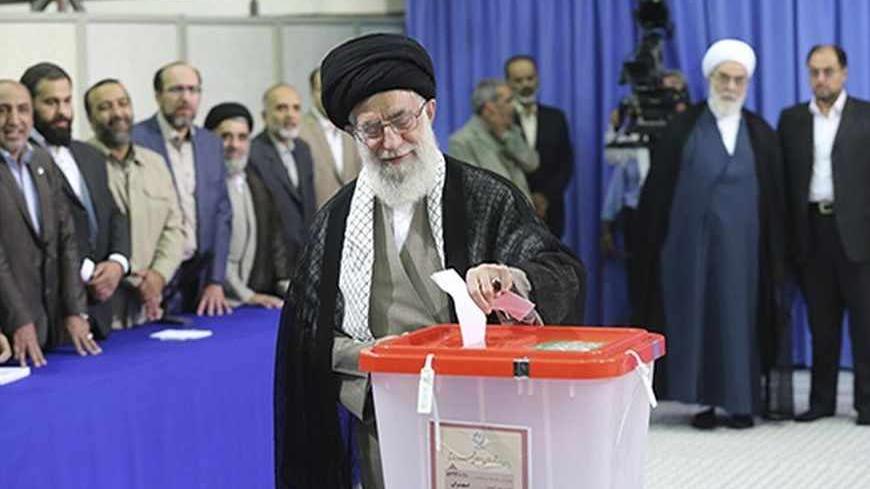 In January 1998, a few months after his election, Iran’s reformist President Mohammad Khatami held his historical interview with CNN's Christiane Amanpour. During the interview, he criticized the nascent theory of “clash of civilizations” and instead proposed a "dialogue between civilizations.” He asserted that differences between the Islamic world and the West are not born from inherent antagonism between the two civilizations, but rather that the differences emanate from lack of communication and understanding.

In practice, he was loyal to his theory. During Khatami’s eight-year presidential term, he adopted reconciliatory policies toward the West that included concessions on Iran’s nuclear program. Of the same ideological persuasion, his secretary of Supreme National Security Council (SNSC), Hassan Rouhani, was the architect of a proposal to voluntarily suspend Iran’s uranium enrichment program in an effort to build confidence with the West, then represented by the EU3 (Britain, France and Germany).

Although the effort concluded unsuccessfully when the two sides failed to reach permanent agreement on common ground, Iran's supreme leader accepted and carried out the suspension for nearly two years.

While numerous developments have decidedly increased optimism after 34 years of hostility, Iran and the United States may finally reconcile, Ayatollah Khamenei’s recent statements cast doubt on this optimism. In his Sept. 9 speech, Iran’s supreme leader asked the country’s “administration, politicians and diplomats” to analyze the West’s behavior in the framework of a “deep and fundamental conflict between Islam and the West.” This is a clash of civilizations perspective which clearly contrasts with the Rouhani administration’s published foreign policy mandate, which criticizes the theory and questions its validity.

Ayatollah Khamenei added, “Lying and pretention are the characteristics of Western politicians.” While the tone of his speech was by no means unprecedented, it does beg the question of the significance of the timing of the supreme leader's statements, as optimism with respect to Iran-West relations abounds.

One clear message to the West that Iran is focusing on through talks to end the deadlock over its nuclear program is the recent transfer of the nuclear dossier from the SNSC to the Ministry of Foreign Affairs, where Javad Zarif, an internationally known pragmatic Iranian diplomat, presides.

Meanwhile, another noticeable shift in Iran’s foreign relations compartment was the absence of customary threats and provocative words toward the United States during the recent Syrian crisis by Rouhani as the president, or any member of his administration, despite Syria’s strategic import to Iran. This radically differed from the customary response from his predecessor Mahmoud Ahmadinejad.

There are other signs that exhibit willingness by Iran and the United States to turn to a new page in their relations. Although on Sept. 11, Zarif dismissed a report released by Al-Hayat, the London-based pan-Arab daily, that US President Barack Obama sent a message to Iran, calling the message “not true.” A few days before that, Zarif had said, “It is possible that some messages [from Washington], verbal or otherwise, in different ways, were sent for the president.” Zarif also confirmed that there has been communication between Tehran and Washington with regard to the Syrian crisis. He added, “If necessary we will continue this process.”

Another positive development of major significance is the upcoming meeting between Zarif and his British counterpart, William Hague, expected to take place on the sidelines of the UN General Assembly meeting in New York from Sept. 24-Oct. 2. Britain closed its Tehran embassy in November 2011, after it was stormed and vandalized by protesters. This would be the first meeting between the British foreign secretary with an Iranian official since Ahmadinejad became Iran’s president in 2005. The meeting is not confirmed yet but according to Zarif, “The British foreign secretary has expressed his willingness for a bilateral meeting publicly and privately.” Zarif has said he has “no problem” with that.

Addressing the question of why, despite all these positive developments, Ayatollah Khamenei made detractory statements, there are a couple of possible explanations. It could be argued that the move was aimed to undermine Rouhani and his reconciliatory approach toward the West, to maintain the status quo. However, this notion is likely inaccurate.

Iran’s supreme leader knew Rouhani’s mandate from the onset of his election campaign, and while many observers in the West predicted that, as a result of vote rigging, the conservative candidate Saeed Jalili would be Iran’s next president, Rouhani won more votes than the five other conservative candidates combined.

Moreover, Rouhani is not a newcomer. He has been Ayatollah Khamenei’s confidante, as well as his representative in the SNSC for 23 years, until this year’s June elections.

In addition, in his statements on Sept. 5, Ayatollah Khamenei set the tone for flexibility on interactions with the rest of the world when he orated, “As long as red lines are not crossed … artful and heroic flexibility in all the political arenas are accepted.” Many observers in Iran interpreted this as support for Rouhani’s synergetic foreign policy.

Another, perhaps more likely, explanation to Ayatollah Khamenei’s remarks is that they were a message to the West not to miss this opportunity to make a deal with Rouhani. A former Iranian diplomat suggested — in confidence — that Ayatollah Khamenei’s remarks were a message to the West: “If you miss this opportunity, you’ll have to deal with me [Ayatollah Khameni] ,” and in fact, this is the Iranian government's way. Rouhani represents an opportunity to reach diplomatic compromise on multiple fronts with Iran.

Rouhani’s political credentials are unique. Since he has served as the secretary of the SNSC for 16 years — he spent eight years as the head of parliament's foreign policy committee, and he was Iran’s chief negotiator from 2003 until 2005 — he understands both foreign policy and the Iranian nuclear crisis.

The breadth of his experience in navigating Iran’s politics and the confidence that the nezam (political system) has in him is unmatched, placing him in a unique position to negotiate with Iran’s supreme leader and members of Iran’s SNSC — as well as with foreign powers. The voluntary suspension of the uranium enrichment between 2003 and 2005 happened thanks to Rouhani’s negotiations with actors both inside and outside of Iran.

Many Western officials believe that Rouhani’s election does not equate, or even allow for, change in Iran’s policies because ultimately the supreme leader makes decisions. However, Iran’s supreme leader is not immune from the influence of the people around him — which is a human trait — and cannot ignore his citizens’ desire for change, evidenced by millions of votes for their country’s sitting president.