More than a hundred Egyptian fishermen were arrested four months ago by the Sudanese navy, released and then arrested again in what some see as a Sudanese bid to pressure Egypt to release 24 Sudanese nationals. 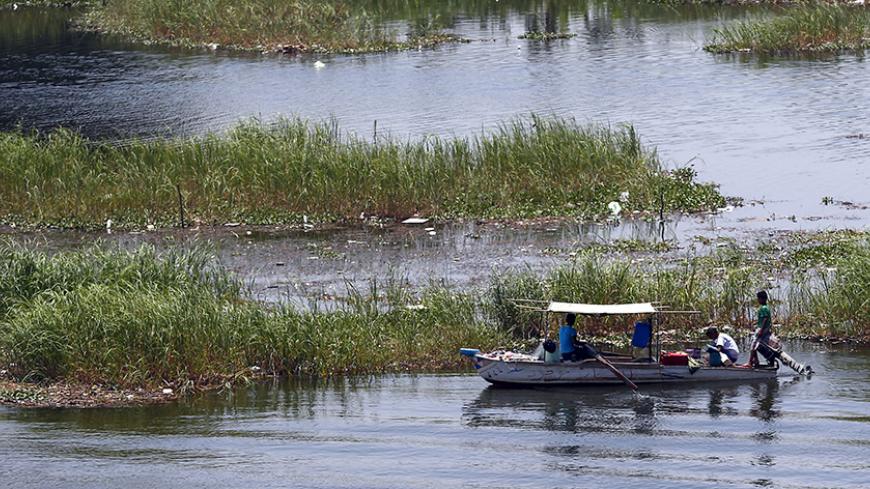 A fisherman travels on a boat during low tide on the Nile River in Cairo, Egypt, June 5, 2015. - REUTERS/Amr Abdallah Dalsh

CAIRO — Since April 7, the Sudanese state has held 101 Egyptian fishermen from the fishing boats Hoda Al-Rahman, Princess Malak and Princess Mariam. The fishermen were on their way to Eritrea to fish when the Sudanese navy arrested them April 7 for invading Sudanese territorial waters and fishing without a permit. One elderly man was excluded from the case, while six youths were deported to Cairo.

The boats' owners, who were not on board, hired Sudanese attorney Intisar Suleiman, who appealed against the court’s judgment and won an acquittal July 23. The three retained boats were also released.

That day, the fishermen were transported from Port Sudan prison to Osif Port, where the three boats were held. As the Egyptians were about to board, the Sudanese authorities intervened again, arrested and detained them until the next morning, July 24. They were taken back to Port Sudan prison, where they arrived at 9 a.m. sharp.

The Port Sudan prison warden refused to put them behind bars as the prosecutor had just released them the previous morning and he had no court orders to imprison them. Thus, the Sudanese authorities held an urgent court session on Friday, July 24, a weekend day in Sudan, during which the fishermen were accused of spying, a charge that was not brought during their first trial.

Abu al-Hassan added, “Holding a court session on a Friday and calling the same judge who convicted them the first time as well as adding charges that did not even exist at first is proof of foul play and political motives behind this case.”

He also called on Egyptian President Abdel Fattah al-Sisi and Sudanese President Omar al-Bashir to “resolve this case because there are 101 Egyptian families that have not heard [from] their fathers for the past four months. Mothers had babies while their husbands were behind bars, while some fishermen lost a parent and could not be there to receive condolences.”

Mohammad Alloushi, owner of the Princess Mariam, told Al-Monitor, “This is a political case. The Sudanese navy intercepted the Egyptian boats April 7 at a distance of over 55 miles from the Sudanese coast. An Egyptian fisherman took a picture and a video of the Sudanese navy and the GPS device on the fishing boats to prove the boats’ location in the territorial waters. In addition, when the Sudanese authorities searched the boats, they did not find a single fish in the freezers [which means they had not been fishing in Sudanese territorial waters]. The court took this into consideration when it acquitted them.”

Alloushi added, “The Sudanese authorities legally crossed the line several times, as a judge who had already convicted the fishermen sentenced them to prison. The authorities also appealed against the prosecution's orders to release the defendants. It is known that an appeal can only be filed against a judicial judgment and not against the prosecutor's orders. In addition, the appeal was made after the fishermen were arrested July 23, not before they were captured.”

Alloushi wondered “how the Egyptian fishermen could take pictures of military facilities when they were in prison and their cellphones were with the Sudanese authorities, as they were only given back to them on July 23 when they were released.”

There are expectations that the fishermen's case will see some breakthroughs following the new Suez Canal’s inauguration ceremony Aug. 6, which Bashir will attend.