A little more than one year into his term, Egyptian President Abdel Fattah al-Sisi's economic policies and generous foreign aid seem to have had a positive impact on the economy, but many challenges remain. 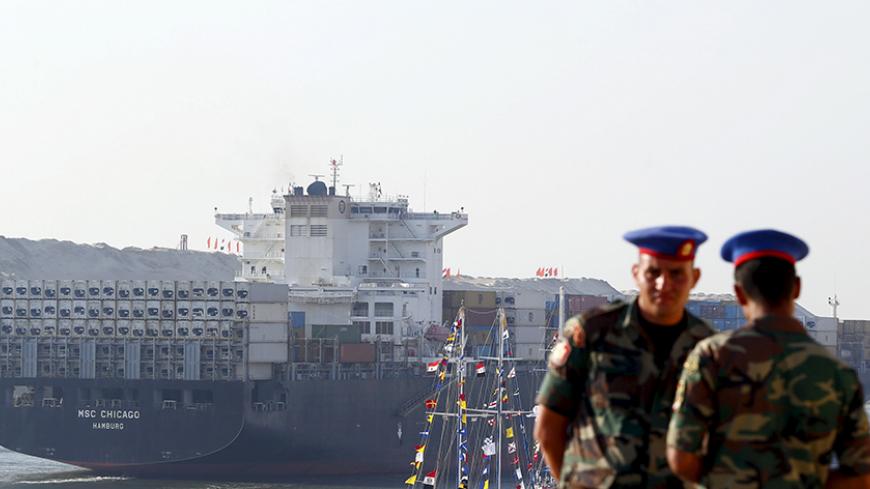 CAIRO — President Abdel Fattah al-Sisi has been ruling Egypt for more than a year now, during which the country's economy has reached a state of stability. During this period, the Egyptian government made decisions aimed at promoting economic reform and started lifting subsidies on petroleum products on July 4, 2014. Despite the relative improvement, there are still chronic problems afflicting the Egyptian economy, including the budget deficit.

Moody's raised its rating of Egypt's economic outlook from “negative” to “stable” in October 2014. In May 2015, Standard & Poor's upgraded its outlook for the country from “stable” to “positive.”

During the first nine months of the 2014-15 fiscal year, Egypt's economy achieved a growth rate of 4.7%, compared with 1.6% during the same period the preceding year, according to reports from the Ministry of Planning. The increase was made possible thanks to political stability, economic reform measures and a renewal of investor confidence, the ministry said.

When the government began lifting subsidies on energy products in early July 2014, it raised the price of gasoline.

Reham al-Desouki, former senior economist at the investment bank Beltone Financial, told Al-Monitor the economic improvement was "mainly due to the performance of the industry and tourism sectors, with the contribution of the agriculture, construction and retail trade sectors, which also improved.”

Revenues from tourism witnessed a 27% increase in fiscal 2014 compared with 2013.

The Egyptian government expects to attract foreign investments ranging from $8 billion to $10 billion by the end of the current fiscal year, which ends in June 2016, according to a press statement by Egyptian Minister of Investment Ashraf Salman in January 2015.

Desouki added that political stability, compared with previous years, reflected positively on foreign investments. He expects that by the end of the current fiscal year, foreign direct investments will increase in value over previous years, with the start of a number of projects announced during the Egypt Economic Development Conference held March 13 in Sharm el-Sheikh. Despite that increase, foreign transfers declined over the course of last year.

Another source of hard currency has taken a hit. According to the Central Bank report, Egyptian workers' remittances registered a decline for the first nine months of the year, reaching only $13.1 billion compared with $14.3 billion in the previous comparable period. Desouki said Egyptians working abroad have increased their remittances following the revolution to support the economy. But throughout the last year, as the situation stabilized, the need for remittances decreased.

Egyptian exports registered a decline of 13.8% during the first nine months of the 2014-2015 fiscal year, compared with the same period of the 2013-2014 year, dropping from $19.6 billion to $16.9 billion. This decline reflects the decrease in value of petroleum exports affected by dropping international oil prices.

The Egyptian economy still faces challenges, however. Despite the relative improvement of economic indicators, the budget deficit remains an exacerbating problem. According to a May 2015 report from the Ministry of Finance, the budget deficit increased during the nine months from July 2014 to March 2015 compared with the same period in 2013-14.

Omar el-Shenety, the founder of Multiplies Investment Group, told Al-Monitor that generous Gulf aid exceeding $15.32 billion in the last two years and high nominal GDP, with a high annual inflation rate up to about 13%, contributed to the GDP increase and thus decreased the external and domestic debt-to-GDP ratio.

According to Desouki, the most important economic step taken by the government over the past year was implementing the new investment law. She said the law will encourage investments and address the problems of investors such as dispute resolution and exclusion from the market. She added that the government's decision to allow the private sector to import natural gas is also an important decision that will circumvent the crisis faced by some factories that stopped working due to the shortage of natural gas.

Shenety believes the decision to raise the price of gasoline taken in July 2014 was the most important decision and should have been made 30 years ago to plug the state's money drain.

Desouki believes the decision to cap monthly bank dollar deposits is one of the negative decisions that affected the movement of exports and imports, in addition to that of imposing a daily limit on dollar withdrawals.

Shenety told Al-Monitor that the announced national projects — including the extension of the Suez Canal, which was inaugurated Aug. 6 — were not thought through adequately, as they consume huge amounts of money and their revenues are collected over the long term, increasing the state's financial burden.

With regard to the challenges facing the government in the coming period, Desouki indicated that the high inflation rate is another of the most important challenges that undermine the growth of private sector consumption and delay implementation of the investment projects announced at the Sharm el-Sheikh conference.