Economists say that the delayed Egyptian parliamentary elections might discourage foreign investors, whose first consideration is stability in Egypt. 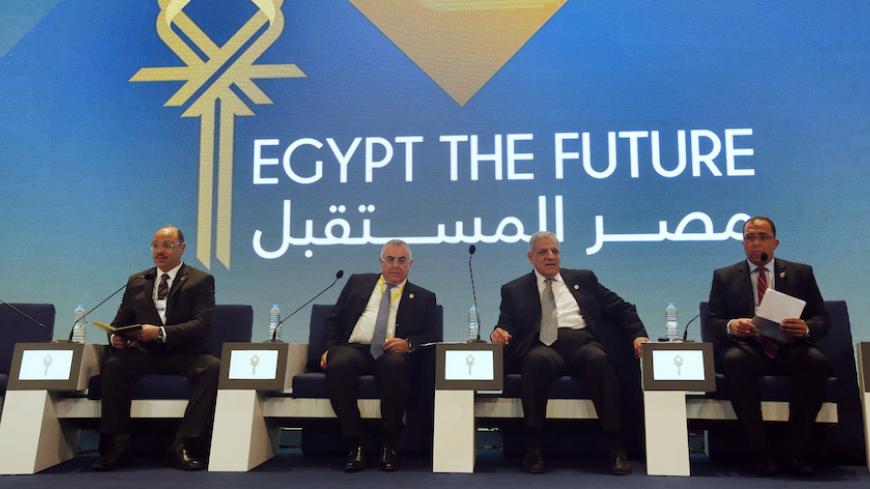 After a delay of over a year, the Egypt Economic Development Conference kicked off on March 13 in Sharm el-Sheikh with the participation of 90 countries. This would be Egypt’s opportunity to rebuild its economy by attracting international institutions and countries to invest in Egypt, helping a cash-strapped economy by raising Egypt's annual economic growth to 3.8%.

The conference, which Egyptian President Abdel Fattah al-Sisi described on his official Twitter account March 10 as the key to the future and the beginning of development in the country, is being held in the absence of a parliament.

The establishment of a new parliament was to be the third phase after the constitutional amendment and the presidential elections — three steps that Sisi pledged to undertake to rebuild the state institutions on July 3, 2013, when he was the defense minister following the isolation of former President Mohammed Morsi.

Egypt’s Foreign Minister Sameh Shoukry denied in a press statement ahead of the court’s decision that some countries predicate their participation in the conference on the holding parliamentary elections, confirming that Egypt will not accept any preconditions from any state.

Economists, however, have another opinion. According to Mamdouh al-Wali, an economist who spoke to Al-Monitor, the political conditions in any given country reflect the size of external investments in it. Businessmen rely on the countries’ Investment Attractiveness Index to start their projects. This index is determined according to several factors, including political stability, which gives an idea about the investment climate in any country and thus the likely investment level.

In Egypt’s case, the absence of a parliament suggests instability, with repercussions on two levels. First, the parliament is responsible for holding accountable ministers and officials in the event they make mistakes. With the delay of the establishment of an operational parliament, investors will have concerns about unaccountability in case of violations on the part of the government that could harm their businesses.

Second, in the absence of a parliament, Sisi has the power to issue laws and orders. His ordering that certain companies be awarded projects, which was the case regarding the first nuclear plant to generate electricity in Egypt on Feb. 10, 2015. The project was immediately awarded to the Russian Rosatom State Nuclear Energy Corporation instead of being put up for an international bid.

Omar el-Shenety, CEO of the asset management and financial consulting firm Multiples Investment Group, downplayed the impact of the delayed parliamentary elections on investor participation in the economic conference. He told Al-Monitor that there are many other factors that affect decisions on projects in Egypt, most importantly the security situation and the state’s inability to control violence in the country.

He believes that these factors have lowered expectations of the size of investments. Funds worth $100 billion were expected to be pumped in Egypt, according to the statements of Minister of Supply and Internal Trade, Khaled Hanafy, in October 2014. That amount went down to $15 billion by February 2015, according to the statement of Egypt’s Investment Minister Ashraf Salman.

Shenety also said that work in some sectors is predicated on the existence of a parliament, such as the petroleum sector, which needs parliament’s approval before awarding oil-exploration projects or land to dig wells to companies, particularly if such lands exist in areas vital to Egypt's national security.

Shenety said that the decision to delay elections could also be a good indicator to some investors, who believe that the electoral process would raise tension and the possibility of increased violence, which would result in tightened security during the polling period.

For his part, Ibrahim Fawzi, former chairman of the Investment Body, an affiliate of the Ministry of Investment, told Al-Monitor that the delayed parliamentary elections could also result in another positive point for investors. In some cases, the parliament would impede the investors’ work, as some decisions and parliamentary legislation procedures could delay the start of projects.

“Businessmen do not care about parliament, they rather seek stability in governance and that matters are being taken care of in a smooth manner,” he said.