Egypt's economic conference in Sharm el-Sheikh was considered a success in terms of agreements to foster Egypt’s economy, but some projects will only be implemented in the long run. 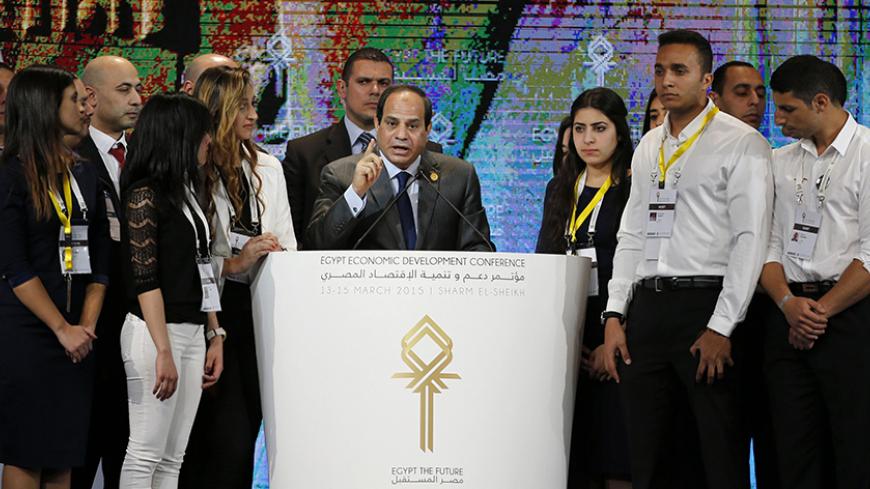 CAIRO — The Egyptian political administration received broad international and Arab support during the “Egypt the Future” economic conference, which was aimed at boosting the country’s economy following political unrest that had negative repercussions on the state budget and led to low growth rates, rising unemployment and a flight of foreign investment. Yet, following the conference held on March 13, the path ahead seems full of challenges when it comes to capabilities for building on the results of the conference and pushing forward with real steps to ensure the Egyptian economy’s recovery.

During the conference, the government announced huge investment projects, in addition to 40 agreements and memoranda of understanding being signed in the electricity, energy, housing, telecommunications and oil sectors. In his concluding speech at the conference, Prime Minister Ibrahim Mehleb said, “The initial estimate for the total investments that have been agreed upon is $60 billion, including $18.6 billion on funded projects.”

He added, “Egypt received $12.5 billion in support from the Gulf states, which will be directed at projects carried out within a year or two; this is in addition to $5.2 billion in loans and funds with the Ministry of International Cooperation.”

With this media momentum and the huge size of foreign investments brought by the economic conference to the Egyptian market, the Egyptian public seemed enthusiastic. Egyptians are awaiting rapid results and an improvement in living conditions, as citizens still suffer from the deteriorating economic situation and increased rates of poverty, more than four years after Egyptians took to the streets in the January 25 Revolution against the Hosni Mubarak regime calling for “bread, freedom and social justice.”

A report to clarify the facts issued by the Council of Ministers on March 19 noted, “The main objective of the projects proposed during the economic conference is to achieve a direct return that benefits poor and low-income [citizens] first and foremost, in terms of creating jobs and solving many of the problems that affect a wide range of citizens. These include electricity, oil, transport and housing problems.” The report stressed, “The government is keen on completely aligning with those most in need, and on meeting the needs of the poor and low-income people.”

In the first Council of Ministers meeting following the economic conference, on March 18, Mehleb issued a number of assignments to ministers based on building upon what was achieved during the conference, taking an inventory of signed agreements and examining possibilities for implementation.

Egyptian Finance Minister Hany Kadry Dimian told Al-Monitor, “Most of the agreements signed during the conference were letters of intent, not agreements that are capable of being immediately implemented.”

He added, “These letters [of intent] will now be classified, and their seriousness, importance and potential for implementation will be considered.”

While Dimian believes that the importance of the economic conference is not limited to the agreements or memoranda of understanding signed during it, he said, “The large financial package provided by the Gulf states, comprising investments and deposits with the central bank, has a great role in emphasizing the soundness and stability of the Egyptian economy.”

He added, “There are communications underway to complete the transfer of financial deposits to the central bank within days. The Gulf deposits will strongly contribute to supporting the cash reserves, and send a message of confidence that the state has sufficient resources to fund its commitments.”

Regarding the largest deal signed by the Egyptian government with Emirati businessman and chairman of Emaar Properties Mohamed Alabbar to construct a new administrative capital, Dimian said, “The agreement is a memorandum of understanding, whereby Egypt will give [Emaar] the land while the company will undertake all investments, divide the service and commercial buildings, and sell them for its own profit. Meanwhile, Emaar will give the government administrative buildings free of charge.”

According to the explanation Alabbar provided to President Abdel Fattah al-Sisi and Vice President and Prime Minister of the United Arab Emirates, Sheikh Mohammed bin Rashid Al Maktoum, on the second day of the conference, using a scale model of the new city, the project will span 17,000 acres at an estimated cost of $45 billion, and will be implemented within five to seven years.

According to press statements made by Minister of Housing Mustafa Kamel Madbouli, the general plan for the new capital will be completed and presented to the government within three months from the conference. Madbouli noted that daily working groups had been formed to follow up on the preparatory measures and complete agreements and legal procedures, while noting that the political administration had made up its mind that the capital will not be moved outside of Cairo. The latter will remain the political capital of Egypt, while the project for a new administrative capital will serve as the seat of governance.

The Egyptian government’s issuance of a number of legislations played a major role in promoting and attracting more investments during the economic conference, especially with the issuance of the common investment law on March 4. Solving several investment disputes and issuing the electricity law on Feb. 18 to ensure free and fair competition were also helpful factors. However, the question remains whether the laws can be implemented and if the executive regulations can be issued and applied.

Omar el-Shenety, an economist and executive director of Multiples Investment Group, told Al-Monitor over the phone, “In general, the economic conference was a clear success on the political and economic levels in terms of attendees and international representation.”

“I imagine the investments that will be implemented quickly are those in the field of electricity, which is one of the areas that is most in-need currently, in light of the energy crisis,” he said. He added, “Most likely the agreements related to petrol and new exploration will not be implemented within two years from now, as they need parliamentary approval.”

Regarding the real estate projects, in particular the new administrative capital, Shenety said, “The idea of creating an alternative capital could be a good thing, in light of the geographic congestion in Cairo. However, there is no need to exaggerate the [amount of] investments that will enter the country as a result of this.”

He added, “Questions remain about the priority of these projects, amid an absence in agricultural and industrial investments that would have a positive impact on growth and create jobs.”

“In general, all investments are fundamentally linked to security stability and the presence of a parliament, which will send a strong message concerning stability,” he said.

Despite the challenges and the difficulty of realizing and implementing all the agreements announced during the economic conference, the Egyptian state is still expecting the conference to have positive results in the short term. The government hopes that the state of confidence the investors and conference participants spoke of will continue, with regard to the possibilities for the recovery of the Egyptian economy and the state’s ability to protect foreign capital on Egyptian territory.