Although Egyptian officials contend that recent austerity measures are designed to protect the poor in the long term, the immediate burden will fall on low-income households. 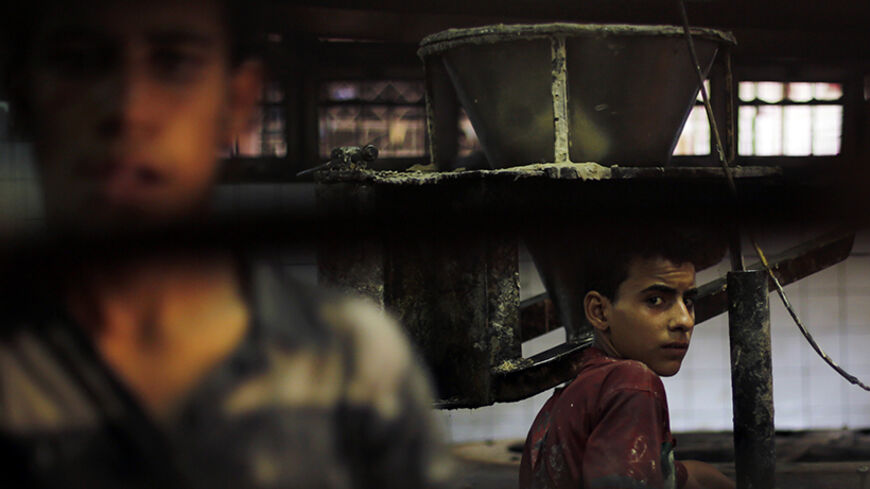 CAIRO — Just over a month after the implementation of the new state budget, the economic crisis is still lingering in Egypt — despite the Egyptian government’s adoption of strict austerity measures such as the unexpected raising of fuel prices, which was reflected in food prices and public transportation fees. This has challenged the government's position in the eyes of a population that ousted the Muslim Brotherhood over accusations that it was leading Egypt into bankruptcy.

The Egyptian government announced austerity measures as part of the general budget on July 5, aiming to reduce the deficit by 10%, equivalent to 50 billion Egyptian pounds (EGP), or $6.9 billion. This was done by partially lifting fuel and electricity subsidies, and adopting progressive taxes and broadening the tax base.

These austerity measures emerged after the Ministry of Finance’s indexes pointed toward a collapse in the economy: Inflation reached 10%, the growth rate decreased by 2% and unemployment among youth skyrocketed to 25%. Meanwhile, the public treasury was burdened with salaries and subsidies.

According to governmental statistics, “Without any reform, the total deficit would reach 243 billion EGPs ($34 billion), or around 12% of gross domestic product (GDP). Therefore, the governmental debt will be of 1.9 trillion EGP, or $265 billion, equivalent to roughly 93.6% of the GDP.”

After the austerity measures were ratified, the Egyptian government focused on gaining the support of Egyptian citizens and asking for their patience so Egypt could overcome the economic crisis. During the news conference held after the announcement of the austerity measures and the rise in prices, Egyptian Prime Minister Ibrahim Mehleb described these measures as “war decisions.” He called on Egyptians to support the government in implementation.

Egyptian Finance Minister Hani Kadry Dimian told Al-Monitor, “The general budget was set up to constitute a structural economic reform that would grant sustainability to the financial situation in the country, rebuild trust in the Egyptian economy and attract new investments."

“The government knows that lifting subsidies will mostly affect high-income classes, but will also negatively impact low-income classes. These reforms, however, will affect in the first place those who use energy the most,” Dimian added. “Economic reform decisions were related to measures taken to protect the poor through social justice projects.”

Although low-income households opposed the decision of the government, which caused an increase in prices with no or little governmental protection, Dimian said, “The social justice projects need more time to be felt by low-income citizens. This is why these reform measures will be for their best interests at the end of the day.”

Dimian told Al-Monitor what the government would do after acquiring financial resources through the lifting of subsidies: “[One part] of the money that the public treasury will gain will be allocated to reducing the budget deficit and rebuilding trust in the Egyptian economy. The other part will be dedicated to human resources, such as health and education.”

Dimian talked about projects set up by the government to protect the poor: “The poor were supported through many programs, starting with providing low-price supply goods, and ending with increasing the social security salaries.”

“Although the government is talking about the protection of the poor and low-income people, there are no real policies in this regard,” Omar Ismail, an economic researcher at the Carnegie Middle East Center, told Al-Monitor. “The austerity [measures] do not have positive effects, while some can be reflected on solving the budget deficit and raising the credit rating. But these measures will lead to inflation, whose effects will start to emerge after the first year.”

Ismail also stressed the seriousness of such government measures, saying, “The deflation effects will deepen the stagnation that the Egyptian economy is still suffering from, especially with the rise of prices.”

While officials see the austerity measures as the only way to strengthen the Egyptian economy, Ismail cited problems with the government plan. “The Egyptian government is working toward two contradictory objectives in its economic reform plan: Raise the growth rate and achieve economic recovery, while at the same time reducing the financial deficit in the state public budget that can only be achieved through new Gulf donations.”

He talked about the controversial government program for the gradual removal of energy subsidies, saying, “There are fears of the effects of such decisions, which might lead a rise of the poverty level. The income of 50% of Egyptians goes to daily consumption, in the absence of a social security network that protects them.”

Although the government heavily relied on Arab support and grants since June 2013, especially from the Gulf, the general budget shows that even amid economic challenges Egypt could not rely on Gulf or foreign grants because they were unstable, let alone that they would allow for the political outcome in Egypt to be controlled in one way or another.

A prominent source in the Egyptian Ministry of Finance told Al-Monitor, “In less than a year, we received $20 billion worth of generous Arab and Gulf grants in different forms, be they cash donation, deposits or petrol aids.”

To provide financial support for the treasury, Egyptian President Abdel Fattah al-Sisi sought after the donations of Egyptian businessmen to acquire enough financial resources to implement projects and services, aiming to enhance the living conditions of the poor.

Sisi began a fund to collect donations for the state. He announced that he would donate half of his wealth and salary. Sisi, however, seemed upset with the business elites. In his last speech during the anniversary of the Ramadan War, he said, “Businessmen did not respond enough. Will you not support Egypt? Do not think that 10, 20 or 50 billion will be enough. We should have billions so we can implement projects for the youth.”

The Egyptian government is still relying on the ability of citizens to bear the austerity measures, while it seems that the increase in prices will not be compensated soon through service projects. This will keep Egyptians angrily dissatisfied with measures whose impact is only felt by the poor.